Losing Rarely an Option for Greenshoe and Stablemates

Most of the harness world knows Greenshoe as, well, Greenshoe, winner of more than $1 million and a strong favorite for the Kentucky Futurity Oct. 6 at The Red Mile in Lexington.

Fewer realize this colt began life under another name: Rifleman. The son of Father Patrick (out of Designed To Be) went through the Lexington Selected Yearling Sale under that name two years ago for $330,000, when sold to Courant, Inc., a Swedish entity led by Anders Strom. Greenshoe’s ownership now also includes Hans Backe, Lars Granqvist, and Morten Langli.

Strom’s way is to name each generation of horses according to an alphabet letter, and this was the season for the letter “G” in Strom’s world. Thus Rifleman became Greenshoe, a financial term (Greenshoe Option) popular in IPO jargon. His stablemates Green Manalishi S (as sung by Judas Priest – “Cause you’re the Green Manalishi with the two-pronged crown”) and Gimpanzee will join him in the Futurity, as they did recently in the Hambletonian.

If ever a sure thing looms, it appears to be trainer Marcus Melander’s prospects in the Futurity. “I think he can go in 1:48,” Melander said after winning the Bluegrass. “He’s so fast he can do that for sure.” 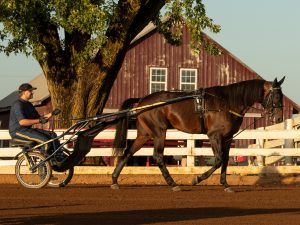 Greenshoe is a hot item right now, with 20 percent of breeding rights sold to Hanover Shoe Farm for $2.8 million. On Sunday he won his division of the $192,200 International Moni Bluegrass Stakes at The Red Mile in 1:49.4, coasting. Green Manilishi S won the other division as the 4-5 favorite. Winning both divisions partially made up for Greenshoe’s recent loss for Melander in the Hambletonian.

The Hambletonian was a hard loss to take, when Greenshoe got a little anxious and placed only second.

Gimpanzee was third in that race and Green Manalishi fifth. It was not the day Melander had hoped for, though he is not disappointed in his trio of colts.

“I was happy with my horses (in the Hambo). It was the first time they raced twice,” Melander said in Lexington, where the colts have been training. As for Greenshoe, “He got tired because he was a little bit anxious and a little bit stressed because there were a lot of people and people before the races that wanted to take a look at him. Of course, he felt something was going on. He got a little anxious and that took a lot of power out of him.”

Greenshoe also got distracted and anxious behind the gate in the final, with the consequence being he lost his race. Melander said he learned from that incident.

“A lot of people including me thought he was just going to go out and win but it’s horse racing,” Melander said. “It’s a tough race to win. Everything needs to be 100 percent. If it’s just 98 percent and if another horse has everything perfect all the way…”

As for the others in this power trio, Gimpanzee, winner last year of a Breeders Crown race, finished strongly to wind up third in the Hambo after sitting last coming into the stretch. Green Manalishi had a tough trip before his fifth-place finish. 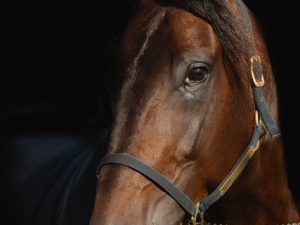 Greenshoe, winner of a Kentucky Sire Stakes and the likely favorite for the Kentucky Futurity – Photo by Maryjean Wall

Expect to see Greenshoe close to the lead in the Futurity. Brian Sears, his regular driver, “has been doing great letting him follow a helmet then unleashing him when they come to the half,” Melander said. The trainer has observed that Greenshoe likes to chase down horses but he showed a different style recently in Lexington in a Kentucky Sire Stakes, coming quickly to the lead and winning easily under wraps.

However, in a change of racing style, Green Manalishi scored a big win recently in the Canadian Trotting Classic while racing from the lead. Still, the stable believes he’s more effective coming from off the pace, where he can grind down the rest of the field.

As for Gimpanzee, winner of the Yonkers Trot in record time, “He can be anywhere,” Melander said, “but he’s been racing a lot in New York on those half-mile tracks, where it’s an advantage to go to the lead.”

Melander, who turned 27 in July, is having a breakout year this season, only his fourth as head of his own stable.

“We’ve got really nice horses,” he agreed. “But we’ve built it up. When we started in 2015 we had 10 horses, and we had to buy a lot of them ourselves. Then we got some owners and got more every year. Everything’s perfect right now.”

He’s in a good place, after leaving school at age 15 to work at racetracks in Sweden. As a child, he frequently participated in pony races in Sweden. At the track, Melander began by working five years for his uncle, Stephan Melander, who has won the Hambletonian.

Then, the young Melander immigrated to the United States to work one year for Jimmy Takter before starting his own stable. Melander has had horses in the Kentucky Futurity the past two years, but has yet to make the final heat. In fact last year’s entry, Evaluate, was an underdog.

There’ll be no underdog status for his trio of top colts heading for the gate this year. They are all outstanding horses, and Greenshoe, according to Melander, is a very fast horse who is “one of the better ones that ever entered a race track.” For this young trainer, not long on the scene, everything is looking up.