Silk Colors and Patterns for the Kentucky Oaks

Following are the silks for the owners of the contenders for the probable field for the May 4 Kentucky Oaks (GI) at Churchill Downs (in post position order, with riders and morning line odds): 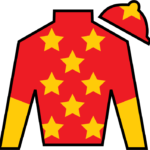