Eleven are expected to head postward in Saturday’s second running of the Jeff Ruby Steaks (GIII) at Turfway Park, the Kentucky Derby (GI) prep race known previously as the Spiral Stakes, Jim Beam Stakes, Lane’s End Stakes and, once, the galleryfurniture.com Stakes. The nine-furlong event, first contested in 1972, returns this year with a $200,000 pot and awards the top four finishers points to make the gate for the Kentucky Derby on a 20-10-5-1 scale.

Jeff Ruby’s Steakhouse, located in Ohio, Kentucky and Tennessee, has been a big supporter of horse racing for years now and fans can frequently see the eatery’s logo on the pants of many jockeys, including the recently retired Hall of Famer Gary Stevens, as well as Mike Smith, Joe Talamo and Drayden Van Dyke. 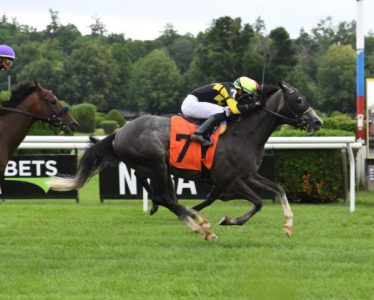 This Derby prep is probably best known because of Animal Kingdom, who captured the nine-furlong synthetic test as springboard to wearing the roses in 2011. But that’s not to say some good horses haven’t won the race as part of their tremendous careers. Hard Spun, who placed in all three Triple Crown races, won this race in 2007 and added his name to a list that includes dual classic winners Hansel and Prairie Bayou and Derby winner Lil E Tee. The Hall of Fame filly Serena’s Song was victorious in 1995, as well. Blended Citizen upset the field a year ago and then won the Peter Pan Stakes (GII) after skipping the Derby, but has only had three starts since, including a second-to-last (ninth) place finish in the Belmont Stakes (GI).

Hansel still owns the stakes record (at the current distance) of 1:46 3/5, though the race has been contested at a mile and 1 1/16 miles in the past.

William E. Adams saddled seven consecutive winners from 1977 through 1980, including the winners of both divisions in 1977 (Smiley’s Dream and Bob’s Dusty), 1978 (Five Star General and Raymond Earl) and 1980 (Major Run and Spruce Needles). He also saddled Lot o’Gold to win in 1979.

Saturday’s weather in Northern Kentucky is expected to warmer, but still a little dicey, with rain and thundershowers likely and a high reaching into the low 50s. Since the main track is made of Polytrack, the only effect the weather will have will likely be on the patrons.

The Battaglia Memorial runner-up is back in an attempt to give trainer Ronald Kahles a win with his first starter in this race. Jockey Euclyn Prentice is another looking for an initial win in this event, as well as a first stakes win as a jockey. This colt is one of the top progeny for his sire, who was an undefeated graded stakes winner.

This Calumet Farm-owned son of Malibu Moon hasn’t done much in five starts since breaking his maiden at Churchill in September and ships to the all-weather (and his fifth new track) after beating just one in the Sam F. Davis at Tampa Bay Downs last out. Dale Romans is the all-time leading trainer at Churchill and has won his fair share at Turfway, but has yet to win this stakes. Jockey John McKee is also winless in this race.

was also disappointing in the Sam F. Davis, though he did have some trouble and now ships here looking for Derby points for last year’s Triple Crown-winning owners WinStar Farm and China Horse Club, plus SF Racing. Arnaud Delacour saddles his first starter here, and jockey Declan Cannon rides this horse and in this race for the first time.

Another from the Romans Stable, this Illinois-bred West Point Thoroughbreds runner is looking to improve off a third in the Battaglia, where he raced very wide and closed well in the lane. Added distance will help this gelded son of Temple City. Jockey Luan Machado, who has yet to win a stakes in a 245-race career, makes a Jeff Ruby Steaks debut.

This gelded son of Artie Schiller ships in from Woodbine for his first start of the year. Owner/trainer Paul McEntee sends out his first starter in this stakes and jockey Alexis Achard has yet to win a single race in his 48-race North American career.

This son of dual classic winner Afleet Alex won a sloppy, off-the-turf allowance by six lengths from off the pace three weeks ago at Gulfstream Park, earning him a try here for Mark Casse and owners Gary Barber and Lucio Tucci. Gary Boulanger, who has won more than 3,500 races in his career — but never this one — will be aboard.

In looking for his first victory in this race, trainer Ian Wilkes sends out this $80,000 son of Tapizar off a fourth-place finish in the Sam Davis. He does get the services of hot local jockey Malcom Franklin in his quest for a first Jeff Ruby Steaks win himself.

ships in from New York and will make his stakes debut under jockey Sheldon Russell, also in his first attempt at a win here. The former claimer, who is trained by Raymond Handel, is the second most successful progeny of his sire, Istan, and was a $30,000 Keeneland yearling.

This $200,000 son of Curlin, who is trained by Kenny McPeek, is probably the star power in this race, though he ran for a $50,000 tag to break his maiden two back. Jockey Brian Hernandez Jr., who was aboard Oscar Nominated for the win in 2016, will be aboard.

This son of 2008 Kentucky Derby winner Big Brown is trained by Mike Maker, who has won this race four times (2006, With a City; 2010, Dean’s Kitten; 2016, Oscar Nominated; and 2017, Fast and Accurate). He is the off-the-pace Battaglia winner back for some points this time and will be ridden by Tyler Gaffalione, who was aboard Fast and Accurate for the win two years ago.

Hall of Fame trainer D. Wayne Lukas won this race in 1983 with Marfa and in 1995 with Serena’s Song. This year, he sends out this maiden by Flatter in his stakes debut for owner Calumet Farm. Jockey Walter De La Cruz rides.