It is a number that has a lot of meaning. Blackjack dealers must stand when they are dealt 17 (except for some casinos that hit on a soft 17). MIT researchers found that it is the most common randomly selected number between one and 20. It is a prime number and is the sum of the first four prime numbers (2,3,5, and 7). In numerology, 17 is a sign of strength and a good sense of judgment.

It is also the only post position in the Kentucky Derby that has never produced a winner. 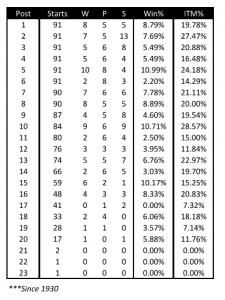 Looking at a chart of wins by post position for all the Kentucky Derby races that have run from a starting gate from 1930 to present, we see that not only has post 17 not won a race in 41 tries, but it is also tied for the lowest percentage of starters finishing in the money (7.69%) with post 19. 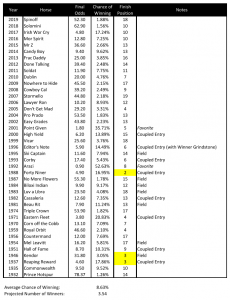 Based on the odds of the 41 previous horses that started out of post 17, the expected result is at least three winners. The only two heavy favorites on the list, Arazi in 1992 and Point Given in 2001, finished out of the money.

If you discount the inflated odds of horses that were in the “field” or not the primary selection of a coupled entry, you’d be left with 30 horses that should result in at least two winners. (Prior to 2001, betting interests numbered 14 and higher were coupled together as a single betting interest called the “field”).

Since 1999, the field size of the Derby has averaged 19 horses. With this many horses breaking at once, you’re bound to have some troubled trips. In the 2017 Kentucky Derby, 12 of the 20 entrants showed some sort of trouble in their final running lines. On average, in the larger Derby fields, about half of the entrants will encounter some sort of trouble during the race.

Perhaps the horses breaking from the first stall of the old auxiliary gate (post 15) got some relief since there is a gap to the last stall of the normal gate? Starting with last year’s Derby, though, that advantage goes away with the new gate. Will this have a major impact?

Post 17 has only boasted two favorites out of 41 starters and only six horses that went off under 5-1 (excluding field bets and the non-favored part of a coupled entry). With stats like that and most of the best 3-year-olds running, it is hard, yet not impossible, for a 50-1 horse to find the winner’s circle. If you exclude the high odds horses, post 17 should have had at least one winner.

In a game where angles, trends, figures, and track biases are created on a lot of data, the modern Kentucky Derby is a small subset of data. The outer posts are even smaller sets of data. Over time you would expect the data to normalize, but with this few data points, you are subject to more anomalies.

Will 2021 finally be the year that a “highly motivated” horse starting from post 17 finally scores a win or will the “curse of post 17” endure longer than the “curse of Apollo?”

You can bet that trainer Chad Brown, who sends out Highly Motivated from the No. 17 post on Saturday, is hoping to end that curse and earn his first Kentucky Derby 2021 victory.