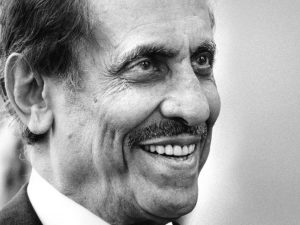 An endless string of champions carried his distinctive stable colors — green silks, white sleeves, pink sash and cap — to victory on the world’s most famous racecourses. He bred and owned the undefeated Frankel, considered one of the greatest thoroughbreds ever, and the mare Enable, another all-time great. He was a quiet man whose horses inspired some of the loudest cheers ever heard on a racetrack.

For the past four decades, Prince Khalid bin Abdullah of Saudi Arabia was among the sport’s most influential figures, and Tuesday’s announcement of his death by Juddmonte Farms at 83 elicited a stream of tributes.

“He was definitely one of the titans of racing — a true sportsman,” said Bob Baffert, who bought and trained Arrogate for him. The colt was one of Abdullah’s top 10 runners, sweeping the Travers, Breeders’ Cup Classic, Pegasus World Cup and Dubai World Cup.

“He was a gentleman, a low-key kind of guy,’’ added Baffert. “When I got word years ago that Prince Khalid wanted me to buy horses for him, it was probably the biggest compliment a trainer in America can get.”

Abdullah, an international businessman, earned four Eclipse Awards as leading owner (1992, 2002, 2016, 2017) and five for breeder (1995, 2001, 2002, 2003, 2009). The founder of Juddmonte Farms won his only American classic in the 2003 Belmont Stakes with Empire Maker. He was trained by Bobby Frankel, for whom the Prince’s greatest horse was named. In 2010, the spring after the Hall of Famer died, his namesake began a 14-for-14 roll for trainer Henry Cecil that exhausted all superlatives. His 2,000 Guineas runaway was called “one of the greatest displays on a British racecourse.”

After Frankel’s next-to-last race, the 2012 Juddmonte International in York, England, Abdullah said, “He is going to stud next year. Let us hope another horse like him will come in the future.” Incredibly, one did. Enable established herself as one of the top females ever, going 15-for-19 for John Gosden, including two of Juddmonte’s record-tying six victories in the Prix de l’Arc de Triomphe.

Among Juddmonte’s many other superstars was 1986 Arc hero Dancing Brave, and its horses won seven Eclipses as divisional champions. The Prince’s trophy collection could fill an aircraft hangar — more than 500 stakes in England, France, Ireland, United States, Canada, Hong Kong and Dubai.

“The contributions of Prince Khalid bin Abdullah to the thoroughbred racing and breeding industry will be felt for generations to come,” said Alex Waldrop, president and CEO of the National Thoroughbred Racing Association. “From Empire Maker to Frankel to Enable, his operation produced some of the sport’s all-time greats.”

Irish trainer Dermot Weld, like Abdullah, has won big races all over the world, including the Belmont, Irish Derby, Melbourne Cup and Breeders’ Cup Turf.

“Personally, even though he was a quiet man, he had the sort of charm that made you want to do well for him,” Fabre said. “I was lucky enough to train a lot of great horses for him. Above all, he was a man that everyone respected and loved.

“It’s a great loss for everyone.”