Jason Servis: From Lowest of Profiles to Maximum Notoriety 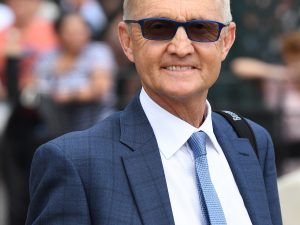 A year ago, Jason Servis couldn’t have been doing better. He had just seen Maximum Security dominate the Florida Derby and become a hot item for the Kentucky Derby. A week later, Servis took the Carter Handicap, one of American racing’s most prestigious sprints, with another horse.

After the Carter, Servis and I chatted briefly in Aqueduct’s winner’s circle. That week I had interviewed his younger brother, John Servis, trainer of 2004 Derby-Preakness champion Smarty Jones. He spoke of growing up in West Virginia with Jason in a racetrack family headed by their father, Joe, a jockey and then a steward.

It had the makings of a feel-good feature, and I asked Jason for his cell so we could talk more. He wasn’t interested, saying he’d rather avoid publicity because of “all the stuff that’s been out there.” I knew he was alluding to recurring allegations on social media that he was giving his horses more than hay, oats and water.

It still struck me as odd that at age 61, with his first serious Derby horse, that Servis wanted to stay under the radar. But I told him I understood.

By a twisted coincidence, that Carter winner’s name is World of Trouble. That’s where Servis found himself Monday, when he and fellow high-percentage trainer Jorge Navarro were among 27 charged with allegedly administering performance-enhancing drugs (PEDs) to racehorses. The federal indictments were unsealed in the Southern District Court of New York in Manhattan.

Among the horses named was 2019 3-year-old champion Maximum Security, the disqualified first-place finisher in the Kentucky Derby and recent winner of the richest race in history, the $20 million Saudi Cup.

Another was World of Trouble.

On Monday, FBI investigators searched the barns of Servis and Navarro in South Florida. Servis’ winter base is Palm Meadows, Navarro’s at Gulfstream Park West.

The racetrack is a petri dish of rumors, and for many years there were whispers about Servis and Navarro. They came under suspicion for their uncanny ability to improve horses dramatically, often in their first start for them. The pattern: A horse with unimpressive form is bet heavily and wins easily. Many of these former claimers became stakes winners.

In a 2009 column for the Washington Post, handicapping guru Andrew Beyer sarcastically put Servis on a list of six “miracle workers.” Beyer wrote that such “super trainers … acquire horses and transform them in ways that history’s greatest trainers never dreamed of.”

Monday’s indictments came as no shock to serious handicappers. As Beyer wrote 11 years ago: “In an era when certain trainers repeatedly perform feats that defy the laws of nature and the logic of handicapping, bettors invariably suspect they are using illegal substances.”

Those bettors now are saying, “I knew it all along.”

The charges result “from a widespread, corrupt scheme by racehorse trainers, veterinarians, PED distributors and others to manufacture, distribute and receive adulterated and misbranded PEDs to racehorses under scheme participants’ control.”

Nothing has been proven, but it couldn’t look much worse. Navarro is portrayed as the mastermind — the alleged scheme is called “The Navarro Doping Program” – but Servis comes off as a villain, too.

The 44-page indictment cites an intercepted call from June 2019 in which Dr. Kristian Rhein, a veterinarian, reassures Servis that Maximum Security would not test positive for a PED, saying, “There’s no test for it in America.”

Servis is accused of orchestrating “a widespread scheme of covertly obtaining and administering adulterated and misbranded PEDs, including a (version of a) PED called SGF-1000, to virtually all of the racehorses under his control.” Servis’ assistant trainer Henry Argueta is named with Navarro on a charge of drug alteration and misbranding of SGF-1000. The accusations go on and on.

On July 8, 2018, Twitter Nation was sniping away at Servis during an unstoppable roll of nine wins in his previous 11 starts. Two days before, his 3-year-old colt Firenze Fire circled the field and crushed the Dwyer Stakes by nine lengths, which was only part of the story.

When the gates opened, Firenze Fire’s odds were 5-1, about right for a horse who had lost four straight since January. Halfway down the backstretch, his price was cut in half to 5-2, thanks to a reported $124,109 in large individual bets made seconds before wagering closed. Nothing illegal there, but the highly irregular betting pattern raised eyebrows.

In an interview with horseracingnation.com’s Jonathan Lintner, Servis called the cyber chatter that he was cheating “embarrassing … I’m just on an unbelievable run right now. I’ve got my kids telling me they’re saying stuff on Twitter. People are talking a lot of crap.”

That was nothing compared to what they’re saying now.