About a year ago, I began experimenting with the concept of time decay as it relates to athletic performance. In fact, I wrote about my findings in an article entitled “A Speed Handicapping Method That Actually Works!”

In that article, I noted that speed figures — doesn’t matter the type (the old Daily Racing Form ratings, Beyer numbers, the “Figs”, etc.) — all suffer from the fact that they are merely a snapshot in time and, as such, may not be relevant today.

Hence, I came up with what I called a time-adjusted speed rating (or TASR for short). As I demonstrated in the article, at a certain threshold, these ratings produced much better results than other speed figures I’ve tested over the years.

So, today, I wanted to highlight some horses with superior TASRs running on Saturday. Of course, the risk of doing this is that the highlighted horses will perform abysmally and statistically-challenged handicappers will assume the whole concept of time-adjusted numbers is a waste of, well, time.

Even worse, the listed horses might perform ridiculously well and statistically-challenged handicappers will thus assume that the concept of time-adjusted numbers is the key to the mint.

It is neither. And I urge players to use their own judgement before betting on the following speed steeds: 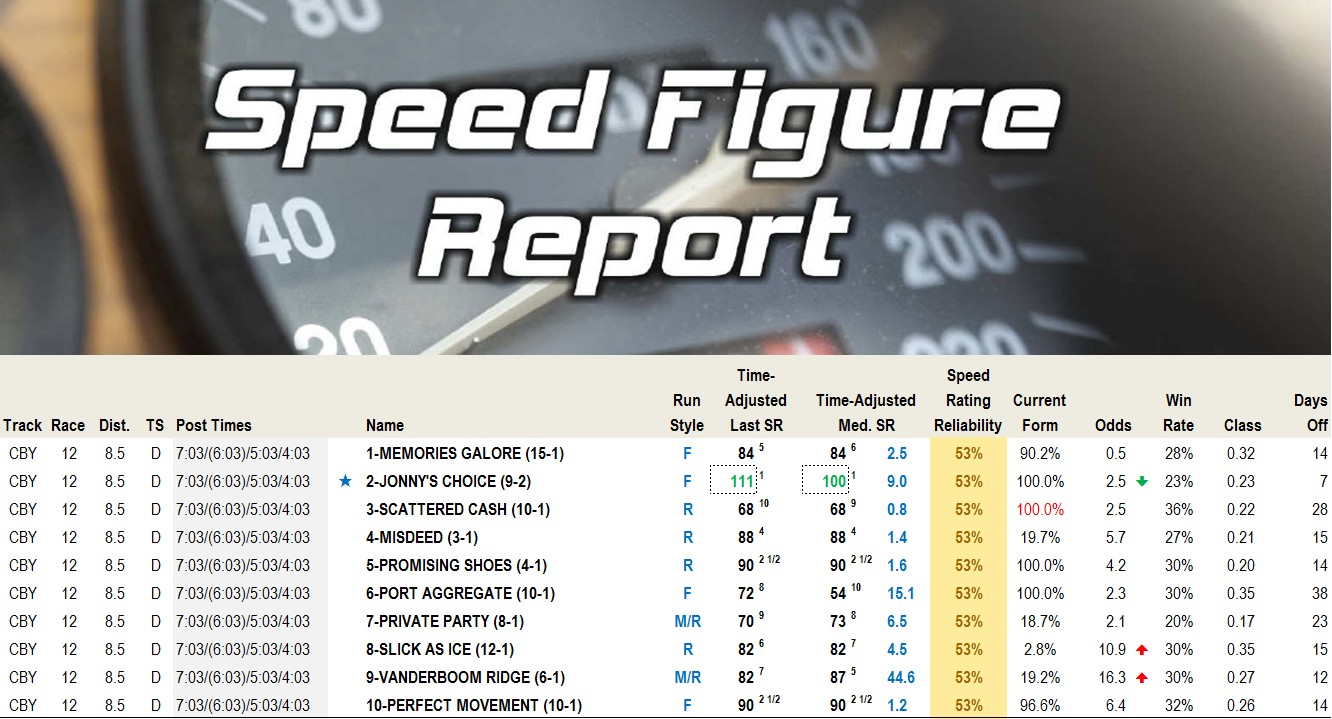 Comments: Both MR JANIMAL and BLAZE’N PROSPECTOR look good in this sport and I would use them as keys in all your exotic wagers.

Comments: Not only does COOL BREWSKI have a recent speed edge, he looks to have a pace edge as well. I’d use him on top of exactas — or “exactors” for my Canadian friends — with ROYAL NICK, D’ POP and TOBILLS.

Comments: DAVE’S TEXAS LADY is 3-of-7 lifetime on the grass and comes off an impressive win against lesser at Mountaineer Park.

Comments: PUT A HEX ON MY EX looks like a solid key on top and bottom of exactas with the 1/1A entry, along with RED SLIPPERS and CLASSICAL MUSIC.

Comments: In a race with a lot of hard-hitting campaigners, SASSY ROSE looks like the hardest hitting of them all — but make sure you get a decent price.

Comments: In a race without a lot of early zip, SO NOTED will need to work out a good trip, but the gelding came out running in his 6-year-old debut, which represented only the 15th start of his career.

Comments: OUR GABRIELLE heads a strong entry. With a vulnerable favorite in the next race, I’d key the daughter of Philanthropist in the double, among other wagers.