What the Conditions of Harness Races Really Mean 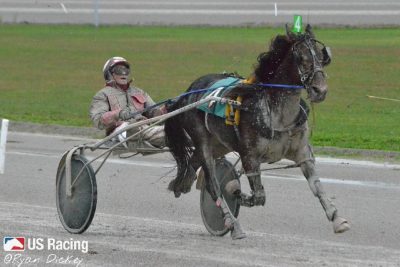 One of the toughest jobs in harness racing belongs to the racing secretary. It is their job to write the conditions for each race. To do this, they have to know a lot about the horses that are on the grounds. They have to know how many horses they have, how successful they’ve been, how healthy they are and, of course, how much dough they have earned.

When you look at a harness racing program, some of the race conditions look like they were written in code. Here is an example from a recent race at Monticello Raceway:

This race was written for horses struggling to make money. This particular race is for non-winners of $450 in their last five races or in any start in 2018. The other conditions allow for non-winners of 9 pari-mutuel races in the horse’s lifetime.

The purse for this particular race is $5,600 and, in harness racing, the top five get a check: 50 percent for win, 25 percent for place and 12 percent for show. The fourth and fifth place horses get 8 percent and 5 percent, respectively. So, in this race, the top three finishing horses would earn $2,800, $1,400 and $672, respectively — meaning that, in their next race, they’d have to move up in class. The fourth- and fifth-place horses could compete in this race again should the secretary write one similar in nature.

The savvy bettor takes note. He tracks the top three that will move up in class for their next race. He may decide that the next class will be too difficult to bet them again or he may decide to use these horses when the “go up” in their race next week.

The fourth- and fifth-place horses will be watched as well. In their next race, they might be favorites or higher choices in similar races.

Each track has a regular stable of horses. In harness racing, only the really good ones ship in and out. At Monticello, track announcer Howard Oil will let you know if a horse is going up or coming down in class. This is why tracks like Monticello have decent handles. Bettors are savvy; they study the trends and usually don’t stray track to track like many thoroughbred bettors do.

Another race on the Monticello card was easier to understand — a claiming race for fillies and mares and was written as such:

This is pretty simple. These are fillies and mares pacing a mile for a total purse of $3,300. All seven horses are up for sale, hence the term “claiming”. They can be claimed prior to the race for $4,000.

Because they are claimed before they run, the claim is final — meaning if the horse gets injured in the race, the sale still goes through. The horse then switches barns and lives to race another day under new ownership and, more often than not, a new trainer.

It’s always kind of sad to see a horse win a race, go to the winner’s circle and then switch barns afterwards, but that’s what keeps the sport going. Claiming can be good for the game. One owner may see something in a pacer or trotter that the current owner/trainer combo does not. It’s no different than, say, professional baseball. The Mets may release a player that the Cubs like, so the Cubs will claim him, thinking they can improve him. If you follow the NFL, Al Davis and the Oakland Raiders won three Super Bowls from 1976-1983. One of the secrets to their success was the team’s ability to claim players off waivers and make them contributors.

Tracks like Monticello are the home to conditional and claiming races. There are no track-sponsored stakes races, which require owners to nominate their horse well before the actual race takes place. For example, the Hambletonian is the premier event for 3-year old trotters. There is risk-reward at play here. When the horse is two years old, there is a nomination deadline with a nominal fee. It might cost $600 to $1,000 to nominate a horse for the Hambletonian. It works the same way for the Kentucky Derby, where the initial nomination is $600.

For most, it’s wasted money; with only 10 spots in the Hambo final, your horse better be really special just to make it. But if you don’t nominate and your horse becomes a star in its 3-year old season, a decision has to be made whether to supplement. Supplementing a horse can cost anywhere from $50,000 to $100,000 depending on the particular race. In this year’s Meadowlands Pace, two horses did, in fact, pay the supplemental fee of $61,690 to get in the field and one of them — Courtly Choice — made it pay off by winning the contest and collecting the  $350,000 first-place money.

In addition to condition races, stakes races and claiming affairs are the open handicaps. These are my favorites because they are for the best horses on the grounds and each week, you can count on the usual cast of characters to show up.

Yonkers features open paces and trots each week for fillies and mares and colts and geldings. The current purse for these races is $44,000 and you can count on the familiar names each and every week. Usually, the posts are assigned and drawn. Here is an example:

Because this is a handicap race, the racing office is trying to level the playing field. Last week’s open winner is often assigned the 7 or 8 post the next week. Why? To make it harder for the horse to win again and to make it an appealing race for bettors. As we know, the goal of any race track is to generate handle. You’ll often see a horse win one week, get post 8 the next and be unable to overcome that and win again. The result for the next week might be a better post position.

There are also preferred handicaps in which the racing secretary will invite horses that he wants in the race. This can be based on a variety of factors and, at Yonkers, these preferred events are a slight step below the opens, but like the opens, post positons are assigned and drawn to make it competitive from a betting standpoint.

Last, but not least, are invitationals where the racing office will invite horses — often from all over the country — to run in a particular race. These races are usually announced ahead of time and like stakes races, may require a nomination fee. Not all invitationals require such a fee; that varies from track to track.

Each July, Saratoga Casino Hotel hosts the Joe Gerrity Memorial Pace. The racing office will invite 15 to 20 horses and if more than eight or nine accept, the final runners are determined by total earnings.

So, which type of race captures your fancy?  Each race offers something. Horses that run in the claimers and the non-winner conditional races are the true grinders of the sport.

So, there it is: A guide to Standardbred conditions. Now, if you figure out how to handicap them, please let me know!