What the Ancient Greeks Can Teach Us About Handicapping

How many times have you been on the fence about a horse? You sort of like that four-horse in the fifth race, but not enough to go too heavy on the race. Then you look up at the monitor and Track Handicapper Johnny makes him his top selection and you hear Rail Guy shouting from somewhere, “I love dat four horse. Did ya hear me, bro? Hey, ya got wax in your ears or somethin’?”

You probably wish you did have wax in your ears, and a clothespin for your nose when Rail Guy gets too close.

Let’s step back in history a bit, to sometime around the end of the eighth century BC, and discuss a character named Odysseus (a.k.a. Ulysses) from a Greek poem written by Homer. Odysseus was returning home from the Trojan War to the island of Ithaca. To do so, he had to pass by the Island of the Sirens, where there are monsters that lure sailors to their death by singing beautifully and pretending to be beautiful women. 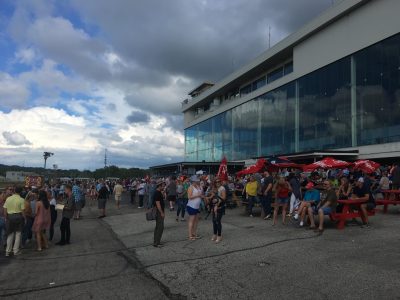 Taking the advice of the goddess Circe, Odysseus has his crew put beeswax in their ears, so they couldn’t hear the Sirens and be fooled into certain death. Odysseus, on the other hand, wanted to hear the songs, so he had his crew tie him to the mast of the ship. As he heard the songs, he saw beautiful, golden-haired women. His crew, which couldn’t hear the sirens, saw them for the monsters that they are.

I am not suggesting that you have someone tie you to a bench in the Monmouth Park grandstand and watch you struggle to get free to place a bet, but, rather, that you heed the advice Circe gave Odysseus and put some “wax” in your ears, so you are not tempted to change your strategy on the off comments of Track Handicapper Johnny, Rail Guy or that tip sheet that you found in the men’s room.

I am also not implying that you should forego good daily personal hygiene practices, like our good friend Rail Guy. Instead I am saying that you shouldn’t let anything you hear change your mind about the wagers you are planning to make.

Easier said than done. As we get back to that four-horse in the fifth race, we all know what happens next: You increase your bets on that race. You place a larger win wager or add an exacta or trifecta you hadn’t planned. After all, if both Rail Guy and Track Handicapper Johnny like him, you should feel better about playing this one, right?

You wagered more on a horse than you should have. You weren’t confident in this race when you got to the track, but your opinion improved based on other’s opinions.

This is another case of a track bias. Not the track bias you are used to — one favoring the rail or early speed — but confirmation bias. Confirmation bias is accepting or interpreting new information as a confirmation of one’s beliefs or, in this case, handicapping.

This can also work the other way by casting doubt on your solid selections.

If you came to the track today ready to unload your bankroll on a horse and see that Track Handicapper Johnny doesn’t even have him in his top three choices and Rail Guy has given you a half hour dissertation about why this horse couldn’t beat the mechanical horse outside of the Acme, you start doubting your selection. You were looking for confirmation of your handicapping but instead you are left wondering what you didn’t see in the other horses. In contrast to upping your wagers through confirmation, you drop the amount you are wagering or even eliminate some of your exotics.

I am not saying you should play the horses in a vacuum. However, you can skip watching the track analysts. You will never avoid Rail Guy when you are down by the paddock assessing the physicality of the horses, but you don’t need to engage with him. Hopefully he’ll find some other person that looks like they need a friend to talk to!

You need to trust your own handicapping ability and do your homework the night before. Go with what you know. You need to recognize and avoid the “Sirens” at the track that are influencing your betting. Perhaps they are holding you back from making a living playing the races.

Sometimes it pays to go to the track with wax in your ears and a clothespin in your pocket… just in case.