After six years contested under the Gold Cup at Santa Anita moniker, the Hollywood Gold Cup (G1) makes its triumphant return on the racing calendar as one of the country’s top races for older horses on Saturday at Santa Anita.

Though this year the purse has been dropped to just $300,000, the 10-furlong test loses none of its historical luster and returns to the name that made it famous.

Though the race is no longer a Breeders’ Cup Challenge “Win & You’re In” qualifier for the Classic in five months, a good bunch of horses chose to stick around California to contest it and not travel out of state to races which do offer a Breeders’ Cup guarantee and richer purses.

The Hollywood Gold Cup was first run in 1938 across town at the now defunct Hollywood Park. The legendary Seabiscuit emerged the winner of that first contest and since that summer day 82 years ago, the list of winners has become a “who’s who” of American racing: Noor, Citation, Two Lea, Swaps, Round Table, Gallant Man, Native Diver, Ack Ack, Ancient Title, Affirmed, Ferdinand, Blushing John, Best Pal, Cigar, Skip Away, Real Quiet, Lava Man and Game on Dude.

The last two editions were won by Accelerate and Vino Rosso, who would both go on to win the Breeders’ Cup Classic (G1) as their final career races.

The late Hall of Famer Charlie Whittingham tightened the girth on eight winners throughout his storied career to lead all trainers in victories, and Laffit Pincay Jr. booted home a whopping nine to be the race’s leading rider. In 1972, Quack set a world record of 1:58 1/5 when he won this race, and while Spectacular Bid lowered the mark to 1:57 4/5 in 1980, Quack still owns the honor as having set the fastest time in Hollywood Gold Cup history over a dirt surface.

This year six will race for the winner’s share of the pot, the highlight of the race being the first matchup between the West Coast’s top runners from the older division, Midcourt and Higher Power.

The C R K Racing-owned, John Shirreffs-trained Midcourt burst onto the scene last fall, stringing together four wins, including the Comma to the Top Stakes and Native Diver Stakes (G3). This year was off to a pretty good start with a win in the San Pasqual Stakes (G2), and a pair of thirds in the San Antonio Stakes (G2) and Santa Anita Handicap (G1) before the COVID-19 pandemic shut racing down, but the Midnight Lute gelding kept on training and logging good morning works, waiting for the first opportunity to run without shipping. He is blinkers off, which should help him settle in the early going under Victor Espinoza, and though winless at the distance, he likes Santa Anita.

Last year’s Pacific Classic (G1) winner Higher Power hasn’t raced since a last-place finish in the Pegasus World Cup (G1) as the favorite at Gulfstream Park in January after finishing 2019 with two third-place finishes in the Awesome Again (G1) and Breeders’ Cup Classic at Santa Anita. The 5-year-old Medaglia d’Oro colt, who is owned by Hronis Racing, has been training fairly consistently for John Sadler since and if he’s fit off the layoff, will be a tough competitor. Flavien Prat will be back aboard. 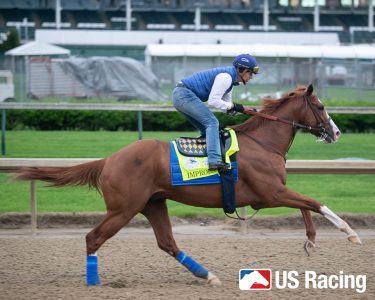 The somewhat temperamental Improbable returns off a second-place finish to Tom’s D’Etat in the Oaklawn Mile a month ago, which was his first start since his fifth in the Nov. 2 Breeders’ Cup Dirt Mile (G1). The flashy son of City Zip hasn’t won since taking the Los Alamitos Futurity (G1) in December of 2018, but he’s faced some of the toughest runners in his division and has never thrown a total clunker. He’s working well, including a seven-furlong move and a mile in prep for this event, and Drayden Van Dyke returns to ride.

Parsimony won the Curlin Stakes at Meydan and was expecting to make the Dubai World Cup, but shipped back to California in late March and has been training here since.