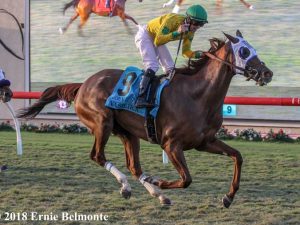 Hall of Fame trainer Jerry Hollendorfer returns to Del Mar on Saturday for the first time after a two-week banishment, and sends out 7-5 morning-line favorite Vasilika in the $200,000 Yellow Ribbon Handicap (G2).

The 5-year-old mare owned by All Schlaich Stables LLC, Hollendorfer, Gatto Racing LLC, and George Todaro is seeking her fifth consecutive graded-stakes win when she takes on eight rivals in the 1 1/16th-mile race over the turf course.

Not a bad way to return for a guy who was ruled off at Santa Anita Park in the wake of 30 horse deaths – four under Hollendorfer’s care – and was denied stalls by Del Mar since the meet opened on July 17. A judge recently issued an order allowing Hollendorfer to pursue his living.

Vasilika, a winner in 11 of 13 starts since being claimed for Hollendorfer and partners, will be ridden by Julien Leparoux as regular rider Flavien Prat chose to ride Bellafina in New York on the same day.

The daughter of Skipshot, who last out won the Gamely (G1) at Santa Anita on May 27, has two wins over this course from three starts and while she prefers more distance, this is well within her range. She’ll be short-priced but training well and her rivals need to bring their “A game” to beat her.

Beau Recall ships in for trainer Brad Cox off a second to standout Rushing Fall in the Just A Game Stakes (G1) at Belmont Park nearly two months ago. The Irish-bred daughter of Sir Prancealot is coming home in a way in that she previously was trained by local Simon Callaghan, but she has yet to win over this turf course in three tries. She has two wins and a third in five tries at this grassy distance and needs to improve off her eighth here a year ago. Drayden Van Dyke picks up the mount.

Ken Maddy Stakes (G3) winner Storm The Hill, who has been a bit of a downhill turf/mile specialist, seeks her first win in her fifth try at this distance. Trainer Phil D’Amato, who uncharacteristically only has one win so far this meet, sends this daughter of Get Stormy out for a second start this year and off a third last out in the one-mile Wilshire Handicap at Santa Anita. She will look to better her fifth in this race a year ago under jockey Rafael Bejarano from post position three.

Valedictorian ships in from the East Coast and a win in the Eatontown Stakes (G3) at this distance at Monmouth Park for trainer Kelly Breen. The well-traveled New Jersey-bred daughter of Temple City has had a good year, finishing worse than third only once in six starts and picking up a couple of graded wins. Jockey Carlos Hernandez also ships in for the race. 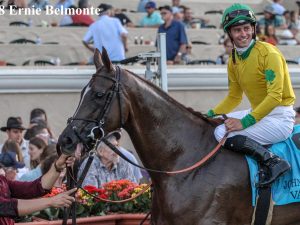 Hall of Famer Neil Drysdale will tighten the girth on multiple Grade 3 winner Toinette, making her 2019 debut. The well-bred daughter of Scat Daddy captured four of five starts last year, including the Edgewood Stakes (G3) at Keeneland and the Autumn Miss Stakes (G3) at Keeneland. She’s been training well and has been working regularly for several weeks now and her best shows she fits in this field.

Multiple graded-stakes winner Elysea’s World makes her fourth start for her new connections and while this race is by far too short for her preference, she has a win at the distance and has been training exceptionally well. Joe Talamo rides for trainer Richard Baltas and breaks from the outside post. Causeforcommotion, Lemoona, and Youngest Daughter round out the field.

The Yellow Ribbon is one of the rare races still run under handicap conditions left in North American racing. Once run as the Palomar Handicap, Del Mar adopted the name Yellow Ribbon from the Oak Tree Racing Association when they ceased operations at Santa Anita before 2012. The race at Santa Anita, named for the song “Tie a Yellow Ribbon ‘Round the Old Oak Tree,” is now known as the Rodeo Drive Stakes (G1) while the Del Mar edition’s history is now pulled from the Palomar Handicap archives.

Six juvenile fillies will race six furlongs in the $200,000 Sorrento (G2), which serves as the traditional prep for the Del Mar Debutante (GI) held over Labor Day weekend – a race that always reveals the West Coast’s brightest prospect for the Breeders’ Cup Juvenile Fillies (G1), which will be held at Santa Anita on Nov. 1.

This race was contested at 6 ½ furlongs for years from 1993 until 2017, but with the California racing calendar having changed so much due to the loss of Hollywood Park and the fact that Santa Anita offers limited juvenile races, Del Mar thought it best to offer this race at a cutback since it’s a good bet not many babies are ready for the challenge. Now back at three-quarters of a mile, the distance is a logical step to the Debutante’s seven furlongs.

This year Callaghan sends out a pair — Amalfi Sunrise and Shedaresthedevil –both off of impressive maiden victories, but they will both need to face off against Comical, fresh off of a graded win at Saratoga three weeks ago. 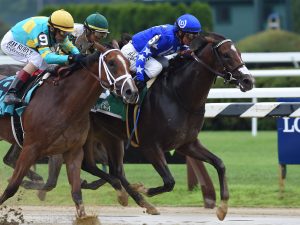 Comical, a $100,000 daughter of hot stallion Into Mischief, broke her maiden by an six lengths in her debut in late May. Trainer Doug O’Neill then shipped the bay filly to Saratoga where she captured the Schuylerville (G3) by a neck. She’s now back at O’Neill’s summer base, where she’ll take on a new bunch of fillies. Leparoux will be aboard for the first time and the pair will break from the inside.

Amalfi Sunrise was bought for $185,000 as a 2-year-old in training at the Ocala Breeders’ Sales three months ago and two months after she broke her maiden at Santa Anita by 6 ¼ lengths for Callaghan and jockey Norberto Arroyo Jr. The daughter of Constitution, like most of the runners here, faces winners for the first time, but a repeat of her debut sure looks strong enough to snatch the win.

Powerfulattraction is trained by Pete Eurton, who saddled champion Champagne Room to victory here two years ago. This $225,000 daughter of Commissioner broker her maiden from off the pace a month ago at Los Alamitos and has been training well all month in Del Mar. Talamo is back to ride.

Shedaresthedevil makes her first start for Callaghan after winning her debut by 3 ½ lengths for Norm Casse at Churchill in mid-June. She also picks up a new co-owner in Qatar Racing and makes her California debut against winners.

Shanghai Keeley ships in from her debut win at Pleasanton and she’s definitely getting the acid test here. The daughter of Shanghai Bobby is trained by Ari Herbertson, who has had multiple graded stakes-placed runners but has yet to win a graded stakes. This filly’s regular rider, Irving Orozco, will be in town for a rare Del Mar mount.

Princess Mo is the lone maiden in the field and finished third behind Amalfi Sunrise in her lone career race. She did finish 13 lengths behind the winner that day, but was running strongly late and may benefit from the extra furlong and a half. Geovanni Franco gets the call from trainer Ruben Gomez on the daughter of Uncle Mo.