Holiday Weekend Wrapup: All About Chad and Brad

It was the “Chad and Brad Show” over the Thanksgiving Weekend.

Four-time Eclipse Award-winning trainer Chad Brown sent the right horses out West to Del Mar for the holiday, and came away with four victories and a second in the five graded stakes turf races he entered.

Truly a remarkable feat by any measure, especially from an East Coast-based conditioner shipping cross-country.

And Brad Cox continued to shine in Kentucky with a strong showing at Churchill Downs as well as a Grade 1 victory at Del Mar.

Brown’s charges capped a four-day run of excellence at Del Mar on Sunday, closing day of the meet, with Viadera ($12.80) nosing out stablemate Blowout in the $300,000  for fillies and mares 3 and up going a mile – in a stakes record 1:33.03 (more than a second of the previous record). 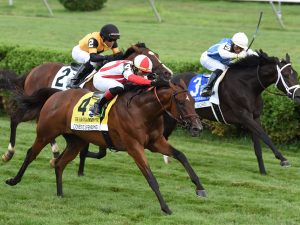 While Brown was back in New York, his assistant Jose Hernandez was charged with running the brief West Coast trip.

“This weekend has been amazing. I didn’t know which filly (of the stablemates) was the winner, but I’m happy it turned out to be Viadera,’’ he said after a four-horse blanket finish in the Matriarch. “My boss [Chad Brown] is an amazing trainer and I just do my best for him. It’s an amazing job for me and I love the horses. In the future, I don’t know when it would be, if Chad wanted to come out here with a string, I’d like that. We like it out here.”

Cox, meanwhile, is having a sensational 2020, topped by the championship comeback season of Monomoy Girl. He also trains Breeders’ Cup Juvenile (G1) winner Essential Quality, listed as the second individual choice on the Derby Future Wager at 8-1, behind 5-1 Life is Good. 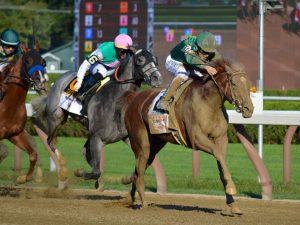 Arklow, owned by Jerry Crawford’s Donegal Racing partnership, ran sixth in the Breeders’ Cup Turf (G1) on Nov. 7, but was up to the task in edging Laccario by a half-length in the 1 1/2-mile race for 3-year-olds and up. Winning time was a stakes record 2:26.31.

“Joel gave him a great ride,” Crawford said of jockey Joel Rosario. “He tipped him out and got him in the clear rounding the turn like we hoped he would. In the Breeders’ Cup Turf, he got pinned against the rail and couldn’t get out until too late.”

With Brad Cox in Kentucky, his son Blake, was at Del Mar to handle dad’s contingent. Also, Juliet Foxtrot ran third in the Matriarch, behind Brown’s 1-2 finishers. In the Nov. 28 Kentucky Jockey Club (G2), his duo of Swill and Inspector Frost, ran fourth and ninth, respectively, with favorite Keepmeinmind winning the race for 2-year-olds. 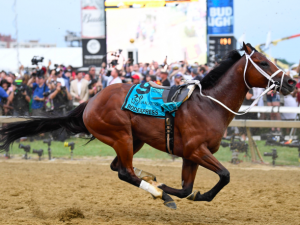 The big surprise over the weekend came in the 1 1/8-mile Clark, when Bodexpress ($25.40) – the riderless horse in the 2019 Preakness (G1) – stalked the pace and then took the lead with three-sixteenths to go for a one-length upset over favorite Code of Honor.

“Everything is good,” said assistant trainer Gustavo Delgado Jr. “Gulfstream Park is our home track. So, the likely next spot could be the Pegasus.”

In the 2019 Preakness, Bodexpress dumped jockey John Velazquez at the start and ran around the track with the rest of the field before outriders caught him and led him safely back to the stable area.

Keepmeinmind finally hit the winner’s circle in his fourth career start when he rallied from last to first in the stretch and edged Smiley Sobotka by three-quarters of length in the Derby-points qualifier. Trained by Robertino Diodoro, Keepmeinmind ($6) earned 10 Derby points for the win, which came 22 days after finishing third in the BC Juvenile.

“He showed his talent today,” said Diodoro. “He’s had some tough trips previously and even though he was a maiden, we knew he’d fit with this field. I think he’ll be a horse that’ll run all day.”

Keepmeinmind now has 18 Derby points, and will get a brief break before being shipped to Oaklawn Park for the winter and his 3-year-old campaign.

Following a 9 ½-length debut victory at Del Mar on Nov. 22, Life Is Good is the new 5-1 individual favorite after Pool 1 wagering was completed.

Essential Quality was the individual favorite going in, but is now second at 8-1. As usual, the “all other 3-year-old colts and geldings” is the overall 6-5 favorite.

The 5-year-old mare Almond Eye put an exclamation point on a brilliant career with a dazzling stretch run in a 1 ¼-length victory over Contrail for her second Japan Cup (G1) triumph.

It was the ninth Group 1 victory for one of Japan’s best horses, and she closes her career with a record of 11 wins, two seconds and a third in 15 starts with earnings of $17,608,586, according to Equibase.

Kiseki set the pace, and led by well over 20 lengths down the backstretch of the nearly 1 ½-mile race, and still had a large lead into the stretch. But under jockey Christophe Lemaire, Almond Eye had moved up to third entering the stretch and the mare came through with her signature finishing kick for the win.

“The victory is such a bonus, we couldn’t be happier. She has given us so much excitement and joy and it has been fulfilling to be a part of her career,’’ said trainer Sakae Kunieda. “It would be great if I could be involved in training her colt or filly someday.”

Added Lemaire: “Since this was her final start, it was very special for me and I’m thrilled we were able to win. The pace was just right for her and she responded well in the stretch. The others closing in on us didn’t worry me at all. Almond Eye is a perfect mare and doesn’t have any weak points.”

The Big A plays host to a big day Saturday, with four graded stakes races highlighted by the $250,000 Cigar Mile (G1).

Firenze Fire finished third in the Breeders’ Cup Sprint (G1) in his previous start for trainer Kelly Breen, while King Guillermo’s previous race was in a division of the Arkansas Derby (G1) in May, when he ran second to Nadal.