Haskell 2019: Every Cloud Has a Silver Lining

I was a mere four miles away from Monmouth Park coaching my kid’s rugby team earlier in the morning. It was already hot when we arrived at the Fair Haven Soccer Fields ready to get on the pitch at 9 a.m. Instead of playing our scheduled three matches, we played a total of two and the entire meet shut down by 10:30 a.m. due to the heat.

When we were leaving my dashboard read 98 degrees already and would hit 102 by the time I got home. I guess it is truly “cooler at the shore” as we say here in Jersey.

While my kids looked like drowned rats in the back seat, a mixture of sweat and water from the Fair Haven Fire Department wetting the kids down post-match, I was wondering how I’d ever get my seats to dry out and started thinking how Haskell Day was going to play out.

I haven’t been to Monmouth Park on Haskell Day in over a decade. I used to make an annual run down, stand in line, and pay my admission a couple of times so I could get a stack of hats and head on home. I know people that annually get in line hours before the gates open to make sure that they can “get their spot” in the picnic area. For some it is a great tradition before what is always a long, hot day of racing.

This year was different. I can’t remember a Haskell that was this hot. Sure, I’ve sweated in the sun until my bench seat or cooler finally drifted into the shade, but at 9 a.m. at a rugby match, it was already brutal in the shade. It wasn’t going to get any better.

There was no easy decision for the management at Monmouth Park to make. Haskell Day is their signature event. A race card filled with stakes races and the crown jewel of the Monmouth Park meet. I can see both sides of running and canceling. I don’t envy the decision and gamble track management had to make.

So who were the winners and losers from the Haskell this year? 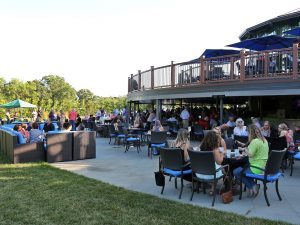 For my friends that sat in line starting at 8 a.m. to get the perfect table in the picnic area, this made a trip to the track into a 12-plus hour day for those that decided to stick it out.

With very little to do between the second race and the evening start of the stakes portion of the card, why hang around? I don’t think I could have made myself busy for the four plus hours in this kind of heat and wouldn’t have had enough water in my cooler to last that long. Since Monmouth has also restricted the size cooler you can bring and where you can have it, those in the grandstand would have been shelling out a good buck to eat another meal and stay hydrated. One more added expense to the average track-goer that has already paid a premium to park and get into the track. I would have gone home after the second race.

With the daytime cancellations of Belterra, Delaware, Ellis, Finger Lakes, Laurel, Parx, and Saratoga there weren’t a lot of options until Del Mar started running.

Exotics didn’t fare much better. Five of the $1 exactas returned less than $10, with four of those returning $6 or less.

There weren’t a lot of great wagering opportunities left after the card was abbreviated.

Haskell Day is a big expense. Extra security, extra tellers, extra everyone was on hand for a paltry turnout. Not to mention the flack that track management is taking for electing to run, which I emphasize was not an easy decision to make. With all the pressures of PETA and the issues related to the condition of the Santa Anita racing surface, the thought of a horse dying from a heat related issue weighed heavy on their minds. Thankfully there were no human or equine issues related to heat.

The posted attendance was 25,173. How many of those did what I used to do and turned the turnstile a couple of times to get extra Haskell hats? How many left before the card resumed at 6 p.m.?

CEO of Darby Development, the operator of Monmouth Park, Dennis Drazin thought that with no other betting options with all the cancellations that more attention would be turned to Monmouth Park, projecting that Monmouth could see a handle similar to 2015. Instead Drazin concedes that Haskell Day may cost “$4 to $5 million in revenues.”

The chart shows the last 10 Haskell Day figures. 2015 stands out for obvious reasons as everyone wanted to get a glimpse of history as Triple Crown winner American Pharaoh won for fun. In 2016, some stayed away from the track since it was a rainy day. Casual fans and guys like Rail Guy don’t mind getting a little wet when they know they can seek shelter inside if the rain picks up. Yet, there is no relief from the heat for the average fan at Monmouth.

After withstanding an inquiry in an exciting race, he has solidified himself in the 3-year-old division right now and earned his way into the Breeder’s Cup this fall. Not exactly redemption for this colt, Jason Servis, and the Wests, but he did avenge his loss to King for a Day in the Pegasus a few weeks ago.

I was most impressed by his ability to rate off the pace and not need to lead as he has shown previously. While I dismissed this colt in the Kentucky Derby, he is maturing nicely.

Even with everything working against making Haskell Day a financial success, the race have a quality field, albeit short, and did have a WPS pool total on par with other years.  Note that the WPS pool total for 2019 is not that far off the average if you remove the anomaly of American Pharoah in 2015. The Haskell was still a competitive race that drew attention from around the country, even when it ran later in the day.

So there is a silver lining to this debacle after all.

We’ll never know the answers to those questions and I am sure that Dennis Drazin and others will be thinking about the decisions made this weekend for a long time.