The Potomac Pace rarely if ever stands out on the harness racing calendar. Nonetheless, it remains one of my favorite races of the year.

The race is on a Sunday night. In the middle of November. And like many features on night cards, post time is close to 11 p.m. ET.

The $100,000 purse is solid, but there are bigger purses at other tracks. That said, the “Pace” usually draws an excellent field of eight veteran pacers. Those that follow harness racing know that after the Breeders Crown at the end of October, most of the star pacers and trotters are tucked away for the winter. While they rest up for the next year’s stake season (usually beginning in March), the racing attention shifts to the grinders and those that we refer to as the “winter warriors” (sans Pompano).

The Potomac Pace is a race for the grinders. Some were stars in their prime with some big wins on their resumes, but most were competitive enough to compete in races such as the Potomac. 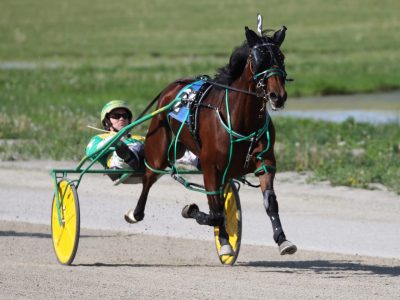 Pacers are not the preferred gait for those that really love and follow harness racing. While trotters tend to frustrate more by breaking stride, they are seen as the classic horses. After all, the most famous race in harness racing is the Hambletonian, which of course features 3-year old trotters and the only race that might get a small slice of media attention the next day.

Pacers are more durable, and some would say clumsier. They have a sidewinding style that’s not prim and proper like the trotters.  When you see a great trotter, it sort of reminds me of the violin, a great sounding instrument that must be handled with care. When you see pacers, you think of an electric guitar. It doesn’t sound as good as the violin, but it can be played often and played hard.

This year’s Potomac Pace featured very good horses. Rosecroft Raceway always seems to invite a good field for its signature race of the season and 2021 was no different. Included in the field was defending champion, Leonidas, who stormed from last to first in remarkable fashion in 2020. He was back, but after a nice spring, was struggling to find his winning form. The fact that he was back tells you all you need to know about veteran pacers.

The 5/8ths mile Rosecroft Raceway has the banked turns and in harness racing, banked turns can make for fast times. One would think that 1-mile tracks like the Meadowlands would feature the faster times, but the banks at places like Rosecroft and Northfield Park in Ohio can produce blazing times of their own.

That was certainly the case in this year’s Potomac Pace. The opening quarter was 26, the half in 53.2. After that, the pacers are just trying to hang on and hold form. In essence, the winner is often the one who decelerates the slowest.  And this year, Enavant was that horse. To be fair, he didn’t slow down that much with a back half of 54.3, but the fact that he pulled away indicated that the rest of the field was indeed gassed.

Track announcer Pete Medhurst always sounds great; before, during and after the race and his interview with winning driver Dan Dube shows just how simple and pure harness racing can be. He asked Dube several questions about strategy and the now two-time winning Potomac Pace winner, really had very little to say. Normally a closer, Enavant stayed near the front and by the half-mile mark took the lead in a game of catch me if you can.

“I just let him go and he decided to go,” said Dube. Medhurst, sensing that simplicity, let it go there, congratulating Dube and thanking him and trainer Luc Blais for coming down from Canada and entering the race.

The final time was a crisp 1:48.0. It wasn’t a track record, but that’s fast for a 5/8 mile track, and a tribute to how good these veteran pacers are. The only disappointing part was that only $70,032 was wagered. As a fan, I wish that the sport could market itself better, but that’s a story for another day.

Don’t get me wrong, if you love harness racing, there is nothing better than Hambletonian Day and if able, heading to the Delaware County Fair in late September for the Little Brown Jug will remain on my wish list. Those are spotlight races that get the sport the attention that it needs.

But for guys like me, give me eight veteran pacers on a Sunday night, racing for $100,000 in the middle of November at good old Rosecroft Raceway. It’s not a showcase event, but it really is the soul of the sport and I already have Sun. Nov. 13 on my calendar for Potomac Pace 7.