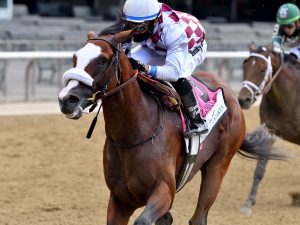 Jockeys and baseball managers share a common employment experience. Most are hired to eventually be fired.

That was the hard lesson Manny Franco learned this week when he was booted off Tiz the Law following a sixth-place finish last Saturday (Nov. 7) in the $6 million Breeders’ Cup Classic (G1). Hall of Famer John Velazquez will be aboard when the colt makes his next scheduled start in the Pegasus World Cup (G1) on Jan. 23 at Gulfstream Park.

Franco is just the latest victim of the “Blame Game.” When a horse doesn’t perform up to expectations, someone or something has to take the fall.

Racing is full of ready-made excuses. Blame the track, blame the weather, blame the post position. When all else fails, blame the rider.

Whether as owners or bettors, we have all been victimized by poor rides. Jockeys are athletes, and sometimes they make mistakes. Heck, even Tom Brady throws an interception now and then

That was not the case with Franco and Tiz the Law.

Franco was part of the feel-good story of Tiz the Law. A young rider getting his first shot on the biggest stage, Franco seized the moment to guide Tiz the Law to four Grade 1 victories – the Champagne in 2019, the Florida Derby, Belmont Stakes, and Travers in 2020.

Ah, but what have you done for us lately?

Upon hearing the news that Franco was fired, I called up a replay of the Classic. Frankly, I could find no fault with Franco.

Breaking from post 2, Franco got his horse way from the gate in very good order and briefly held the lead until Authentic swooped past.

Tiz the Law enjoyed a ground-saving trip while Authentic and Velazquez blazed away in a record-shattering performance.

What was Franco supposed to do? If he challenged the early front-runner, both Tiz the Law and Authentic would likely finish up the track.

Barclay Tagg, Tiz the Law’s trainer, was grumbling about the ride the morning after.

“Franco said he was rank on him,” Tagg recounted. “The winner was rank and he just should have followed him around. I had him ready to run, but I can’t ride for them.”

The only alternative option was keeping Tiz the Law wide, if that was even realistic from an inside post, for a  stalking trip on the outside. That was the spot Maximum Security had, and we saw how well that worked for him.

Franco eventually maneuvered Tiz the Law off the fence turning for home. It was clear by then nobody was reeling in Authentic on a strongly speed-biased racetrack. Tiz the Law didn’t eagerly pick up the chase, hanging like a cheap suit through the stretch run.

Here’s an alternative to the poor-ride rationale. Tiz the Law raced brilliantly from the summer of his 2-year-old season straight through the career-best victory in the Travers in early August.

He peaked in the Travers and was over-the-top by the time Classic rolled around. He was no match for Authentic as the 7-10 favorite in the Kentucky Derby, and was far less competitive in the Classic.

Tiz the Law is now regrouping in Florida with every reason for racing fans to believe they will see a revived and fresh horse in the new year.

Once Authentic was retired, Velazquez jumped into the suddenly-vacant saddle atop Tiz the Law. As for Franco, he is young enough (only 25) and talented enough to presumably get more opportunities on top horses.

So ends only the latest chapter of racing’s “Blame Game.” Why look in the mirror, when you can always find a patsy?