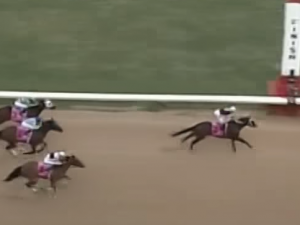 Champion Untapable is back and will kick off here five-year-old season with a start in the $350,000 Azeri Stakes (GII). She hasn’t raced since finishing second in last year’s Spinster Stakes (GI) at Keeneland and was attempting to repeat in the Breeders’ Cup Distaff (GI) before spiking a fever and being withdrawn from consideration. She received an extended vacation over the winter and has been training strongly over the Oaklawn surface since, with the short-term goal being defending her title in the April 15 Apple Blossom Handicap (GI).

The daughter of Tapit and the Grade II-winning Prized mare Fun House was bred in Kentucky by her owners, Winchell Thoroughbreds, and is trained by Steve Asmussen. She will carry jockey Florent Geroux from post position seven.

Call Pat and Streamline, the one-two finishers from last month’s Bayakoa Stakes, will put Untapable to the test, as will California shipper Kyriaki and grade 2 winners Sarah Sis and High Dollar Woman.