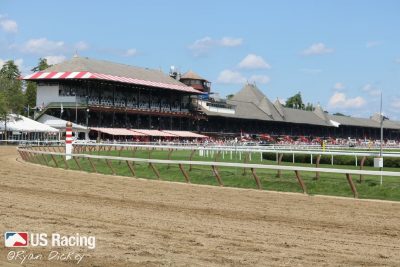 Alright, the summer meets of Saratoga and Monmouth Park have long since closed and we are in that post-Breeders’ Cup lull. What is an avid horseplayer to do?

Take a break from trying to make a living playing the races and watch a movie!

So, I polled some of my handicapping and track friends to see what horse racing movies they like and why. The names haven’t been changed since none of them are all that innocent:

Pete is one of my favorite guys to talk racing with, normally over a round of golf (he is much better than I am, by the way). While he can be described as the guy who wears the shirt that makes him stand out at the track, he is self-described “pick the horse named after the best 1970’s classic rock song” kind of guy.

At the age of seven, Pete saw this movie at the movie theater in the next town over from where we both currently live. He remembers being scared and hiding his eyes at the beginning scene where the ship that is carrying Black catches fire and sinks in a raging sea.

Even to this day, Pete describes the movie as beautifully filmed — from the deserted beach scenes to the training at the farm with Mickey Rooney. It was also the first time he ever saw a horse race and remembers the worry he had when Black’s leg gets cut before the race. But the racing scene on the big screen, coupled with the sounds of the hoofs galloping, will always stick out in his mind.

He is your typical hard-working, hard-playing guy. While sports are more this thing, he does dabble with horse racing from time to time — always looking for a nice longshot to help send him to early retirement.

Dave summed it up in one line for me: “It is the day we all dream of, winning every bet and winning big.” Who hasn’t dreamed of going to the track and having the Midas touch? Filmed primarily at Hialeah, the film features some great examples of the different types of horseplayers, as well as the other degenerates of society!

It is a light-hearted comedy with a ton of great quotes.

“Why can’t you watch the horses run around the track and not bet?”

“It’s not my gambling that bothers you, it’s my losing.”

“There’s a fine line between winning and losing.”
“Yeah. The finish line.”

“You could be walking around lucky, and not even know it.”

Jacob worked for me when I co-owned a handicapping website many years ago. He was instrumental in helping me figure out how to automate some of my figures using data files, macros and a lot of trial and error. We have bounced angles, ideas and theories off of each other for years.

This is the only horse racing movie Jacob owns. He claims to have watched it at least 100 times and can’t wait to watch it again? Why? Just like other sports movies like Rudy or Major League, we all like to pull for the underdog. As gamblers, aren’t we always looking for the longshot to come out on top?

I agree with Jacob wholeheartedly. As a movie quote lover, there are a lot of great lines in this movie:

“Every horse is good for something.”

“You know, you don’t throw a whole life away just ‘cause he’s banged up a little.”

“The horse is small, the jockey too big, the trainer too old — and I’m too dumb to know the difference.”

“You know, everybody thinks we found this broken-down horse and fixed him, but we didn’t. He fixed us. Every one of us. And I guess in a way we kinda fixed each other too.”

Walter and I have been track buddies for the better part of two decades. He was my wingman for many weeknights up at the Meadowlands, where we met most of the horseplaying stereotypes I have written about. While always a calculated horseplayer, Walter has been a part of many of my successful syndicated large pick-4, pick-5 and pick-6 wagers.

Walter feels the cinematography of this movie is unmatched by any other racing move he has seen. Naturally, his favorite scene is when Secretariat pulls away from Sham in the last half mile of the Belmont Stakes, blowing away the competition as he continues to accelerate across the finish line. It is amazing how the flip of a coin can determine one’s luck and fate. What if Ogden Phipps had taken Somethingroyal’s foal instead of Hasty Matelda’s foal?

“This is not about going back. This is about life being ahead of you and you run at it! Because you never know how far you can run unless you run.”

“I will not live the rest of my life in regret.”

“Hey, Kentucky! Big Old Red done ate his breakfast this morning! And you about to see something that you ain’t never even seen before!”

My wife makes the list as my favorite track buddy. While she is not the handicapper that I am, she is a much better bettor. She is more willing to take risks and has been responsible for some of our larger hits on exotic wagers over the course of our lives. I have only known her for a mere 30+ years at this point and know that when we go to the track she is almost guaranteed to cash more tickets than not!

Why did Cara pick a movie that was nominated for five Razzie Awards and lost in two categories to Tom Cruise in Cocktail (Worst Picture and Worst Screenplay)? It is because Hot to Trot is a mindless, funny movie and because John Candy and Bobcat Goldthwait can make anything funny!

While not a wealth of memorable quotes came out of this movie, those of us that were teens in the ‘80s will remember the promotional 1-800 number that featured John Candy (the voice of Don the Talking Horse) on the other end telling jokes.

So, what is YOUR favorite horse racing movie and why?