How I Became a Fan of Horse Racing

I have been following sports for nearly half a century. It all started when my stepfather had a part-time job as a Kansas City Royals and Chiefs usher, at the now-defunct Municipal Stadium in 1969. On occasion, he would bring me to the games and put me in an aisle seat in his section where he could watch me.

As a consequence, I got to see the expansion Kansas City Royals their first season and, later, the post-Super Bowl winning Kansas City Chiefs. Admittedly, as a young boy at Chiefs games, I was more impressed with the horse War Paint and his rider (who wore an Indian headdress) that trotted out on the field than the actual game.

Maybe that was my first clue that horseracing was in my blood.

Then, as the biographer of the Grand Prix/Sports Car driver Masten Gregory, I was equally blessed to interview and meet so many legends of the motorsports world: Carroll Shelby, Sir Stirling Moss, the first American World Champion Phil Hill, Bob Bondurant, Boris “Bob” Said, etc.

So, with such a varied sports background, you are probably wondering why and how I became so passionate about the sport of horse racing?

My maternal grandfather loved horse racing. I remember he would listen horse racing on the radio and sometimes have a TV on watching a baseball game at the same time. But what really did it for me was a subscription to Sports Illustrated in the 1970s that I received as a birthday present. This was partly due to one of my grade school teachers urging my mother that anything I would read as a young boy was a good thing and had educational value.

The 1970s just happened to be one of the best eras of horse racing — the Golden Era, in my opinion — with Secretariat, Seattle Slew and Affirmed all winning Triple Crowns. Horses and jockeys during this time made the SI front cover with great regularity. I feel that this was mostly due to Secretariat’s success. Secretariat still holds the track record for all three Triple Crown races. Secretariat raised the bar — his accomplishments pushed the sport of horse racing back into the limelight. Comparisons between Secretariat and the great Man o’ War began.

Unlike today, growing up in the 1970s, entertainment was extremely focused. You had three major network TV stations, two local stations and you depended on these and the daily newspaper for news. On weekends, you watched whatever was on ABC’s Wide World of Sports. I remember waking up in the morning excited to get the newspaper to read the sports page or coming home from school and grabbing the weekly Sports Illustrated issue out of the mailbox. 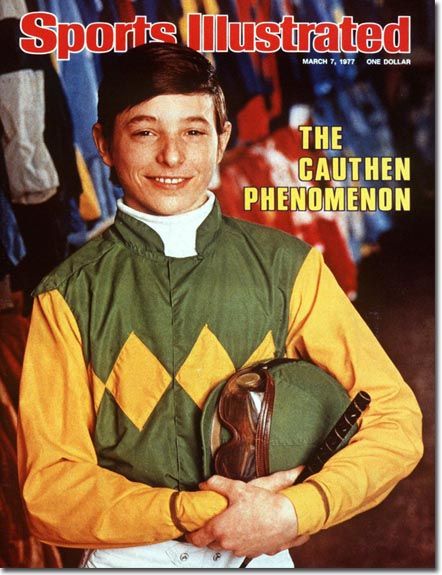 Ultimately, what probably sealed the deal for me and made me a horse racing fan was seeing a 16-year-old jockey named Steve Cauthen on the cover of Sports Illustrated in March 1977. This was something, as a teen myself, that I could identify and relate with. All the other athletes who made the front cover were “old,” but here was someone not much older than me on the front cover.

I thought Cauthen was cool.

In 1977, Cauthen was voted Associated Press Athlete of the Year as well as Sports Illustrated Sportsman of the Year. The following year, in 1978, Cauthen won the Triple Crown on Affirmed, thus becoming the youngest Triple Crown-winning jockey at the age of 18. I don’t think this record will ever be broken.

As a fan of horse racing, it was a long 37-year wait after Affirmed to see another Triple Crown winner — American Pharoah in 2015. I attended the 2015 Kentucky Derby and saw American Pharoah win the first leg of the Triple Crown, as well as the Breeders’ Cup Classic to become the first Grand Slam winner of North American thoroughbred racing.

What ranks as my favorite sports memory witnessed live?

American Pharoah’s win in the 2015 Breeders’ Cup Classic. My son and I were camped out on a bench right at the finish line at Keeneland and saw jockey Victor Espinoza point his whip right at us, as he crossed the wire victorious.

Justify’s Triple Crown win in this year’s Belmont Stakes (below) ranks a close second. Seeing a Triple Crown won in person, with as difficult as it has been to pull off, is hard to top. Especially with all the near-misses and disappointments I have witnessed over the years.

But the lure for any sport, that thing that really sucks us in and captures our imagination, is witnessing greatness — that one athlete, that one moment in time, that dazzles us.

For me, that athlete is one that I only got to watch on television — Secretariat and his performance in the Belmont Stakes on June 9, 1973 (below).

In my opinion, this still represents the greatest feat in sports history in my lifetime. The closest any colt has come to Secretariat’s time of 2:24 in the Belmont Stakes was Easy Goer in 1989 — and he finished in 2:26, a full two seconds slower than Big Red. To put this into perspective, this time would put Easy Goer about 10 to 12 ½ lengths behind Secretariat, or 80 to 100 feet behind.

Secretariat was sort of a freak of nature — like God wanted to show off a bit. Sadly, I don’t think there will ever be another horse like him. But there was a 53-year gap between the birth of Man o’ War and the birth of Secretariat. So, perhaps the next generational thoroughbred of a lifetime will be born in the next decade?

We can only hope.

Michael Cox
Michael is a pharmacist by profession, author of “Masten Gregory: Totally Fearless” as well as a horse racing blog that can be found at: www.thederbyhandicapper.com. He attributes his love for horse racing to two things: his grandfather who used to listen to horse races on the radio broadcasted from the now defunct Ak-Sar-Ben race track in Omaha, Nebraska and a Sports Illustrated subscription in the 1970s.
Share on Facebook Share
Share on TwitterTweet
Share on LinkedIn Share
Archives