If you grew up in New Jersey, as I did, during the summer you never said you were going to the beach.

You went “down the shore,” a Jersey-ism whose origin is unknown. For as far back as I can remember, my family rented a cheap bungalow for two weeks in July or August. We would pass signs for Monmouth Park approaching Exit 105 of the Garden State Parkway but never stopped.

My grandmother and her older brother, Uncle Pete, played the horses, but Nana never accompanied us on vacation. If she had, I’m sure I would have made my first visit to Monmouth as a little kid in the mid-50’s, but my parents didn’t gamble, so I didn’t get there until 1981. Which probably was just as well.

I didn’t become a horseplayer until the summer of ’81, when Major League Baseball went on strike. With my favorite sport shut down, I was bored, and a friend suggested we spend the day at Monmouth. We did, and beginner’s luck kicked in. It was July 7 — 7/7 — so on a numerological hunch I bet $7 across the board on a 15-1 maiden, who of course won easily. What an easy game. My theory: The racing gods saw me coming and set up an ambush to hook the rookie for life. It worked.

A few weeks later at Monmouth, I had one of those miserable days when nothing went right. I lost a bunch of photo finishes, got split in three or four exactas, and was DQ’d in the last race. Enraged and spewing curses, I hurled my Racing Form from the third floor of the grandstand. Shortly after it landed, on the way to the parking lot I bought the next day’s Form. And so it began.

Forty years later, I’ve endured dozens of days like that one, but I keep coming back for more. Morons never learn. I’ve cashed tickets at 115 other tracks all over the world, yet I still find Monmouth one of the toughest places to handicap, especially on Haskell day.

This brings us to Saturday, when the Triple Crown runner-ups — Mandaloun, Midnight Bourbon, and Hot Rod Charlie — will go for a Grade 1 trophy in the 54th running of Monmouth’s only race that matters.

Let’s see if we can make some money on The Shore’s Greatest Stretch and at “The August Place to Be” on Saratoga’s opening weekend. And if my advice is bad, don’t hurl your Form or Brisnet sheets at the television. There’s always tomorrow. 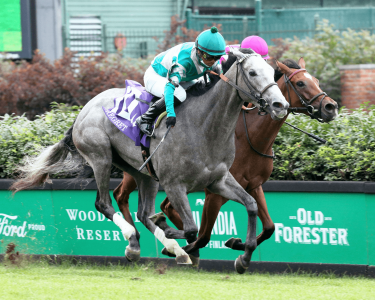 In a major surprise, the Louisiana Derby turned out to be a key race. Mandaloun (runner-up in the Derby), Midnight Bourbon (Preakness), and Hot Rod Charlie (Belmont) will meet again Saturday without having to worry about Medina Spirit, Rombauer, or Essential Quality.

I’ve never bet on him, but my gut feeling is that Louisiana Derby champion Hot Rod Charlie (the Haskell’s 6-5 morning-line favorite) is the best 3-year-old who didn’t win a classic. Midnight Bourbon (9-2) is a teaser, always looking like he’s on the verge of winning a big one and never delivering. Mandaloun (2-1 second choice) has been erratic, and even though he has a race over the track (a win in the Pegasus), I think Hot Rod Charlie will get the job done.

I don’t think being a first-time runner at Monmouth will hurt Hot Rod Charlie. It’s a pretty straightforward track that generally favors horses with speed, front end, or tactical, and Charlie fits that profile.

“Flavien (Prat) has been working Charlie almost every week and knows him very well,” part-owner Greg Helm said. “I think it’ll all depend on the break, and Flavien will act accordingly. Charlie has speed and he’s a very versatile horse.”

Prat has emerged as an elite rider in the past couple of years, and I expect to see him in the winner’s circle after Monmouth’s signature event.

Wit, a Todd Pletcher colt, made quite an impression in his debut, overcoming a slow start to cruise by six lengths over 5 1/2 furlongs. Not many 2-year-olds have the ability to rally like that, especially in their first time out, so I’ll go with him. I think he’ll stalk a quick pace set by Candy Landing and Trust Our Journey and pull away late.

Can Chad Brown train the Diana winner for the sixth straight year?

“We’ve had enormous success with it,” Brown said. “I’m lucky; we’ve had the right horses.”

I think Harvey’s Lil Goil, who’s 2-for-2 at the distance, will end Brown’s streak. She has tactical speed and a solid closing kick. She’ll also be a bigger price than she should be after finishing fifth last time over yielding ground in the 1 1/4-mile Grade 2 New York at Belmont Park.

The distance and the course condition were against her that day. “It was very soft ground,” trainer Bill Mott said, “and it could have worked against her a little bit.”

I’m betting that Harvey’s Lil Goil can give a fifth Diana trophy to Mott, one of the best grass trainers of all time.