Trying to pick winners is tricky enough, and when making selections before race day, a major unpredictable factor comes into play: the weather. Not even checking the forecast protects you from being ambushed.

This endlessly moving part caused complications last Saturday at the Fair Grounds. Weather.com hadn’t forecast rain in New Orleans, but when I went online at noon to make the pick 3 bet that I’d suggested, I got a nasty surprise. The main track was rated sloppy and all races were off the turf, including the first and last legs of the sequence. That made it unplayable for me, even though it would have cost only $15 (down from $37.50 on a 50-cent base bet because of so many scratches). You can’t bet off-track races off grass form.

Strangely, if I’d broken my longstanding rule, I would have been alive into the third leg. Notapradaprice paid a nice price ($15.40) before Gold Street ($4) coasted. Three of my five horses had been scratched from the finale, but Renaissance Frolic briefly made me regret not betting when he led after 6 furlongs. He faded to fifth while even-money Captivating Moon, whom I didn’t like on grass, rallied to complete a $45.20 payoff on a 50-cent play.

This Saturday I’ll try to cash at Gulfstream Park, unless it’s still under water. More than 12 inches of overnight rain submerged its backstretch Monday, forcing trainers to move horses from barns in low-lying areas. More uncertainty: There’s a 50-50 chance of rain Friday and Saturday. If they race on the turf Saturday, it will still have some give in it, so I looked for horses who like good, yielding and soft ground. Just in case, I’m also providing 1-2-3 dirt picks.

I’m focusing on the sixth, ninth and 10th races, all minor stakes on the grass. Stay tuned to The Weather Channel, and good luck.

As usual at the minimum distance, there’s a ton of early speed. Need-to-lead types Travieza, Girls Know Best and Jean Elizabeth should be flying early, with Violent Times and Escapade not far behind. I landed on Rocky Policy, a winner from just off the pace on “good” ground in a 5-furlong stakes at Parx on Sept. 21. The turnback from a late-running second at 6 furlongs should amplify his late kick. I’ll put $15 to win, $5 to place on Rocky Policy and box him in exactas with Eyeinthesky, Miss Gossip and Violent Times. 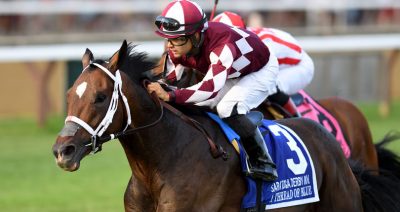 A Thread of Blue – Photo by Chelsea Durand / NYRA

Front-running stakes winner A Thread of Blue has the best resume and is 3-for-3 on Gulfstream’s grass. Problems: He’s 0-for-3 on courses not rated firm and stuck out in post 14. He’ll also be a very short price, so let’s try to beat him for the win.

I settled on trainer Graham Motion’s stalker English Bee, who rallied powerfully to take his last two and was in the money in all three of his races on turf that wasn’t firm. I’ll put $15 to win, $5 to place on him and box him in exactas with Jais’s Solitude, Kadar, Temple, Halladay and A Thread of Blue.

On dirt: Art G Is Back, Forever Mo, Notorious Nick

Pivotal Connection is only 1-for-6 on grass but won at 1¼ miles on good turf and turns back from a close-up fourth in Aqueduct’s very competitive Grade 3 Long Island Handicap at 1 3/8 miles. Trainer Bill Mott will have him primed to beat this weaker field. I’ll play Pivotal Connection $10 to win, $5 to place and key him in exacta boxes with Chipolata, War Cabinet and Limari.