Saturday’s Travers day card is easily the best one we’ll see until Breeders’ Cup Saturday, and it’s hard to imagine that the races on Nov. 6 at Del Mar will be tougher to figure out.

The seven stakes at Saratoga feature a slew of standouts who present an extremely difficult handicapping puzzle. How ironic that we horseplayers look ahead so eagerly to these mega-event days and then realize how challenging it will be to find winners. So much quality, so much confusion.

Except for the Travers, in which 3-year-old superstar Essential Quality will be the odds-on favorite, on paper most of the races look wide open. The Grade 2 Ballston Spa begins the stakes action in the fourth. Races seven through 12, starting with the Ballerina and ending with the Travers, make up a pick 6 of all Grade 1s. Let’s see if I can shed a little light on them.

Predictably, the surging Chad Brown trains half of the six-horse field. He had five wins Wednesday, tying a course record, to move ahead of Mike Maker in the battle for the trainers’ title. I expect Chad’s Viadera (3) will earn her fourth win in her last five tries by rebounding from a bad-trip fourth as the 6-5 favorite. She was stuck behind a slow pace, then blocked at the three-sixteenths pole before flying home way too late in 22 2/5 seconds. I see her leading a 1-2-3 Brown trifecta. 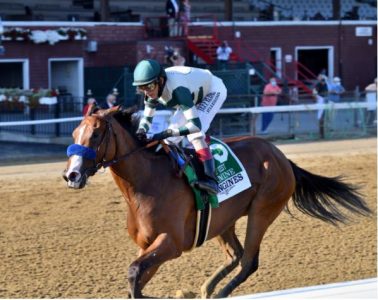 Bob Baffert (remember him?) ships front-running Gamine (1) from Del Mar, where the 2020 filly sprint champ has been working brilliantly. She zipped a half-mile in 44 1/5 seconds last time in a 10-length runaway at Los Alamitos. She won the Grade 1 Test by seven lengths at the Spa last year, and if she’s herself, John Velazquez can name the margin, as he’s done many times.

Three big names — Mischevious Alex, Whitmore and Firenze Fire — lost their last two starts, and I’m steering away from them. Mischevious Alex is 0-for-2 at Saratoga, including an eighth-place no-show, beaten 11 lengths, July 31 as the 7-5 chalk in the Vanderbilt. Whitmore is 1-for-6 at 7 furlongs, and Firenze Fire is 1-for-8 at the track and 1-for-8 overall at the distance. I reluctantly settled on Yaupon (7), last year’s beaten favorite in the Breeders’ Cup Sprint. He’s never tried seven-eighths but he’s 5-for-7 lifetime and won stalking at 6 furlongs last month at Pimlico. He’s training well at Saratoga for Steve Asmussen and should be a decent price.

There’s more speed in here than in a 400-yard quarter horse race at Ruidoso Downs. Life Is Good (6) debuts for Todd Pletcher after going 3-for-3 under Bob Baffert. If not for a minor injury, he would have been the Kentucky Derby favorite, and Mike Smith feels sure he would have won it. Life Is Good beat Derby first-place finisher Medina Spirit twice, once by 10 lengths, but this deep race might be his biggest test. Can he learn a new trick on the fly and stalk, or will he try to front-run Jackie’s Warrior and Drain the Clock into the ground? They’re pretty quick, too. Not sure whether I’ll be betting this race, but it will be fun to watch.

The need-to-lead Letruska (6) was the country’s top-ranked horse for a few months until being displaced by Knicks Go. Not that she did anything wrong, because she’s 4-for-5 this year and a head away from a six-race winning streak. She could face pace pressure from Baffert shipper As Time Goes By and Miss Marissa, and Letruska did run a bad one (fifth last year) over the track, so maybe she’s vulnerable at short odds. I’ll take Chad Brown’s closer Royal Flag (5), a course-and-distance winner coming off a Grade 3 victory over the track against subsequent stakes winner Horologist. Swiss Skydiver, last year’s winner of the Preakness and the Alabama, deserves respect but her form has been going in the wrong direction.

Defending champion Channel Maker (4) led all the way last year but will have trouble doing that against likely favorite Tribhuvan (1), a speed type who’s one of two Brown runners. I’m taking a shot with deep closer Gufo (2), who’s as unlucky as he’s talented and consistent. He’s 6-for-11 on turf, never been out of the money, and always close, but only 1-for-4 in Grade 1s. I’m betting that he and the brilliant Joel Rosario can get the job done this time.