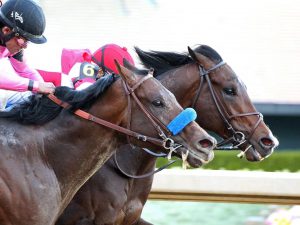 The talented and undefeated Nadal, who shipped in from California for his first start around two turns, faces off against seven other 3-year-odls in the 60th year of the Rebel Stakes, Oaklawn Park’s traditional prep for the meet’s signature event – the Arkansas Derby (G1).

The talented son of Blame, who won the San Vicente (G3) will lead the field to post in his first start away from his home base of Santa Anita after two victories.

A year ago, as racing in Southern California reached crisis level thanks to a staggering number of horses injured and euthanized at Santa Anita, the ripple effects were being felt throughout the thoroughbred industry. Not only was all training and racing suspended for weeks at the West Coast track, the San Felipe (G2) – a major Kentucky Derby (G1) prep race – also was canceled, derailing the plans for the connections of a number of main contenders on the road to the Derby.

Without missing a beat, though, Oaklawn Park officials stepped up and decided they would help and offered a solution – split the Rebel, up the $1 million purse so each division was worth $800,000 and worked with Churchill Downs to keep Derby qualifying points competitive.  And they were rewarded with a pair of nice winners in Omaha Beach, who ended up winning the Arkansas Derby (G1) before being scratched as the Derby favorite two days out; and Long Range Toddy, who while not as famous or successful carries some solid connections and is back in training for a 2020 debut.

Maybe it’s the rich purse, or the race’s reputation as a solid Triple Crown prep (after all, American Pharoah won the Rebel before his Triple Crown run in 2015) or that many of the top contenders are separated by only a handful of points. But there’s little doubt that the Rebel has fast become one of the most anticipated Derby preps.

The Saturday weather is expected to be wet and cool in Hot Springs, with rain and thunderstorms probable and a high near 60. A wet track can be counted on all day.

The field for the Rebel, with jockey, trainers and odds: