A trio of talented distaffers led by slight favorite Shedaresthedevil is set for Sunday’s $300,000 Clement L. Hirsch (G1) at Del Mar, with the winner earning an expenses-paid berth in the Breeders’ Cup Distaff (G1) as part of the “Win and You’re In” challenge series.

The Hirsch is run at 1 1/16 miles with a post time of 6 p.m. PT. The weather calls for a sunny day with temperatures expected to reach the low-80s, guaranteeing another day with a fast track.

The Clement L. Hirsch, once known as the Chula Vista Handicap, was renamed in 2000 to honor Clement Hirsch, the popular horse owner and breeder who founded California’s prestigious Oak Tree Racing Association.

Champion Stellar Wind won this race three years ago for the second time and Eclipse Award winner Unique Bella ran her final career race in this event two years ago.

Hall of Famer Bob Baffert saddled Fighting Mad to victory in 2020 in what was her last win. She was retired earlier this year and is in foal to Curlin.

Trainer John Sadler has a record five winners, one more than Charlie Whittingham; Chris McCarron leads all jockeys with seven wins in the Hirsch. 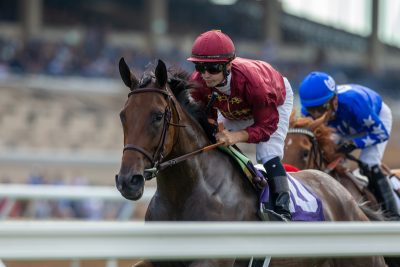 Shedaresthedevil (7-5), who won the 2020 Kentucky Oaks (G1), comes into Del Mar from Ellis Park in Kentucky and is trained by Ken McPeek. The 4-year-old was third in the Ogden Phipps (G1) on Belmont Stakes day after winning a pair of graded stakes, including the La Troienne (G1) at Churchill Downs on Kentucky Oaks day. The filly loves the distance (8-5-1-2) and has a trainer who loves to ship west and win races (think Swiss Skydiver in last year’s Santa Anita Oaks). Her speed figures are strong, her class numbers are high, and she will have regular rider Florent Geroux aboard and the pair will no doubt head right to the front after the break.

Coolmore’s As Time Goes By (8-5) seeks a third straight graded stakes score and first Grade 1 after taking the Santa Margarita (G2) and Santa Maria (G2) in her last two this spring at Santa Anita. The beautifully bred daughter American Pharoah and Take Charge Lady has been out of action since her last start in mid-May but hasn’t missed a beat for Baffert and has some solid works to her credit.

She’s versatile and can win around one turn or two, and while she seems to want to be up on the engine, she can take back a little and still have enough in her tank to finish strongly for the win. Mike Smith will be back aboard.

With one exception – an eighth-place finish in last year’s BC Filly & Mare Sprint (G1) – Venetian Harbor (2-1) has been the picture of consistency. From nine starts, she has four wins and four seconds and all but her debut – a second-place finish – and maiden score came in graded stakes company. After the Breeders’ Cup, the Richard Baltas-trained daughter of Munnings got a nice, long freshening and came back to win the Monrovia Stakes (G3) going 6 ½ furlongs on the turf at Santa Anita as a prep for this race nearly two months ago.

So now, in her second start off the layoff she figures to be fit and ready and though this race may be a tad far for her preference, she will be gunning for the front right from the gate.

Paige Anne, trained by Simon Callaghan, has done well in graded stakes. She’s making her second start of the year off a third in a Golden Gate Fields allowance race and though she’s consistent, having only finished off the board once, she will need improvement to have a chance. Leading jockey Flavien Prat rides.

Warren’s Showtime, a Cal-bred daughter of Clubhouse Ride, has done her best running on the turf and captured the Wilshire Stakes (G3) at a mile at Santa Anita in mid-June. She is undefeated in her one start on the main track at this distance and 0-for-2 at Del Mar.Former claimer Clockstrikestwelve has been a consistent allowance performer but has faltered when being raised up in class to stakes and graded stakes company. She is a nice filly, but this is a tough task against this field.

Cover Version, a Darley-bred daughter of Medaglia d’Oro, is also a former claimer and has had some success in allowance company, but this jump in class will probably prove a bit steep for her