And you thought Triple Crown fever dissipated after the Preakness (G1) earlier this month.

Not so fast friends. There is another pandemic-delayed Crown on the line Saturday, and the venue is Woodbine. 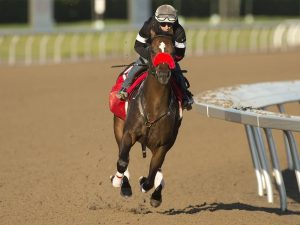 Mighty Heart, the underdog colt with only one eye, bids for the Canadian Triple Crown in the $400,000 Breeders’ Stakes.

With a victory, Mighty Heart would be the 13th horse to complete the sweep. Wando did it most recently in 2003.

There are several similarities between the U.S. Crown and its Canadian counterpart. Both are restricted to 3-year-olds, and both traditionally conclude with the longest race in the series. The Breeders’ Stakes is 1 1/2 miles, once around Woodbine’s sweeping turf course.

There you see one of the fundamental differences in the Crowns. The trio of U.S. races are contested on dirt. In Canada, three different surfaces are employed.

Mighty Heart has already decisively passed two of the three tests. He was the 13-1 upset winner of the Queen’s Plate by 7 1/2 lengths in mid-September at Woodbine over the Tapeta all-weather synthetic track.

He took the shift to natural dirt in stride for the Prince of Wales Stakes at Fort Erie, rallying for a 2 1/2 length victory.

Now comes a 12-furlong challenge over a course likely to be soft this late in the Canadian turf season.

“I can’t tell you how he’s going to handle a yielding turf,” trainer Josie Carroll said. “In North America, we very seldom get the chance to run on very soft turf. I believe he’ll handle the grass. He’s run once on the grass, and we had him up on the course the other day, and he just skipped across it.”

Three races, three different surfaces is a lot to ask of any horse chasing a Crown.

“It’s a very, very challenging thing to be asking him to do right now,” Carroll said. “This horse has run two hard races and now you’re asking him to go a mile and a half on a possibly tiring course. Hopefully, he’s up to the challenge.”

A victory would make Carroll the first woman on either side of the border to train at a Triple Crown winner.

The horse who lost his left eye as a baby in a paddock accident has become a folk hero in Canada.

“In this time of COVID, this is a boost to people,” owner-breeder Larry Cordes said. “The phone calls I get from the west coast to east coast of Canada, my girlfriend and I have had multiple dozens of calls … people are just so excited.”

Another major difference between the Crowns are the eligibility standards. The U.S. series is open to all comers, providing they have enough qualifying points for the Kentucky Derby, and the owners are willing to pay stiff entry and starting fees.

Up north, the Canadian Crown features native-born horses. That explains why the stakes are not graded. Restricting the stakes to horses bred in Canada renders them ineligible for grading.

Belichick, named for the New England Patriots coach and Mighty Heart’s stablemate, is the 7-2 second choice despite being a maiden. He has a pair of seconds and a third in three starts. Belichick has not run since enduring multiple traffic issues to run second to Mighty Heart in the Queen’s Plate.

“This is a really talented horse,” Carroll said of Belichick. “I think from the moment he came into my barn, he showed a great deal of ability. If anything has surprised me, it’s that it has taken this long for him to really blossom.”

Mighty Heart faces a familiar face in Clayton who joins him as the only other horse to contest all three jewels of this Crown. Clayton was third in the Queen’s Plate and the runner-up most recently in the Prince of Wales.

Clayton has hit the board in all six starts and has never gone off at odds higher than 3-1. He is 6-1 on the Breeders’ Stakes morning line. He would be exceptional value — and a must consider — at that price.

The field, from the rail out, with jockey, trainer, owner, odds: