Can Sackatoga Stable Strike Again With Tiz the Law?

Each weekday, I report to my “other” job of scouring the country trying to get school districts interested in bus routing software. It’s a good job, one I’ve had for over five years.

I am assigned a territory encompassing several states, including Pennsylvania. In the western part of the state, there’s Washington County – 28 miles southwest of Pittsburgh. I started calling there five years ago with a sales pitch of selling the transportation department on our software.

The transportation director there is Jim Webb, and at the time, he wasn’t a client. I still don’t recall how it came up, but in one of our conversations, we started talking about horse racing. From then on, each call involved a smidge of business and a lot of horse racing. Even harness racing would come up because Washington is the home of The Meadows, a harness facility that races 12 months a year and a place where Webb and friends visit to bet on the thoroughbreds.

Webb does a bit more than wager on the races – he takes a chance every now and then and puts up some money to become a horse owner. And he does so through Sackatoga Stable, the ownership group led by Jack Knowlton who led racing through a wild 2003 Triple Crown season with Funny Cide by traveling to the races in a yellow school bus.

Webb decided to join the gang from Sackets Harbor, New York and has owned shares of several horses through the years. Sackatoga now has more than 30 owners around the country, and Webb is among the lucky ones with a piece of Tiz the Law, the unbeaten 2-year-old colt trained by Barclay Tagg, who is the favorite for Saturday’s Kentucky Jockey Club (G2) at Churchill Downs.

The syndicate works like this: Knowlton is the managing partner and Tagg has been the trainer from the get-go. Tagg finds the horses, Knowlton facilitates, and horses are bought, trained and then raced.

In August 2018, the annual Fasig-Tipton auction took place during the Saratoga meet. Knowlton and Tagg were there when hip No. 311 was paraded for all to see. Knowlton liked the horse but was determined to cap his bid at $100,000. When the price went up to $110,000 he couldn’t hold back and the son of Constitution was sold to Knowlton and Sackatoga. 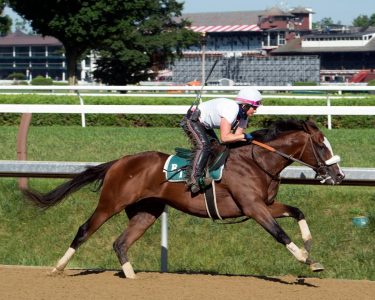 Webb then got a call from Knowlton asking if he wanted a piece of the yearling; Webb agreed and purchased a 3.6 percent stake. The colt was named Tiz the Law and off to Tagg, he went.

What’s the goal of buying a horse? Living the dream of running in the Kentucky Derby, of course. It’s happened once for the Sackatoga crew in 2003, and it could happen again.

has been that impressive: After breaking his maiden on Aug. 8 at Saratoga, the colt faced off against five others in the Champagne (G1), the premier race for 2-year olds at Belmont’s fall meet.

After stumbling a bit at the start, Tiz the Law kicked it into high gear and won the race in an impressive 1:35.41 for one mile. More importantly, the win earned the grandson of Tiznow 10 qualifying points for the 2020 Kentucky Derby.

Since that Oct. 5 victory, it’s been all business for the colt and his connections. Six workouts have followed and the last one was a bullet, 59.60 seconds over five furlongs at Belmont on Nov. 23.

And now it’s the Kentucky Jockey Club at 1 1/16 miles with Derby qualifying points of 10 points to the winner. A win would give him 20 points before 2019 is over. Last year, 38 points was good enough to make the 20-horse Derby field.

Thinking ahead, Webb says the group is looking at a Derby trail that goes through Florida, New York and on to Kentucky.

“They want him in Florida for the Fountain of Youth and then maybe the Holy Bull,” Webb said, “and because he’s a New York bred, the Wood Memorial might be in play.”

“You don’t want to jinx things, but we are looking into hotels for Louisville in the hopes that we will be there on the first Saturday in May.”

Webb plans bus routes for students in the Washington School District, so if things go the right way for Tiz the Law, keep your eyes open for another journey to Churchill Downs in a familiar yellow school bus.