Irish jockey Oisin Murphy will be getting his first taste of the Breeders’ Cup this weekend, but the 23 year old doesn’t need to be told what it’s like riding in big races, competing against some of the world’s best horses.

Murphy has piloted Roaring Lion to victories in three Group One races in Great Britain- the Queen Elizabeth II Stakes, Juddmonte International Stakes and Coral Eclipse Stakes – as well as the QIPCO Irish Champions Stakes (Group 1) in his native country.

He was also the winning jockey aboard Lightning Spear, who captured the Group One Qatar Sussex Stakes at Goodwood in August.

In fact, Murphy has ridden nine Group 1 winners in five countries this year, and he’ll look to win for the first time in the United States, as he has four mounts over the two-day Breeders’ Cup Championships–including being aboard Roaring Lion in the Classic (G1). 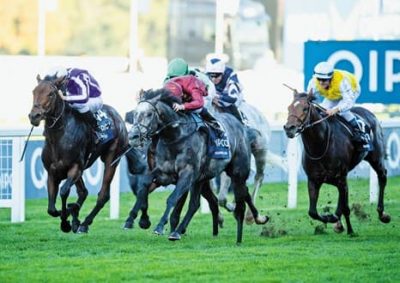 Murphy will ride in an allowance race on Thursday at Churchill Downs, his first attempt race riding underneath the twin spires, before getting in the saddle aboard trainer Archie Watson’s Soldier’s Call in the first edition of the Breeders’ Cup Juvenile Turf Sprint (G1) on Friday afternoon.

He will then be tasked with stretching out The Machem Bullet in the Breeders’ Cup Juvenile Fillies Turf (G1), a one-mile affair on the Churchill Downs turf course.

“She likes to race prominently. She’s stepping up two furlongs in distance (440 meters), but I think she’ll definitely stay,” said Murphy of the Brian Ellison-trained filly who has never raced further than six furlongs.

Having been the jockey in two of The Machem Bullet’s six starts this year, he knows what to expect.

“She’s not going to be making the pace, but she’s going to be somewhere near the lead,” said Murphy when asked about her post position (#2 of 14 in the race).

On Saturday, Murphy will ride both Lightning Spear as well as Roaring Lion in each horse’s final career race; both will be retired after the Breeders’ Cup.

Lightning Spear will contest the Breeders’ Cup Mile (G1), drawing the #11 post, which wasn’t what Murphy had been hoping to see.

“Drawing [post] 11 isn’t ideal in the Breeders’ Cup Mile. I’d like to have a better draw on him. If he runs to his Goodwood form, he would win, but he’s backing up two weeks after Ascot and we’ll have to see what happens,” he said.

While Roaring Lion won the Queen Elizabeth II Stakes (G1) two weeks ago, Lightning Spear finished seventh in the same race while being ridden by Mickael Barzalona. Both the seven year old Lightning Spear and the three year old Roaring Lion need to show they can hold their form running back quickly after shipping overseas.

After getting a chance to ride Roaring Lion on the Churchill Downs dirt on Wednesday morning, Murphy believes the John Gosden-trained son of Kitten’s Joy is ready to tackle the Breeders’ Cup Classic.

“He seems in very good form. He’s backing up two weeks after Ascot. John’s very happy with him. Nobody knows if he’s going to face kickback, but hopefully he can get close to Thunder Snow. Hopefully Thunder Snow races on the pace. That’s one of the ideas I’ll be thinking,” said Murphy on Roaring Lion’s level of preparation for the $6 million race at a mile and a quarter over the Churchill Downs main track.

While Roaring Lion has never raced on the dirt in his twelve race career (he’s started 11 times on the turf and once on synthetic), he will be trying to win on the surface in his first attempt, which is his final race before being sent to stud.

A $160,000 purchase at Keeneland September in 2016, Roaring Lion has earned $3,575,197 prior to the Breeders’ Cup, and will certainly bring owners Qatar Racing many times over that amount when he retires to Tweenhills after the race.

“He’ll go to stud after this, so let’s finish on a high,” said Murphy with a smile.

Ryan Dickey is a full-time firefighter in Dearborn, MI, and a life-long horse racing fan. He is a handicapper and contributor to prominent horse racing Websites as well as a freelance sportswriter/photojournalist. He covers local high school sports and community events for multiple outlets, including bi-weekly newspapers and has over 200 works published to date.