Handicapping the Breeders’ Cup: Dealing With So Much Data, So Many Angles

Handicapping 14 Breeders’ Cup races is fascinating and exhausting. When I went through the pre-entries for the first time, it felt overwhelming. So much data, so many angles, so much confusion. The next day, I did what I always do before getting into serious analysis: finding horses to eliminate.

I went through the past performances a few more times, trying to isolate the leading contenders. Finally, I spent many hours this past weekend doing research on Breeders’ Cup history, trying to find patterns in the credentials of winners.

I focused on Friday’s five 2-year-old races, because unlike Saturday’s card, most of the horses are lightly raced. As they say in England, they’re not “exposed,” so it takes a mix of intuition and guesswork to try to get a fix on their athletic personalities.

Often the past is prologue, so maybe my homework will help me cash a few more tickets than I would have if I hadn’t studied. Putting in the extra hours clarified the picture for me, and I hope it helps you, too. 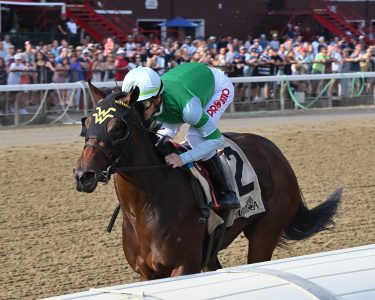 The newest Cup race began in 2018, and all three winners led wire to wire. That’s a tiny sample size, but if you’re thinking about betting a closer, maybe you should think again. I had trouble getting beyond the main speeds, 5-2 morning line favorite Averly Jane and 4-1 second choice One Timer. Grass sprint guru Wesley Ward trains undefeated Averly Jane, a filly who will try to give him his third straight Juvenile Turf Sprint victory.

Echo Zulu, trainer Steve Asmussen’s 4-5 favorite, is flashy, very fast and 3-for-3 with by a total of 16 3/4 lengths. A potential hole is the absence of a two-turn race. Recent history says that may not be a problem. Three of the last four Juvenile Fillies winners hadn’t gone two turns, and of the past 11, only five had. So, if you really like Echo Zulu and don’t mind a short price, maybe you shouldn’t be too concerned. However, her main rivals — Juju’s Map (5-2) and Hidden Connection (5-2) — are stakes winners at 1 1/16 miles. Nothing is ever simple, especially among 2-year-old fillies.

Route experience has been a necessity, because all 13 winners had gone at least a mile on the grass. Chad Brown’s Maram took the race’s 2008 debut, and America’s turf king added four victories. American-based horses have won it the past seven years, and only two Euros — Flotilla (2012) and Chriselliam (2013) — earned the trophy.

Pizza Bianca is the lukewarm 5-1 favorite in a wide-open race with a lot of early speed. I’m leaning toward course-and-distance winner Cairo Memories (post 2, 12-1), and Consumer Spending (8-1) and Turnerloose (12-1) also catch my eye. A $100-plus exacta would be no surprise.

Eight of the past 11 Juvenile champions had won around two turns, including seven of the last eight. Two who hadn’t — Uncle Mo (2010) and Shanghai Bobby — were undefeated and coming from a key prep, the Champagne Stakes, a one-turn mile at Belmont Park. Good Magic is the outlier, breaking his maiden in the 2017 Juvenile after running second in the Champagne.

Like Echo Zulu in the Juvenile Fillies, 6-5 favorite Jack Christopher (post 1) is unbeaten, untested and without two-turn experience. Like Good Magic, he’s trained by Brown and ran in the Champagne. He’s 2-for-2 by 11 1/2 lengths, and it would be no shock if he dominated.

Jack Christopher’s main challenger could be the 2-for-2 Corniche (5-2, post 12), a front-running winner of Santa Anita’s 1 1/16-mile American Pharoah. He could give Bob Baffert his fifth Juvenile victory. Neither colt drew well, so bad-trip chaos could occur.

Euros have an 8-6 edge in 14 runnings. Although the past five winners had won going at least a mile, overall, only eight had gone that far. From 2012-15 George Vancouver, Outstrip, Hootenanny and Hit It a Bomb got there first, and none had run more than 7 furlongs. The conclusion: Don’t eliminate a possible contender based on where he’s from or whether he’s been tested at a mile or beyond. Sprinters stretching out can succeed here.

The tepid favorite is England’s Dubawi Legend (4-1), who’s stuck on the far outside in post 14. I prefer England’s Albahr (6-1, post 2), coming off an impressive win in Woodbine’s Grade 1 Summer Stakes at a mile. Trainer Charlie Appleby has had a tremendous year for international superpower Godolphin, sweeping the Epsom Derby and the King George and Queen Elizabeth II Stakes with Adayar and the Irish Derby and the English St. Leger with Hurricane Lane. He’s also won major stakes in America with Althiqa and Yibir.

Appleby’s first Grade 1 win came in the 2013 Juvenile Turf with Outstrip. He’ll also send out Modern Games (5-1, post 1), who like Outstrip never has been past 7 furlongs.

A little history to help with Saturday’s Turf and Classic 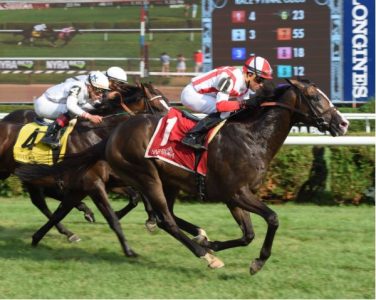 How important is 12-furlong experience for a Turf contender? Very. Of the past 21 winners, 18 had run 1 1/2 miles on the grass at least once, including 14 who had won. Bricks and Mortar, the 2019 champ at Santa Anita, didn’t fit the template, and his 6-for-6 season for Brown made him Horse of the Year. He was even-money in a field with no other standouts, and he had to rally to edge 51-1 shot United by a head.

Like Bricks and Mortar, Brown’s Domestic Spending (4-1, post 3) has never run farther than 1 1/4 miles, so it’s decision time. One of Chad’s longtime owners, Michael Dubb, once said, “With Chad Brown all things are possible,” so I’m giving Domestic Spending the benefit of the doubt.

Irish filly Tarnawa, the defending champion and 9-5 favorite, will be tough to beat, but post 13 and the short price are a tough combination to take. Godolphin’s Yibir (12-1, post 10) also must be respected.

My advice: Except for Domestic Spending, throw out any horse who hasn’t gone 1 1/2 miles or didn’t finish in the money if it did. That would eliminate Acclimate, Astronaut, Sisfahan and Tribhuvan.

The big question about 5-2 favorite Knicks Go is distance. Can the front-running gray win the grand finale in his first try at 1 1/4 miles? Trainer Brad Cox is optimistic that he can clear off, bottom out the field and never look back. With likely pressure from Kentucky Derby winner Medina Spirit and perhaps Art Collector and Hot Rod Charlie, it won’t be easy.

The verdict: History says Knicks Go will be up against it while trying to master a new trick against the toughest field he’s ever faced. If he pulls it off, he’s Horse of the Year without a doubt, but at short odds, the risk far outweighs the reward. I’ll be putting my money on his stablemate, 3-1 second choice Essential Quality, who could work out a perfect stalking trip behind a quick pace and surge late.