The Countdown to the Breeders’ Cup Distaff Continues 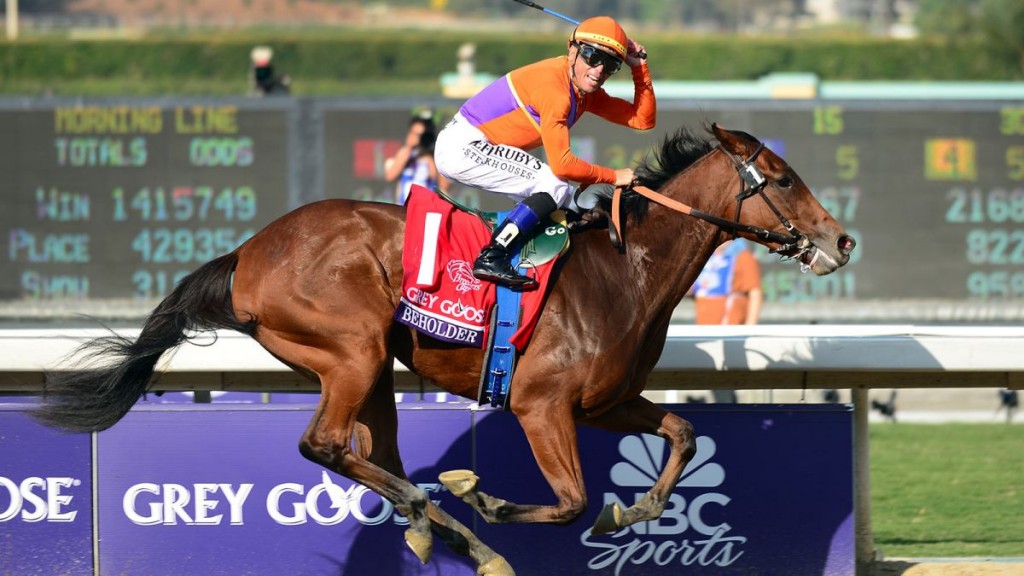 When I chose the name “Anticipation” for my first article covering this year’s Breeders’ Cup Distaff, I thought it was the perfect name for the story, as it was the one race many were most looking forward to — and possibly the toughest. Sure, the Classic is the Classic and California Chrome and Arrogate may put on quite the show, but Songbird at 11-for-11, most with the greatest of ease, and Beholder, one of the best ever looking to go out a winner, figured to be a matchup for the ages. Well horses will fool you at times, and while the Distaff still figures to be a great race, the reasons why have changed a little.

To begin with, Stellar Wind scored her second victory of the year against Beholder in the Zenyatta. It was a game victory in which Stellar Wind stayed just off Beholder’s flank and wore her down in the final yards.

Those who questioned whether Beholder had lost a step or two from 2015 to 2016 seemed to feel validated, somehow forgetting the daughter of Henny Hughes’ second-place finish to California Chrome and the rest of the boys in the Pacific Classic that was sandwiched between the losses to Stellar Wind.

I’m not quite as trigger-happy to say that the old mare has lost a step. I still think Richard Mandela is training her up to a peak race in the Breeders’ Cup. Watching how Gary Stevens rode her in the Zenyatta makes me think so even more. He never really got into her. Instead, he let Stellar Wind dog her all the way around, never opening up or spurting away and, when they were side by side in the stretch, he never really looked like he was asking the old mare for all she had.

I guess we’ll find out soon enough. The major preps are all out of the way and we’ll have to watch how these two, and some others, train up to the race.

The last of the major preps, The Beldame at Belmont, and The Spinster at Keeneland both produced results to make “Anticipation” even more fitting.

The Beldame was run in sloppy conditions and was won rather easily by Forever Unbridled. The field wasn’t the toughest, but the Dallas Stewart-trained filly won smartly and she has been running steady and fast numbers on Thoro-Graph all year long. She’s heading to the Distaff in peak form, actually the best form of her career. Stewart has a habit of getting his horses to run big on big days, so Forever Unbridled is definitely a contender. She’ll need some pace help, but the way the race is shaping up on paper, she just may get the setup she wants.

I’m a Chatterbox, who has been a top stakes performer her entire career, ran the best race of her life in the recently run Spinster at Keeneland. This was likely the last of the Breeders’ Cup Distaff preps and also one of the most impressive. I’m a Chatterbox destroyed the Spinster field and marked herself as yet another one coming into this race in peak form, off her best race ever. Larry Jones is a deadly trainer, especially with fillies, and it might be a mistake to take this one too lightly come the big dance.

With Songbird putting her perfect record on the line, multiple champion Beholder looking to go out a winner, Stellar Wind looking to prove last year’s close second was a sign of things to come and she can beat Beholder when it counts and Forever Unbridled and I’m a Chatterbox looking to prove they belong with the best of the best, we may see something special in this Distaff.

Correction, we will see something special in The Breeders’ Cup Distaff 2016.

Jonathan Stettin
Jonathan has always had a deep love and respect for the Sport of Kings, as he practically grew up at the racetrack. His mother, affectionately known as “Ginger,” was in the stands at Belmont Park the day before he was born as his father, Joe, worked behind the windows as a pari-mutuel clerk.

As a toddler, Jonathan cheered for and followed horses and jockeys, knowing many of the names and bloodlines by the time he was in first grade. Morning coffee in his household was always accompanied by the Daily Racing Form or Morning Telegraph.

At the age of 16, Jonathan dropped out of school and has pretty much been at the races full-time ever since. Of course, he had some of the usual childhood racetrack jobs growing up — mucking stalls, walking hots and rubbing horses. He even enjoyed brief stints as a jockey agent and a mutuel clerk (like his dad).

Jonathan continues to be an active and successful player. You can follow him on Twitter @jonathanstettin or visit his Web site at www.pastthewire.com.