It’s been 20 years since Tiznow won the Breeders’ Cup Classic for the second year in a row. The victory in 2001 came after a gallant stretch duel with Sakhee at Belmont Park in Elmont, New York. Here’s a look at Tiznow’s career, what was going on at the time (less than two months after 9/11), how the race unfolded, and even how it may have inspired the New England Patriots to their first Super Bowl win. The 38th Breeders’ Cup is Nov. 5-6 at Del Mar.

As the football season advanced in December 2001, New England Patriots coach Bill Belichick had every reason to show his team a video of that year’s Breeders’ Cup Classic. Belichick needed a way to stoke the fighting spirit in his players – and he found it in the Classic winner, Tiznow.

The Patriots turned their season around after watching Tiznow regain the lead right at the finish to win the 2001 Classic. Deep in the stretch, Tiznow had appeared headed for defeat when he dug in again and with great determination caught the European wonder, Sakhee, at the wire.

The following February, the underdog Patriots might have had Tiznow in mind when winning their first Super Bowl, as longshots facing the St. Louis Rams, 20-17. Quite possibly they had a race horse to thank.

On this 20th anniversary of Tiznow’s second of two Classic victories, the horse’s model of determination for the football team is a story worth retelling. 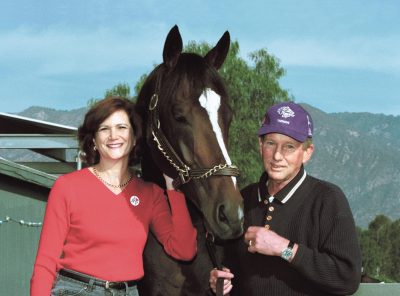 Tiznow became the first to win two successive Classics. But it was this second win in 2001 that people most recall, for this occurred at Belmont Park, in Elmont, New York, when the U.S. was still in shock from terrorist attacks on Sept. 11, 2001.

Tiznow’s Classic triumph took place even as sharpshooters lined the grandstand rooftop. If you stared hard across the way from Belmont to Manhattan, you could still see smoke rising from the site of what was the World Trade Center. Two commercial jets piloted by terrorists had collided with the Trade Center’s twin towers only two months previously, causing the towers to crumble. The sentiment at that Breeders’ Cup was sadness for America, along with the real concern that Belmont Park might come under attack while crowds attended the championship horse races. An uneasy feeling lay heavily over the spectators.

Tiznow made all seem right with the racing world, giving spectators the kind of day they had come to expect from the Breeders’ Cup championships. The Prix de l’Arc de Triomphe winner (Sakhee) battled the American Horse of the Year (Tiznow) for the lead deep through the stretch and appeared to get his head in front – before Tiznow struck back and pulled enough ahead to win by a nose on the finish line. Albert the Great ran third after leading from the initial three-quarters to the mile post.

Tiznow’s nose to the front was not much different from the way he’d won the previous year’s Classic, with the 2000 margin a neck over Giant’s Causeway. Like Sakhee in 2001, Giant’s Causeway came from Europe for the race. Churchill Downs was the site of the 2000 Breeders’ Cup and Tiznow had Chris McCarron in the saddle, just as he would when winning the following year. 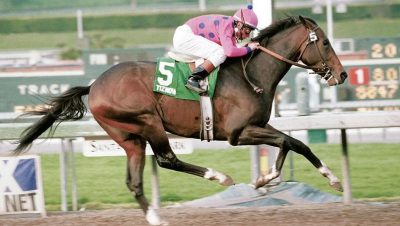 The difference in the 2000 Classic and the race in the following year was that in 2000, Tiznow had the lead by the mile marker and held it for the remaining quarter-mile.

The two Classic wins were the crown in Tiznow’s two-season racing career at ages 3 and 4. He did not race at age 2 after suffering a leg fracture. At 3, he packed a lot into a season that began for him only in April. In July, he nearly looked to be finished as a racehorse when a leg filled behind one knee. Trainer Jay Robbins feared it was suspensory ligament damage.

It turned out that the swelling was related to an infection developing in one of Tiznow’s feet. With the diagnosis confirmed and not as serious as Robbins had feared, Tiznow went out to win the Affirmed Handicap. After the race, his foot was fitted with a patch to support the affected area on his hoof.

Tiznow was a fascinating, large bay horse who had his quirks. Sometimes he did not want to breeze, and on one occasion prior to the 2001 Breeders’ Cup he resisted McCarron’s signals to speed up his gallop into workout mode. He resisted for about 40 minutes. This was like John Henry’s routine pauses he took along the way to the track from his barn each morning.

After retirement to the stud at WinStar Farm near Lexington, Ky., Tiznow acquired another quirk: he learned how to unlatch the door on his stall. He would let himself out into the hall of the barn: not a good idea when other stallions are present in their stalls and likely to become overly excited. 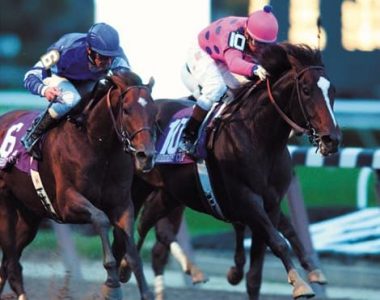 Tiznow came from modest breeding (by Cee’s Tizzy out of Cee’s Song), horses you might not have heard about until Tiznow came along. For this reason, Tiznow was an unknown for his stud potential. His sire had produced a respectable stakes-winner but at the same time, the sire’s 1996 foal crop, for example, numbered only 16 offspring. Breeders back in that day could get two seasons to Cee’s Tizzy for the price of one, at $2,000. The sire’s success improved markedly following Tiznow, and at the time of his death in 2015, Cee’s Tizzy had sired 39 stakes winners and several champions in California.

A thank you from Belichick

In reminiscing about Tiznow, it is worth recalling a footnote to the video shown of his 2001 Breeders’ Cup to the New England Patriots: Coach Belichick sent a Christmas card to Tiznow’s trainer, Robbins. The card was inscribed, “Thanks for the inspiration.”