Hall of Famer trainer Bill Mott is looking for his third BC Classic – his first was with 7-10 favorite Cigar in 1995 and the second with 14-1 longshot Drosselmeyer in 2011.

On Saturday, Mott sends out Art Collector, a talented 3-year-old that was sent to his barn over the summer.

Since the change from Tommy Drury to Mott, Art Collector is 3-for-3, most recently winning the Grade 1 Woodward at Belmont on Oct. 10.

The 3-year-old son of Bernardini is 8-1 on the morning line and leaving from post 6 under Hall of Famer Mike Smith, who has four Classic wins – and Drosselmeyer was one of them.

Art Collector worked4 furlongs in 48.40 at Del Mar on Sunday, and jogged Tuesday. Mott is happy.

“He’s just improved on his own and we haven’t done anything, really, except let him lead one winning effort into another and build himself from race to race,” Mott told the Breeders’ Cup notes team. “He’s got three races in him now and is just doing really good. He looks stronger and has continued to develop, which is what you hope a 4-year-old is going to do. That’s what you want him do and it is what it looks like he’s been doing that throughout the course of the year.” 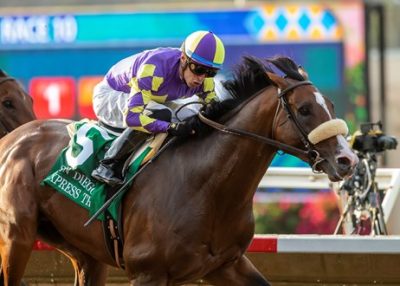 Winner of the San Diego Handicap (G2) at 1 1/16 miles over the Del Mar track this summer, Express Train will try to win for the first time at 1 ¼ miles in the Classic.

He’s trained by John Shirreffs, who won the 2009 Classic with the great mare Zenyatta. A son of Union Rags, Express Train is 0-for-3 at 1 ¼ miles – second in the Santa Anita Handicap, third in the Santa Anita Gold Cup, and sixth in the Pacific Classic, all Grade 1s

“Right now, he’s training at a level above his most recent races,’’ Shirreffs said. “Although he’s yet to win at the (Classic) distance, I’m confident he can get it. In the recent Pacific Classic, he just didn’t get his trip.”

Express Train leaves from post 2 and will be ridden for the first time by Hall of Famer Victor Espinoza.

NBC Sports will showcase the 38th Breeders’ Cup with 11 ½ hours of live coverage from Del Mar Racetrack over three days.

Coverage begins on Thursday at 5 p.m. (ET) on NBCSN with a “Betting the Breeders’ Cup” show.

Live race coverage begins Friday at 5 p.m. on NBCSN and on Saturday at 2:30 p.m. on NBCSN. The $6 million Breeders’ Cup Classic (G1) will be televised live on NBC and Peacock beginning at 8 p.m. Post time for the Classic is 8:40 p.m.

NBC will also pay tribute to the late Bob Neumeier, who was a fixture on NBC Sports’ Triple Crown and Breeders’ Cup horse racing coverage. Neumy died on Oct. 23 at the age of 70.