In the days leading up to the 38th Breeders’ Cup at Del Mar in California, usracing.com is publishing profiles on the horses in the $2 million Breeders’ Cup Distaff (Saturday, Nov. 6). The profiles will be updated following the post-position draw on Monday, Nov. 1. 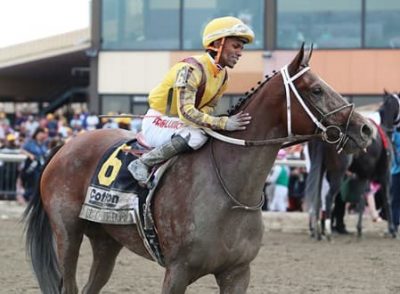 Barbara Banke’s Stonestreet Thoroughbred Holdings bred this talented 3-year-old daughter of Curlin, who is out of three-time Grade 1 winner Cavorting who herself ran in the Breeders’ Cup once and was fourth in the 2015 Filly & Mare Sprint. Curlin, a two-time Horse of the Year, won the 2007 Classic for Banke and her late husband, Jess Jackson. So, this filly’s certainly bred for Breeders’ Cup glory.

Clairiere is coming off a nice win in the Cotillion Stakes (G1) at Parx in September, which came after a strong second in the 10-furlong Alabama (G1) at Saratoga behind Malathaat so this 9-furlong distance should not be any problem.

Clairiere is already in California with trainer Steve Asmussen’s Breeders’ Cup runners and worked 5 furlongs in 1:00 2/5 at Santa Anita on Oct. 24.

Under Asmussen, she’s only finished worse than third once in her nine career starts, a fourth-place finish in the Kentucky Oaks (G1 in April.

Betting advice: In a race with a hot early pace expected, as a late/stretch runner Clairiere will benefit probably the most. This will be her first start against older fillies and mares, which puts her at a slight disadvantage against the likes of Letruska and Shedaresthedevil. She is nothing if not consistent and deserves a long look for all exotics.