Bet on It: Fix Your Mindset and Grow Your Bankroll

It is hard to make a profit at the track year after year. It is even harder to make your living playing the races. Many try and most will fail. It may not be your handicapping that is holding you back, but rather it your mindset. 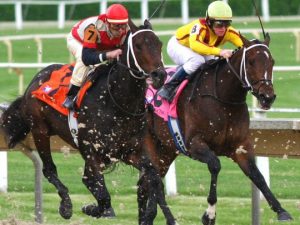 The good news is that you can change your mindset.

The fixed mindset handicapper sticks to only what they know, they are either good at it or not. Like our friend from the old Meadowlands grandstand, The Marine. The Marine only played the 4 ½-furlong sprints from Charles Town. When I asked why he didn’t even consider the two turn races that were run at 6 or 7 furlongs, he was quick to point out that he never wins those. While he loved playing the double, he rarely would get two races that met his criteria running back to back.

Remember that the game is ever changing. You need to always want to look for new opportunities to improve your bankroll.

The fixed mindset handicapper thinks their handicapping is fine the way it is. They are the guys you see at the track that are still running the same figures year after year and wondering why their figures stopped working, but still relying on them when placing their bets.

The growth mindset handicapper asks if this is the best they can do. Can they improve upon the performance of their figures or their handicapping? These are the folks that are burying themselves in data and spreadsheets to analyze their results to constantly tinker and tweak their process.

Again, this game is ever changing. What worked last meet may not work as well this meet. Track your angles and your wagering performance to look for clues to where you can improve your game.

The fixed mindset handicapper complains that there is a lot to figure out and takes a ton of short cuts. You know this guy, he is the one who is always loudly announcing the reason a horse won, and why he lost, after the race is over. “How’d I miss that third off the layoff, lone early speed, and highest third back Beyer figure horse?”

You’ve heard the business quote, “there is no shortcut to success.” The same holds true with handicapping You get out of it what you put into it.

The fixed mindset handicapper is quick to give up when they run into a setback. That setback could be a series of mistakes, a losing streak, or run of bad luck. For them it is easier to throw in the towel than to look for a new strategy.

The growth mindset handicapper looks at setbacks to learn. If they are consistently making mistakes or overlooking a certain factor, they develop a checklist approach to handicap the races to make sure they don’t miss the obvious. If they are in the middle of a run of bad luck, they track the data to make sure it is only a short-term trend. If it turns out to be a bigger issue, they use the data they have collected to adapt their handicapping and wagering approach.

The fixed mindset handicapper doesn’t like feedback. They are quick to take offense if someone disagrees with their assessment of a race of selected contenders. They listen to no one, even if they ask for an opinion, like our friend Rail Guy. After he asks for your thoughts on the third race, he’ll be quick to reply, “dere’s no way da five gets up to win dat race, you must be on crack or somethin’, I’m tellin’ you da two goes wire ta wire.” Even if you are right, he’ll never admit it. He’ll find a million excuses. “Da starter held him back in da gate,” or “dat bum bug boy couldn’t ride a turtle in a straight line.”

The growth mindset handicapper loves feedback. He’ll engage with others talking about the races before and afterwards, looking at it from other’s perspectives. He will pour over charts and revisit his angles and figures to see where he may have a weakness. He will do a premortem and try to see what holes he can poke in his own handicapping before the race runs.

Insanity is doing the same thing over and over and expecting a different result. Use feedback as Susan Powter used to tell us to “stop the insanity.”

The fixed mindset handicapper dismisses anyone who is successful. This could be another more successful handicapper or a high-profile figure like Andy Beyer. They feel handicapping comes easier to them and that they were born wired that way. They exhibit jealously and are overly critical of anything others do.

Remember, imitation is the most sincere form of flattery.

Changing your mindset from fixed to growth will offer you more profitable opportunities at the track. By unlocking your mind and allowing yourself to grow mentally, so will your bankroll.