Baffert Seeks Another Sweep of Starlet, Futurity at Los Alamitos

Bob Baffert looks to continue his dominance of the Southern California juvenile scene as he seeks a third consecutive sweep of the Starlet and Los Alamitos Futurity on Saturday.

The two-time Triple Crown winning trainer sent out Dream Tree and McKinzie to take the two races in 2017 and Chasing Yesterday and Improbable a year ago. This time, he’ll be represented by a pair in each race — Bast and Gingham in the Starlet, and High Velocity and Thousand Words in the Futurity.

Overall, he’s saddled five Starlet winners and 11 Futurity winners dating back to before the races were moved to Los Alamitos in 2014, when Hollywood Park was still open. 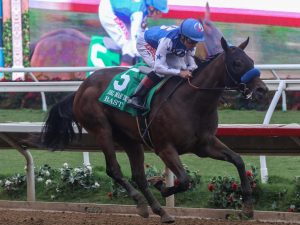 Baoma Corp’s Bast, a daughter of Uncle Mo and the Arch mare Laffina, has won two of her four career starts, including the Del Mar Debutante (G1) and Chandelier Stakes (G1) and her most recent effort in the Breeders’ Cup produced a third-place finish behind British Idiom and Donna Veloce. She has been training exceptionally well over the past five weeks at her home base of Santa Anita and Baffert retains the services of jockey Drayden Van Dyke, who was aboard the $500,000 yearling purchase for her first two starts before being sidelined by a hand injury and replaced by John Velazquez for the filly’s last two.

It took Sarah Kelly and Jane Wiltz’s Gingham four tries to break her maiden and, after three runner-up finishes, she finally did so in impressive fashion at a mile in a nice come-from-behind performance at Santa Anita on Halloween. This is her first start against winners, but the $420,000 daughter of Quality Road has always shown professionalism and class and will get the pace she likes to run at in the lane. Recent Del Mar leading jockey Abel Cedillo picks up the mount.

Kaleem Shah, Mrs. John Magnier, Michael Tabor and Derrick Smith’s Donna Veloce was second by a neck to likely champion British Idiom last out as the 2-1 favorite in the Breeders’ Cup in what was just her second career start. The $800,000 daughter of Uncle Mo, who is trained by Simon Callaghan, broke her maiden in wire-to-wire fashion but showed some tactical capability in her off-the-pace performance in the Breeders’ Cup. She’s a determined filly and is the deserving 4-5 favorite. Flavien Prat will be back aboard.

Doug O’Neill will send out Roadrunner Racing and W.C. Racing’s Roadrunner’s Honor after a flat fourth-place performance in the Desi Arnaz Stakes at Del Mar a month ago. The Honor Code filly, who will route for the first time in her third career start, will be ridden by Geovanni Franco.

Karl Pergola’s K P Dreamin beat just one in the Breeders’ Cup, but in her defense the Jeff Mullins trainee had a terrible start and was never a factor. The Union Rags filly, who broke her maiden in her second start and was then third in the Chandelier, will be ridden by Ruben Fuentes. 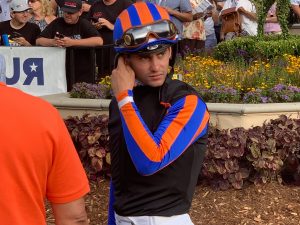 Just four will line up for the Futurity, led by $1 million yearling purchase Thousand Words. The Spendthrift Farm and Albaugh Family Stables LLC color-bearer won his only start at Santa Anita back in late October under Flavien Prat after which Baffert set his sights on this race for the son of Pioneerof The Nile. He’s had some impressive workouts, including two bullets, and is a legitimate 8-5 morning line favorite despite his single start.

Gary and Mary West’s High Velocity is undefeated in two starts and most recently captured the 7-furlong Bob Hope Stakes at Del Mar three weeks ago. The $350,000 son of Quality Road and the Dixie Union mare Ketel Twist will have jockey Drayden Van Dyke aboard for a second time.

Peter Redekop’s Anneau d’Or makes his first start since his second-place finish to Storm The Court at odds of 28-1 in the Breeders’ Cup Juvenile on Nov. 1. Blaine Wright trains the son of Medaglia d’Oro, who was purchased as an April Ocala Breeders’ Sales 2-year-old in training. Juan Hernandez will be back in the saddle.

Wrecking Crew was second in both the Best Pal Stakes (G2) and Del Mar Futurity (G1) over the summer before finishing third in the Breeders’ Cup. Peter Miller trains the $825,000 son of Sky Kingdom for Rockingham Ranch and David Bernsen. Jockey Abel Cedillo rides.