Authentic Outkicks Tiz the Law to Win Kentucky Derby; No Triple Try in 2020

Moments after one of his horses was scratched from the $3 million Kentucky Derby (G1), a tearful Bob Baffert was on his way to winner’s circle after his other entry, Authentic, outkicked favorite Tiz the Law in front of an eerily empty grandstand at Churchill Downs on Saturday to win the 146th Run for the Roses.

The 1 ¼-length win by Authentic ($18.80) ended Tiz the Law’s domination of the 3-year-old division, and dashed any hopes of a Triple Crown going into the Preakness (G1) on Oct. 3 in a topsy-turvy racing year due to the COVID-19 pandemic. 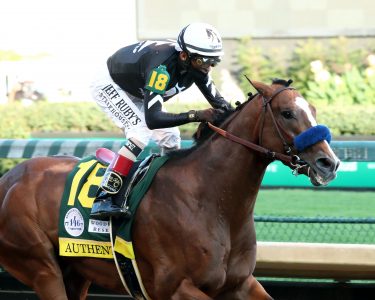 Authentic, as expected, was guided right to the lead by Hall of Fame jockey John Velazquez from the far outside post, and never relinquished it despite a bold challenge at the head of the stretch from Tiz the Law, winner of the first leg of the 2020 Triple Crown, the Belmont Stakes (G1) on June 20.

“It’s always a concern that you let the horse do too much early in the race,’’ Velazquez said. “You like to save ground and save some horse for the end. Bob was pretty certain the horse was ready today. I let him get loose and get comfortable.”

Right before the race, the Baffert-trained Thousand Words flipped over in the paddock and was an automatic scratch. The horse’s antics also sent Baffert assistant Jimmy Barnes to a local hospital with a broken arm.

“Unbelievable. I’m worried about Jimmy. He broke his arm,’’ Baffert, choking up, said. “All I can say is this horse ran out of his mind. Johnny V – perfect ride. I owe it all to my crew. Jimmy, poor guy is in an ambulance right now, can’t enjoy it. This is so emotional the ups and downs in this game. Unbelievable.”

“He should be here,” added Baffert, who with the victory tied “Plain Ben” Jones for the most Derby wins for a trainer with six, three of them in the past six years including Triple Crown winners American Pharoah (2015) and Justify (2018). Baffert, meanwhile, was upended in the winner’s circle by Authentic, who acted up during the trophy presentation.

Under sunny skies, and with about 1,000 people at the track rather than the usual 150,000 fans cheering on the horses, the people who sent out 2003 Derby and Preakness winner Funny Cide showed up in a pair of yellow school buses as they did 17 years ago. But it was not to be for Jack Knowlton, managing partner of Sackatoga Stable and 82-year-old trainer Barclay Tagg.

Tiz the Law, the odds-on 3-5 choice with Manny Franco aboard, had been 4-for-4 in 2020, winning the Belmont and the Travers (G1) in his previous two starts.

“He gave me everything,’’ Franco told Tagg and Knowlton after the race. “You rode him perfect,’’ Knowlton said, according to the Daily Racing Form.

It was a tough beat for Tagg: “You can’t beat Baffert. My horse ran hard.”

Authentic, meanwhile, had barely beaten Ny Traffic in the 1 1/8-mile Haskell (G1) and many thought he would have trouble with the 1 ¼-mile Derby.

That didn’t happen as Authentic won for the fifth time in six career starts, his only loss coming to Honor A.P. in the Santa Anita Derby (G1).

“The key to this race was the break. We’ve been planning this out the last couple of nights at Jeff Ruby’s (steak house),’’ Baffert said. “We knew we had to get away from there. We talked about where certain people would be. Johnny is a world-class jockey and knows where everyone should be. I told him what I thought and he told me what he thought. I said, ‘I like your plan.’’’

Baffert knows well what it’s like lose a classic, too.

“Tiz the Law is a top notch horse. I feel bad for the connections. I’ve been there,’’ Baffert said, whose first Derby entrant, Cavonnier, finished second by a nose in 1996. “But this never gets old. We just feel so fortunate and blessed.”

Winning time for was 2:00.61, seventh fastest in Derby history.

The emotions Baffert had to deal with Saturday is a microcosm of the year he’s had. At one point, he had two unbeaten 3-year-olds, Charlatan and Nadal, after they won divisions of the Arkansas Derby (G1) in May. Both were sidelined, and Charlatan was DQ’d from his win when a post-race test was positive for lidocaine.

Justify’s 2018 Triple Crown was called into the question by the New York Times in a story about how the horse should have been DQ’d from the Santa Anita Derby that year because of a positive test for a banned substance and would not have qualified for the Derby.

On Friday, his star filly Gamine was beaten in the Kentucky Oaks (G1), and his 2016 3-year-old champion Arrogate died in at the age of seven in June.

There had to be a sigh of relief from the racing world when the finish was declared official. Sixteen months ago, when the Derby is typically run on the first Saturday in May, Maximum Security finished first but 22 minutes after an inquiry, he became the first ‘winner’ to be disqualified for a racing infraction. Runner-up Country House was elevated to first place, and Maximum Security DQ’d to 17th.