Authentic: Off to the Breeding Shed for BC Classic, Derby winner 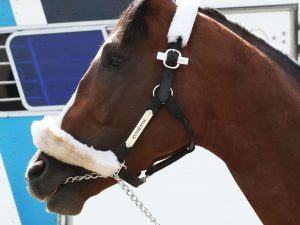 The 146th Kentucky Derby winner did very little wrong in a brief but brilliant career, and really, what’s wrong with finishing second in two Grade 1 races?

Authentic won his other six starts, and he humbled the skeptics again with a front-running victory by 2 1/4 lengths in Saturday’s $6 million Breeders’ Cup Classic (G1). He’s a sure thing for Horse of the Year and the 3-year-old male Eclipse Award, and he had nothing left to prove.

Which is why Monday morning’s announcement that he was being retired to stud at B. Wayne Hughes’ Spendthrift Farm in Lexington, Kentucky, came as no surprise. His stallion value could not be higher now. The leggy chestnut colt made $6,191,200 for Spendthrift, My Racehorse, Starlight Racing and Madaket Stables, and his earnings will be exponentially higher in the breeding shed. His first-year fee will be $75,000, and he’ll cover dozens of blue-blooded mares.

“Ultimately, we just felt there wasn’t a lot more to accomplish for a Kentucky Derby and Breeders’ Cup Classic winner, so we have made the decision to retire Authentic to stand alongside his champion sire, Into Mischief,” Spendthrift general manager Ned Toffey said in a press release. “It is very rare that you come across a 3-year-old as well bred, talented and accomplished as Authentic.”

His Classic runaway was a grand finale for Hall of Fame trainer Bob Baffert’s latest superstar. Authentic, under John Velazquez, blasted through 1 1/4 miles in 1:59.19, a Keeneland record and the fastest Classic in 16 years. He left behind six Grade 1 winners, including his standout stablemates Improbable and Maximum Security along with Belmont Stakes hero Tiz the Law. (Both Improbable and Maximum Security were retired on Sunday).

RELATED: 2020 Horse Of The Year? BC Classic Winner Authentic Is Clear Choice

“He just kept getting better,” Baffert said. “He caught up to all of the older horses. He’s just so good. He’s fast. Johnny said he felt better Saturday than he ever did. He’s a great horse. He’s proven that he’s the best of his class, the best of the year.”

Throughout the summer there was speculation that Authentic would have problems staying 10 furlongs. Running second after a bad start in the 1 1/8-mile Santa Anita Derby (G1) created doubts, and they multiplied after he lost focus late in the 1 1/8-mile Haskell (G1) and hung on by a nose. Baffert blamed Authentic’s issue on immaturity, not lack of stamina.

Bettors had second thoughts, which is why he paid $18.80 in the Derby, the first time he wasn’t the favorite. He fell short by a neck to top filly Swiss Skydiver as the 3-2 favorite in the Preakness (G1), which led to his generous 4-1 odds in the Classic. Horseplayers should have listened to Baffert, an all-time great with six Derby trophies and four from the Classic. He said he was seeing constant improvement and never thought distance would wear down Authentic.

“He showed us raw talent early in his career, but he was tough to figure out,” Baffert said. “He was never sick, always sound, loved to run, but I had to train him to focus. He’s just a quirky guy. Sometimes he got distracted out there. He sees things and hears things. He’s high-strung and really loud. He’s got that alpha personality, like all the great ones do. But what a horse. He’s the real deal.”

Velazquez, a 48-year-old Hall of Famer, didn’t ride Authentic until the Derby. He excelled there, but he peaked in the Classic.

“It worked out perfect,” he said. “Bob said to take him to the lead so he doesn’t wander so much and keep his mind on running. It worked out. He did everything I wanted him to do. Having the privilege to ride a horse like this, it’s a gift from God.”

War of Will, winner of the 2019 Preakness (G1) and this year’s Maker’s Mark Mile (G1) on the turf, also was retired. He arrived Monday morning at Claiborne Farm in Paris, Ky., around the same time that Authentic stepped off the van at Spendthrift, about 14 miles away

WinStar Farm announced it will stand three horses from the Classic — runner-up Improbable, also trained by Baffert; third-place Global Campaign and Tom’s d’Etat. Global Campaign may be kept in training to run in the Pegasus World Invitational Stakes (G1) on Jan. 23 at Gulfstream.