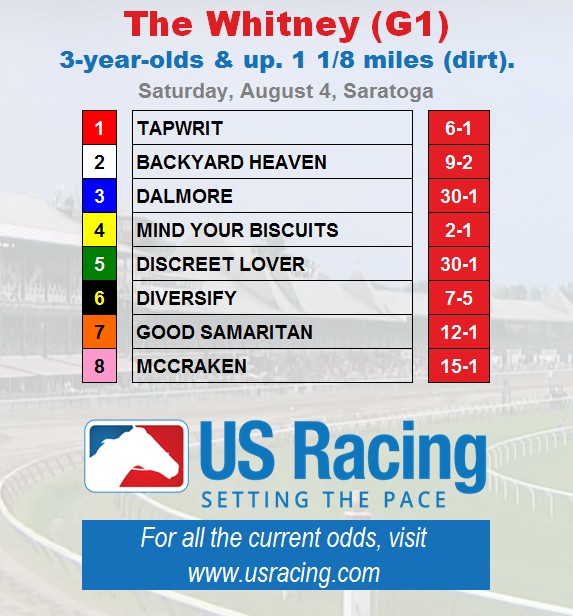 Diversify and Mind Your Biscuits headline a field of eight in Saturday’s 1 1/8-mile, $1.2 million Whitney (GI) at Saratoga Race Course, with the winner receiving an automatic berth into the $6 million Breeders’ Cup Classic on Nov. 3 at Churchill Downs.

Last year’s Whitney winner, Gun Runner, went on to be named Horse of the Year.

The 5-year-old Diversify comes into the Saratoga feature off two wins at Belmont Park. He captured the one-mile Commentator Stakes on May 28 and returned on July 7 with a dazzling 6 ½-length, wire-to-wire score in the Suburban Stakes.  The Rick Violette-trained gelding has been made the 7-5 morning line favorite.

Mind Your Biscuits, who, like Diversify, was bred in New York, is one of world’s best sprinters, but has never tried a distance longer than a mile. Worse, he’s 0-for-3 in his 8-furlong races, although the son of Posse did finish second in the Metropolitan Handicap and the Cigar Mile — both Grade I events.

Trained by co-owner Chad Summers and ridden by Joel Rosario, Mind Your Biscuits is a two-time winner of the Golden Shaheen Stakes (GI) in Dubai. His other Grade I win came in the Malibu Stakes at Santa Anita Park.

Another horse that could have a say in Saturday’s outcome is Backyard Heaven, who had a three-race winning streak snapped in the Stephen Foster (GI) last time. The son of Tizway ran the worst race of his career at Churchill Downs that day, pressing the pace before giving way badly to finish 10 ¾ behind Pavel as the odds-on favorite. Whether the Chad Brown trainee just had a bad day or has class limitations — the Foster was his first foray into Grade I company — should be determined this weekend.

Also in the field is last year’s Belmont Stakes (GI) champ, Tapwrit. Trained by Todd Pletcher, Tapwrit finished fifth in the Suburban Stakes last time out. His best finish at Saratoga came in the Travers Stakes (GI), in which he was fourth, beaten nine lengths by West Coast.