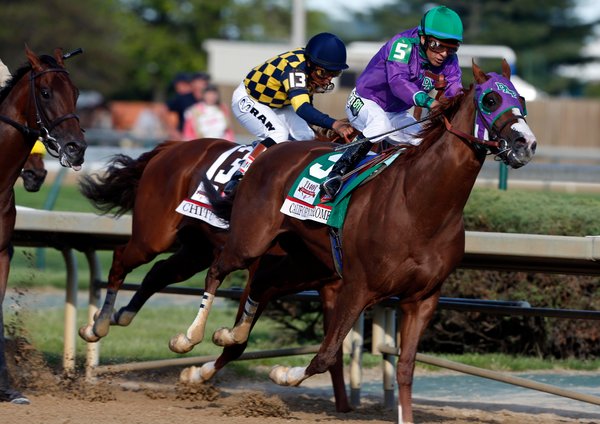 When I first started writing about horse racing — back when knickerbockers were a fashion choice and not a basketball team (OK, so maybe I’m exaggerating just a little bit) — I used to offer free selections and I would track my ROI.

Yet, despite recording healthy profits for years with Youbet.com, VegasInsider.com and TwinSpires.com, I eventually grew tired of the endeavor (it’s a lot of work), so I quit doing it.

Well, I’ve had a change of heart.

I don’t know how consistent I can be in putting out selections — as I said, it’s a lot of work — but I do think there’s value in: a) Demonstrating how one can (hopefully) achieve success through a numbers-based approach and b) Showing folks that playing the races for profit needn’t be a boom or bust proposition.

In addition to my own analysis, I will also lean, sometimes heavily, on the various computerized methods and angles that I’ve developed over the years. So, without further ado, let’s look at some races slated for this weekend:

11-THE WOLF IS BACK qualifies for multiple angles and looks like a particularly good exotics key.

5-MOONSHINE PROMISE has a .500+ Performance Rating and is strictly the one to beat.

FOUND MONEY appears to be the one to beat, but he’s going to be a really short price coming off what was arguably the best performance of his career in the King Glorious at Los Alamitos on Dec. 12.

Personally, I’m intrigued by RARE CANDY, who tries dirt for just the second time in his life following a decent fourth-place finish in the Cecil B. DeMille Stakes on the lawn Nov. 29. Although trainer David Hofmans is an abysmal 0-for-28 with horses switching from turf to dirt, I think this son of Twirling Candy could move up on the main, especially with blinkers added, which is the case on Saturday.

To me, this race comes down to two things: 1) The pace and, specifically, the tactics of Mystery Train and 2) California Chrome.

According to my figures, the projected pace of the San Pasqual figures to be on the moderate side (-5 early speed ration), which I think is a huge advantage for ALFA BIRD… provided MYSTERY TRAIN isn’t hell-bent on getting to the front. Alfa Bird has the best overall ESRs and, in my opinion, is quicker than Darrell Vienna’s charge, but the latter has shown the tendency to pull and, if he does so this weekend, it could ruin any wire-to-wire hope that “Bird” has.

Then, of course, there’s California Chrome, who, according to his trainer Art Sherman, is in the best shape of his life — a scary thought when one considers that the son of Lucky Pulpit was two lengths away from sweeping the Triple Crown in 2014.

“He’s the best he’s ever been since I’ve had him,” Sherman said after California Chrome drilled six furlong in 1:10.04 on Saturday, Jan. 2. “He looks ready to me. I got him [galloping out] in 1:22.20 for seven eighths. If he has a good trip, he’ll be tough to beat. He hasn’t run in nine months and there’s nothing like a having a race, but working like this in front of the public is the next-best thing.”

Still, co-owner Perry Martin readily acknowledges that the San Pasqual is not Chrome’s primary goal; it is merely a prep for another shot at the Dubai World Cup on March 26 (last year, California Chrome finished second behind longshot Prince Bishop).

“This race, whether we win or lose it, isn’t the goal,” Martin said. “It’s Dubai. Of course we would like to win them all.”

Although he’s finished second in five of his last nine starts, STRETCH was just claimed by a trainer (Francisco Vallejo) with a positive ROI off the claim and in sprints. Better still, the son of Swiss Yodeler drilled four furlongs in 46 seconds flat for his new connections on Jan. 3.

Note: All bets should total the same amount. For example, if one is wagering $30 per race, the three suggested exacta bets in the fourth race at Delta Downs on Friday, should be $10 each (3 x $10 = $30). Also, any race taken off the turf or altered in any way should be passed.