One of the strangest Triple Crown seasons I can think of ended Saturday evening at Belmont Park, when the party of the second part (Mark Casse) defeated the party of the first part (Bill Mott) in the third and final chapter of three days at the races.

The above, of course, is a reference the Marx Brothers’ “A Night at the Opera,” that perhaps best describes this year’s kooky Kentucky Derby, Preakness and Belmont Stakes.

And, as Chico said to Groucho in “A Day at the Races,” you must have a code book to figure it all out. With that, here’s a look at what happened over the last five weeks.

In the Derby on May 4, unbeaten Maximum Security crossed the finish line first, but was disqualified for interference in the stretch. Second-place finisher 65-1 long shot Country House (trained by Mott) was declared the winner by the racing stewards at Churchill Downs. Of course, legal action ensued and continues after the first race-related DQ in Derby history.

Two weeks later, with neither Maximum Security nor Country House around, War of Will (trained by Casse), who was affected by the interference kerfuffle in the Derby, came back and won the Preakness. What will likely be remembered most, though, was Bodexpress rearing up out of the gate, unseating John Velazquez, and running riderless with the rest of the field around Pimlico Race Course.

And Saturday, on a gorgeous day in New York, it was Casse (remember, he’s the party of the second part) in the Belmont winner’s circle with a 10-1 long shot not named War of Will (Sir Winston). War of Will was ninth. Mott (party of the first part) left with a runner-up finish again, not with a horse named Country House, but with 9-5 favorite Tacitus. There was no inquiry.

And let’s not forget that before all this, Arkansas Derby winner Omaha Beach was the leader of the 3-year-old division and the Derby favorite. But he was scratched a few days before the race with a breathing issue.

After Sir Winston, with Joel Rosario aboard, held off a closing Tacitus by one length, Casse could be forgiven when a sly grin crossed his face. During the week, he had said, “at this time last year, if you had asked me to rate our top 20 2-year-olds, he (Sir Winston) would have been 16th or 17th.’’ 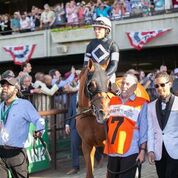 Yet Sir Winston enters the record books as a Classic winner, along with Country House (surely, with an asterisk) and so many other unlikely 3-year-olds who somehow, some way found themselves in the winner’s circle after the Derby, Preakness or Belmont.

So now we set off into racing’s summer season – the Haskell Invitational (G1) at Monmouth Park, the Jim Dandy (G2) and Travers (G1) at Saratoga, the Pacific Classic (G1) at Del Mar, the Queen’s Plate (G1) at Woodbine, then the two-day Breeders’ Cup, still scheduled to be held at Santa Anita on November 1-2.

As we sort through what has to go down as one of the strangest Triple Crowns ever, we’re not looking at any standout 3-year-olds. Funny how racing works. A year ago, Justify rode into history by completing a perfect career in sweeping the Derby, Preakness and Belmont and becoming the 13th Triple Crown champion.

While Casse did win two of the three Triple Crown races with different horses – a rare feat accomplished by Todd Pletcher and D.Wayne Lukas – here’s his take on who’s currently leading the division.

“Right now, knowing what I have, in, three weeks, we have to try to win the Queen’s Plate. That’s what we were saying.”

What we’re saying, as Chico said to Groucho in peddling those racing code books at the track: “Here’s your ice cream. Tootsie-frootsie ice cream.”

It’s going to be a wacky summer.