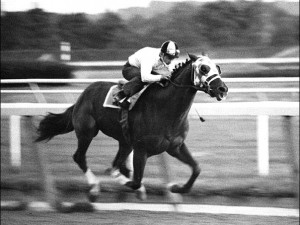 If not for the great Secretariat, Sigmond Summer and Claiborne Farms’ Sham would have been the best 2-year-old of 1972 and best 3-year-old of 1973, thanks to his impressive California-based march toward the Kentucky Derby in the care of trainer Frank “Pancho” Martin.

The nearly black son of Pretense and the Spinaway Stakes-winning Princequillo mare Sequoia won his first four races as a juvenile/early sophomore before running into trouble in his final three Derby preps, though he did finish in front of Secretariat the first time they met in the 1973 Wood Memorial.

Secretariat still holds the record for the fastest Derby and in addition to being well-known as the horse to have finished closest to him in the Derby and Preakness, Sham is also known to own what is likely the second-fastest Derby time. Secretariat was clocked in 1:58.40 for the 10 furlongs and Monarchos in 2001 posted the second-fastest time at the distance under the Twin Spires of 1:59.97, three one-hundredths of a tick faster than the 2:00 Northern Dancer posted in 1964. However, if going by the old rule of thumb that 1/5 of a second equals one length, then Sham’s 2 ½-length deficit to Secretariat in 1973 makes his final time 1:59.90, which is seven one hundredths faster than Monarchos. It’s a debate that’s always fun.

Sham went on to finish second in the Preakness and last in the Belmont Stakes, where he was injured and then retired to Spendthrift Farm and subsequently moved to Walmac, where he’d spend the rest of his life before passing away from a heart attack at age 23 in 1993.

In 2001, Santa Anita Park decided to honor 1973’s best colt from the West and that year’s Santa Anita Derby winner with his own race, and since then the Sham Stakes (G3) has served as Southern California’s first major Derby prep of the New Year. And this year, as in years past, the winner will collect 10 points to make the gate at Churchill Downs on the first Saturday in May.

Though no Sham winner has ever made a substantial impact since its first running, the race does continue to draw some of the better names during the early stages of the Triple Crown trail and certainly horses who went on to big things, like two-time Breeders’ Cup Dirt Mile (G1) winner Goldencents, fellow Dirt Mile winner Tapizar, Travers winner Colonel John and last year’s Whitney (G1) winner McKinzie, who should be one of the favorites for the Pegasus World Cup (G1) at Gulfstream later his month.

Hall of Famer Bob Baffert has sent out the winner of this race a leading five times and this year will be represented by a pair of maiden winners in Authentic and Azul Coast.

Authentic, who will lead the field to the gate, broke his maiden in impressive fashion at 5 ½ furlongs at first asking two months ago and has been working and training well over the track since. The $350,000 Into Mischief colt is bred for his first attempt at two turns, and Drayden Van Dyke, looking for his first Sham win, will be back aboard.

Watson, Weitman and Pegram’s Azul Coast was a first-out winner at Los Alamitos a month ago at this distance and returns with a pair of handy works, including a nice 5 furlongs in 1:00 1/5 on Sunday. His owners paid $350,000 for him as a Keeneland yearling and while he’s yet to make up his purchase price, this talented son of 2007 Derby winner Street Sense is loaded with upside and potential. Joel Rosario, who is quickly becoming Baffert’s new go-to jockey, has a good shot at winning this race for the first time.

Trainer Richie Baltas, who has been red-hot so far in the young meet with five winners, including three on New Year’s Day to tie for the lead in the standings, has had a ton of luck coast to coast winning stakes with mostly turf horses and though has yet to excel down the Kentucky Derby trail, it’s probably happening eventually. He kicks off the year with Calvin Nguyen Joey Tran’s promising Taishan, who broke his maiden in impressive closing fashion in his second start at this distance here two months ago. The Twirling Candy colt, who was a $150,000 2-year-old in training purchase 10 months ago, will carry veteran jockey Aaron Gryder again.

Baltas will also saddle Bederian, Kamberian and Nakkashian’s Uncaptured Hero, who broke his maiden last out wearing a $100,000 price tag. He’s another who hasn’t tested two turns yet and though he doesn’t have a pedigree that screams “Classic winner” he should be able to get the distance. Flavien Prat will be aboard.

Zimba Warrior came out of the same sale as Taishan and the $62,000 son of Khozan (a $1 million, twice-raced, undefeated son of Distorted Humor is out of the A.P. Indy mare Delta Princess, who is also the dam of Royal Delta, Crown Queen and the recently deceased Delta Prince) has a pair of stakes placings since breaking his maiden at Fresno in October, but has never raced around two turns. Keith Desormeaux, who has posted an upset or two with a seemingly overmatched but well-meant runner or two, trains for Cynthia and Charles Marquis and Jose Valdivia Jr. will be back in the saddle.

Scoring is the lone maiden in the field after earning a second in his only start at 4 ½ furlongs more than six months ago. Doug O’Neill trains the son of Justin Phillip and Abel Cedillo rides.

The Sham Stakes is the fifth race on Saturday with a post time of 1:40 p.m. PT.