The rainy conditions in England will continue at least through the morning hours on Wednesday, so for day two at Royal Ascot the ground will more than likely continue to have some give in it. The feature on the second day of the meet is the Prince of Wales’s Stakes (GIT), a 1 ¼-mile event named in 1892 for the Prince of Wales and now run in honor of the current titleholder, Charles. There was no race during World War II when there was no Prince of Wales, but it was resurrected in 1968, a year before Charles was given the title. Some of the more notable winners of the feature for older distance runners include Dubai Millennium, Bosra Sham, Fantastic Light, Rakti, Ouija Board, Duke of Marmalade, So You Think, The Fugue, Highland Reel and Poet’s Voice a year ago. 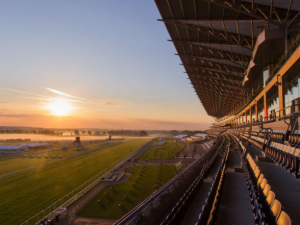 This year, a field of eight will break from the gate, including Sir Evelyn de Rothschild’s King George VI & Queen Elizabeth Stakes (GIT) winner Crystal Ocean, who won last year’s Hardwicke Stakes (GIIT) over this course during this meet. The 5-year-old son of 2009 Prix de l’Arc de Triomphe winner Sea The Stars has never finished worse than second in his 14-race career and will carry jockey Frankie Dettori for trainer Sir Michael Stoute. Both trainer and jockey have won this race three times previously.

Breeders’ Cup Turf (GIT) runner-up Magical is the one to beat here off three straight group wins this year, including the Tattersalls Gold Cup (GIT) at The Curragh three weeks ago. Aidan O’Brien has won this race three times, all for this ownership group of Smith, Tabor and Magnier and seeks a fourth for them, while jockey Ryan Moore seeks a second after having piloted Highland Reel to victory two years ago. The 4-year-old daughter of superstar stallion Galileo drew the innermost post position. Sunderland Holding Inc.’s Sea of Class, another offspring of Sea The Stars, makes her first start since a runner-up finish to the great mare Enable in last year’s Arc. This 4-year-old filly is super consistent and has never finished worse than second in her six career starts, notching four wins. James Doyle, who was aboard Poet’s Voice for the win here a year ago, is looking for his second consecutive and third overall win in the £750,000 race.

A field of 28 juvenile fillies is expected for the five-furlong Queen Mary Stakes (GIIT), a race named in honor of the British Queen Mary, best known as the consort

of King George V and the grandmother of the current Queen Elizabeth II. American-based Lady Aurelia captured this event three years ago en route to a French Group 1 victory and this year her trainer, Wesley Ward, will send out Breeze Easy LLC’s 5 ¼-length Keeneland maiden winner Anna’s Fast for the five-furlong turf dash.

Preakness Stakes (GI)-winning jockey Tyler Gaffalione has made the trek from America to pilot the $470,000 daughter of Fast Anna and the pair will break from post 22. Ward also won this race with Jealous Again in 2009 and Acapulco in 2015. Ward will also leg up Hall of Fame jockey John Velazquez on Ten Broeck Farm’s Kimari, a 15-length maiden winner at Keeneland back in April. The bay daughter of Munnings drew post 18 for her turf debut. Godolphin will be represented by the Charlie Appleby-trained maidens Divine Spirit and Theory of Time, the Saeed bin Suroor-conditioned maiden winner Final Song and two-time winner Ickworth. All are considered strong to earn a larger share of the purse. The Queen Mary is the first race of the day with a post time of 9:30 a.m. ET.

The other Group 2 on the Wednesday Royal Ascot card is the one-mile Duke of Cambridge Stakes (GII), the named changed from the Windsor Forest Stakes six years ago in honor of Prince William, the current Duke of Cambridge. For fillies and mares, four years old and up, a field of 17 is expected to break from the starting gate.

Soviet Song, who in 2004 was the highest rated older female in the world and was a multiple European champion (she died in 2015) is perhaps the best known winner of this event.

Abdullah Saeed Al Naboodah’s Rawdaa is trained by Sir Michael Stoute, the leading trainer in this stakes having sent out four winners previously. This daughter of Teofilo is consistent, having never finished worse than third, but has only managed a second and third so far in her two starts this year. Frankie Dettori has surprisingly never ridden the winner of this race and will be aboard this filly for the first time. Aidan O’Brien, who surprisingly has never won this race, sends out Smith, Magnier and Tabor’s I Can Fly, a group 2-winning daughter of Fastnet Rock who is best known by American racing fans as the 12th-place finisher in last year’s Breeders’ Cup Mile (GIT). Ryan Moore returns after guiding her to a second-place finish in the Lanwades Stud Ridgeway Pearl S. (GIIT) at The Curragh three weeks ago. Post time for the Duke of Cambridge has been set for 11:20 a.m. ET.