The Legend of Seabiscuit and the Santa Anita Handicap 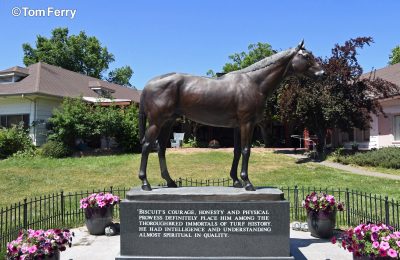 The Santa Anita Handicap is a highlight of the Santa Anita race meet every year. This year, the field does not have the star power it’s had in recent years, however, what is important, is the history behind the race itself and how the winner of this race will plant itself firmly into the history books.

The Santa Anita Handicap was inaugurated in 1935, only a few short months after the track opened in 1934. The race was quickly known as the “Hundred-Grander,” as the race, back then, was worth $100,000, which was a hefty purse. From the time the Santa Anita Handicap was put together until 1969, the race was open to three-year-olds and older. The race currently is open to horses four-year-old and older.

Arguably the most famous horse to ever win the Santa Anita Handicap was Seabiscuit, the hard-knock horse with a jockey named Red Pollard. By the time Seabiscuit started in “The Hundred-Grander” for the first time in 1937, the race was worth over $125,000.

The race was a close one. Seabiscuit and Red Pollard were seemingly home free until a horse named Rosemont flew up on their right side and, in the shadow of the wire, Rosemont put his nose down first. It was later revealed that Pollard had not seen the horse due to the fact that Pollard was blind in his right eye — a fact he had hidden from owner Charles Howard, trainer Tom Smith and every other connection he had made in the racing world.

In 1938, Red Pollard had to sit out of racing after suffering a shattered leg due to a fall while riding a horse named Fair Knightess, another of Charles Howard’s horses. George “The Ice Man” Woolf took the mount on Seabiscuit, as he was not only a successful jockey, but a good friend of Red Pollard’s.

The first race Woolf rode Seabiscuit in was the Santa Anita Handicap.

Seabiscuit would suffer another close loss to a horse named Stagehand, that year’s Santa Anita Derby winner. Stagehand had been assigned thirty less pounds than Seabiscuit.

In June of 1938, Pollard was on the mend and agreed to work an old friend’s horse named Modern Youth. The young horse was very spooked and the work ended up with Red Pollard getting thrown from the colt and, once again, shattering his leg, seemingly ending his riding career.

After a match race with top horses Ligaroti and War Admiral, both of which Seabiscuit won, in 1938, Seabiscuit began training for the 1939 Santa Anita Handicap, but suffered an injury after stumbling in a race. The diagnosis was a ruptured suspensory ligament in the front left leg.

Seabiscuit was rested on Howard’s farm where, miraculously, he made a full recovery, eventually returning to training.

On Feb. 9, 1940, not only did Seabiscuit make his racing comeback, but he did so with Red Pollard in the irons. Seabiscuit finished third that day, but, without discouragement, the duo returned to racing in the 1940 Santa Anita Handicap after having a couple more preparation races under their belts.

Seabiscuit finally got his win in the Hundred-Grander after charging through a hole between two horses named Whichcee and Wedding Call.

This year, the Santa Anita Handicap, more commonly known now as the “Big ‘Cap,” lacks a story like Seabiscuit’s, but has some interesting faces returning to racing, all of which hope to stamp their places in history with a win. New York-bred Effinex enters the race as the likely favorite, assigned the high weight of 123 lbs. Six-year-old gelding Imperative has the next-highest weight at 120lbs. These two are the most accomplished horses in the field, which includes General A Rod, Donworth, Point Piper and Hard Aces.

The race will be held at Santa Anita Park in Arcadia, California on Saturday, March 12. The Santa Anita Handicap is race 10 of 11 scheduled races on the card.

Casey has visited tracks in Ohio, Kentucky and New York, covering events from a weekend at Keeneland to the defeat of a Triple Crown winner. As a student, Casey is hoping to break into the racing world with her photos and her writing.

She has a personal blog named A World Full of Furlongs and a photography portfolio on Flickr named Casey Laughter Photography. She also writes for another horse racing website named Lady and the Track.