Jimmy Takter still a factor at the Hambletonian 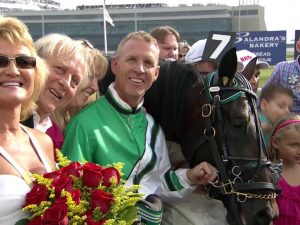 Jimmy Takter remains a looming presence in the $1.2 million Hambletonian on Saturday afternoon even though he retired at the end of last year.

The Hall of Fame trainer-driver certainly left his mark upon the 3-year-old trotting classic.

Takter conditioned four Hambo winners, tying him with Chuck Sylvester for second on the all-time list. Takter and Sylvester are one victory behind the record holders, a harness racing Holy Trinity of Billy Haughton, Stanley Dancer and Ben White.

With the record within reach, Takter opted to walk away at the still youthful age of 58.

For those who don’t closely follow the sulky sport, a valid thoroughbred comparison to Takter would be a certain silver-haired, dark-shades wearing conditioner based in Southern California who is always a factor in the Kentucky Derby.

Yes Bob, we’re talking about you.

Takter, after decades of competing at sport’s highest levels, opted to retire to travel, develop some hobbies and spend more time with his wife Christina.

Gone, but certainly not forgotten.

Like D. Wayne Lukas, the Takter stable was a finishing school for aspiring trainers. Lukas developed Todd Pletcher, Kiaran McLaughlin, Mike Maker — to name just a few — into leaders in the sport.

Marcus Melander and Nancy Johansson, graduates of the Takter academy, are poised to launch their own Hambletonian legacies.

Melander is locked and loaded with four horses, including the favorites in both elimination heats at the Meadowlands Racetrack. The 16 entrants were divided into a pair of eight-horse eliminations, each worth $100,000.

The top five finishers in each elim return later that afternoon for the $1 million showdown to crown the next Hambletonian champion.

The road to this Hambletonian runs straight through Melander’s quartet.

In the first elimination, the eighth race on the stakes-laden card, Melander hitches up the undefeated Gimpanzee, last year’s Dan Patch divisional champion, and Green Manalishi S, who has never finished worse than third in 14 career starts.

And those two might not be his best shot.

In the ninth race, the second elim, Melander sends out Gerry and the smooth-striding Greenshoe, who might be the most talented colt in this crop.

Greenshoe crushed the competition in his Stanley Dancer Memorial division last month at the Meadowlands, trotting the mile in a season’s best 1:50 1/5.

It would be no surprise to see at least three Melander horses in the final.

Melander learned from the master. He kept his two stars apart until this moment. Gimpanzee is 3-for-3 this year, racing in New York. Greenshoe, 4-for- 5 this season, took the New Jersey-Pennsylvania route after Melander consulted with driver Brian Sears.

“That was our plan and I couldn’t be more happy,” Melander said. “Greenshoe has been unbelievable and he should be the favorite, but it will be very exciting to see Gimpanzee on this track.”

Melander, 27, received the 2018 Rising Star Award from the U.S. Harness Writers Association. He joined Johansson as the only trainers to receive the honor in the past 20 years. His stable earned $2.86 million in purses in 2018, good for 15th among all trainers in North America, despite having the fifth-fewest starts among all trainers in the top 50.

Melander came to the U.S. from Sweden less than five years ago and worked for Takter before starting his own stable in late 2014. He is based in New Egypt, N.J., at a farm that was home previously to both the legendary Stanley Dancer and the Continental Farms stables.

An important family connection also plays a role for Johansson. She is Takter’s daughter and the trainer of Don’t Let’em in the second Hambo elimination. Christina Takter, her mom, is part of the ownership group of the colt who is 6-for-14.

Perhaps it will be Johansson who takes home that fifth Hambletonian trophy for the Takter clan.