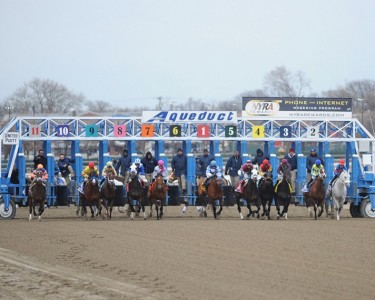 Since 1976, no horse has won the Gotham Stakes and gone on to win the Kentucky Derby. There have been plenty of successful racehorses to come out of the race, however. Horses such as Gone West, Private Terms and Easy Goer won the historic race.

Easy Goer had been Champion Two-Year-Old the year prior to his Gotham win. Easy Goer also finished second in both the Kentucky Derby and Preakness to a horse named Sunday Silence, but would defeat that rival in the 1989 Belmont Stakes.

Are any of the 2016 Gotham Stakes contenders following his path to the Triple Crown trail?

The first of three Uncle Mo colts is Loaban, who is still a maiden. The Eric Guillot trainee has yet to win a race. His best placing in maiden special weight company is a second, which then caused the trainer to send the colt into the Grade III Sham Stakes, which is seemingly coming up as a very unimpressive race. Laoban finished third there. The colt does not have a pedigree that suggests his best races will come around two turns, as he is out of a Speightstown mare. This one is 15/1 on the morning line for a reason.

The unbeaten Shagaf comes in 2-for-2, hoping to exit 3-for-3 and gain valuable Derby points. However, he has some work to do first.  He broke his maiden at Aqueduct before traveling to Gulfstream to try allowance company. Trainer Chad Brown has the colt fit coming into this race. He has been working nicely at Palm Meadows and is bred like a horse that wants two turns. The colt is by Bernardini out of an Unbridled’s Song mare. The mare herself is out of a daughter of Tabasco Cat, a Belmont Stakes winner. Look out for this colt, here and moving forward.

Adventist was third last out in the Withers Stakes, which was won by Sunny Ridge. He recently put in a nice bullet work at Belmont Park, going five furlongs in 1:01.20. Trainer Leah Gyarmati typically has her horses pretty cranked for races at Aqueduct. I am not sure if he quite good enough yet, but there is also not much to judge with only two races under his belt.

Rudy Rodriguez sends out his longshot in Vincento, a son of Include. The colt broke his maiden first out at Belmont and, since then, has had three races at Aqueduct. His last out was in the listed Gander Stakes, where he finished fourth. He was the favorite in that race but had a rough trip, causing him to weaken. I may draw a line through the race and give him a serious look to get a piece of the pie.

The five is a Derby sleeper of mine named Mo Power. He is the second of the Uncle Mo colts in this race. His last out was his maiden score, coming in only his second lifetime start. Pletcher has been giving him maintenance works at Palm Beach Downs in Florida. This seems like a very good spot for him to make his stakes debut. I am not sure I would send him into the Derby but I like this colt moving forward, for sure. He is bred to appreciate two turns.

Conquest Big E went last out in the Holy Bull, where he finished fourth behind Mohaymen. He never looked exactly comfortable to me and didn’t seem his best. He only owns two wins, which have come over sloppy tracks. He did finish second in his debut to a good horse in Brody’s Cause, which was on a fast track. He can handle it, but so far, he has yet to defeat top competition. Can he catch a break here?

The likely favorite of the eight is Sunny Ridge. This gelding is from the last crop of Holy Bull, who has sired plenty of good horses, including his Kentucky Derby winner, Giacomo. The New Jersey-bred has only one race where he finished worse than second. He comes in off a win in the Withers Stakes at Aqueduct.

However, he has not been working quickly at all. Whether this means anything is hard to say, but it worries me just a bit. Still, he is the horse to beat. Trainer John Servis has a long-term goal to get this gelding to the Haskell.

Rounding out the field is the third of the Uncle Mo babies. Rally Cry comes in off a third-place finish in an allowance at Gulfstream. Todd Pletcher must believe that this colt shows some stakes potential or he would not be in this race. Rally Cry has never been worse than third in three starts, so he has shown he can be competitive. The colt has been working well at Palm Beach Downs and comes into the race in good shape.

The Gotham Stakes looks wide open, with each horse showing some degree of talent.  Sunny Ridge is clearly the most battle-tested horse in the field. Shagaf looks like a horse that has a lot of upside potential and talent. He has an undefeated record to uphold. Mo Power looks good here as he makes his stakes debut against a quality, but one lacking in star power. Conquest Big E is finally getting some good experience under his belt and may pose a threat here.

Casey has visited tracks in Ohio, Kentucky and New York, covering events from a weekend at Keeneland to the defeat of a Triple Crown winner. As a student, Casey is hoping to break into the racing world with her photos and her writing. She has a personal blog named A World Full of Furlongs and a photography portfolio on Flickr named Casey Laughter Photography. She also writes for another horse racing website named Lady and the Track.