Of the six races set for Royal Ascot on Thursday, the nearly 2 ½-mile Gold Cup (GI) is the main attraction and the lone Group 1 on the day. The race, formerly known as the Ascot Gold Cup but renamed to Gold Cup in honor of Queen Elizabeth II’s birthday in 2016, is probably Europe’s most prestigious event for “stayers” or horses who like to run marathon distances. Since U.S. racing doesn’t support distance races like the Gold Cup outside of steeplechasing, it’s a bit of a foreign event and a rare treat for American racing fans.

The rainy weather in Berkshire is expected to let up by post time on Thursday and the afternoon is expected to be dry, beautiful and warm, with highs in the mid-60s.

The first race, though only a Group 2, can be argued to be the co-feature – the Norfolk Stakes (GIIT), the first major race for juveniles on the European racing card. It is a Breeders’ Cup Challenge “Win and You’re In” event, which earns the winner a spot in the starting gate for the Breeders’ Cup Juvenile Turf Sprint (GIIT) at Santa Anita in November.

Some well-known names globally have visited the Royal Ascot winner’s circle after a Norfolk score since the race was first run in 1843 as the New Stakes. It was renamed in 1973 in honor of the Duke of Norfolk and has been a third-day staple for the meeting since. A long list of standout names grace the record books as winners of the five-furlong dash, including Turtle Creek, Lucky Lionel, No Nay Never and Johannesburg. 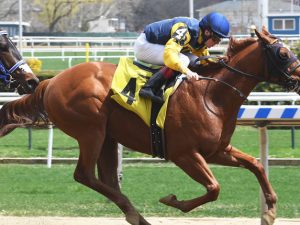 A field of 15 promising juveniles, including Maven (the first American winner for Triple Crown winner American Pharoah) will run in the £100,000 Norfolk. Wesley Ward, who trained No Nay Never to win in 2013 and Shang Shang Shang a year ago, will saddle Maven, who was bred by the trainer and is now owned by Richard Ravin. Tyler Gaffalione will ride again in the pair’s first turf start and also first race since the colt’s debut win over Keeneland’s main track in mid-April.

The bookmakers have made King Power Racing Co.’s Sunday Sovereign the early favorite off of two straight wins from three starts in Ireland. Paddy Twomey trains the son of Equiano and jockey Billy Lee will be back aboard.

Godolphin’s runner is the colt Expressionist, a talented son of Night of Thunder who broke his maiden over the Ascot turf at this distance five weeks ago. Stable jockey James Doyle will be back aboard.

Ballydoyle will be represented by King Neptune and Mount Fuji, one facing winners for the first time and the other looking to get back to the winner’s circle. King Neptune broke his maiden in his debut over the all-weather at Dundalk before earning a pair of seconds in stakes at The Curragh last month. Aidan O’ Brien’s 20-year-old son, Donnacha, will handle the reins again. Mount Fuji won a five-furlong maiden event at Cork in his debut. The son of Dark Angel will be ridden by Ryan Moore.
Post time for the Norfolk is 9:30 a.m. ET.

Defending champ Stradivarius, who hasn’t lost a race in six outs since October of 2017, will defend his title for trainer John Gosden and jockey Frankie Dettori. The 5-year-old son of Sea the Stars also won last year’s Yorkshire Cup (GIIT), Goodwood Cup (GIIT) and the Lonsdale Cup (GIIT) to land the first £1million Weatherbys Hamilton Stayers’ Million bonus. Just like a year ago, he enters this race as the favorite off a win in the Yorkshire Cup at York.

Godolphin’s reigning Melbourne Cup (GIT) winner Cross Counter is in after a winter in Dubai where he won the Dubai Gold Cup (GIIT) for trainer Charlie Appleby in his 2019 debut. While this may be a little far for him, he’s only finished off the board once in his nine-race career.

Fan favorite Big Orange won this event last year and Order of St. George won the year before for Tabor, Smith and Magnier, giving Mrs. Magnier and her trainer, Aidan O’Brien, a record seventh win in the race. Yeats won this event four times for the Ballydoyle team from 2006 to 2009 and added his name to a list of past winners that includes Kayf Tara (twice) and Sagaro (three times). 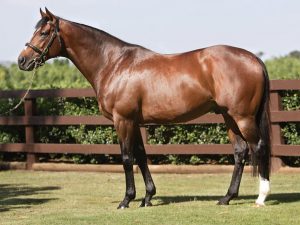 This year, the powerful Irish racing conglomerate will be represented by a trio –Capri, Flag of Honour and Cypress Creek, all well-bred sons of top sire Galileo.

Capri is a Group 1 winner who hasn’t had a ton of luck recently racing at under two miles, so maybe the stretch out will help his chances under Donnacha O’Brien.

Flag of Honour has earned three seconds heading into this event, including the Tattersalls Gold Cup (GIT) last out, and his connections are no doubt hoping the added half-mile and the switch to jockey Ryan Moore will be of benefit. He was fourth in the Quipco British Champions Long Distance Cup (GIIT) over this course in October.

Cypress Creek won a two mile Group 3 at Naas last year, but has struggled when the competition gets stiffer. Seamie Heffernan will be aboard.