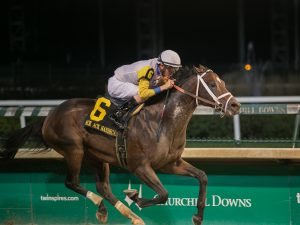 Saturday’s $600,000 Stephen Foster Stakes (GII) at Churchill Downs marks the last major stakes at the Louisville oval for the spring meeting and the first time the nine-furlong feature for the older horse division will be run under stakes conditions after being held under handicap status since its first running in 1982. Also, the race received a downgrade to a grade 2 this year after having been a grade 1 since 2002, but that didn’t stop the connections of some of the best horses from the older route division from dropping their names into the entry box.

The Foster is one of six graded stakes on tap for Saturday night’s card at Churchill Downs.

The Stephen Foster was named for the famed composer called “the father of American music”, who penned the historic song “My Old Kentucky Home” which is played every year on the first Saturday in May as the Kentucky Derby (GI) horses make their way toward the starting gate. The list of winners of the Foster is impressive and includes four eventual Horse of the Year title winners and five Breeders’ Cup Classic champs. Names on the list even the casual fan will recognize include Gun Runner, Fort Larned, Blame, Curlin, Saint Liam, Perfect Drift, Street Cry, Victory Gallop, Awesome Again and Black Tie Affair.

Hall of Fame jockey Pat Day rode three winners during his storied career (1985, 1988 and 2003) and Robby Albarado, who perennially is a leading rider at Churchill Downs, also counts three wins. Four trainers – Patrick Byrne, Jere Smith, Mark Casse, and Forrest Kaelin — have saddled two winners each and none of the three who are still active will be represented with a runner this year.

Champion Victory Gallop still owns the stakes record of 1:47.28 set in 20 years ago. 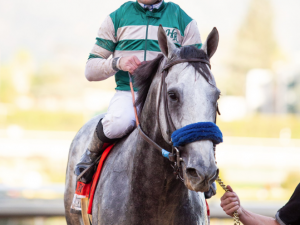 Santa Anita Handicap (GI) winner Gift Box is the early 3-1 favorite in the field off his runner-up finish to Vino Rosso in the Gold Cup at Santa Anita (GI) on Memorial Day, May 27. He has been trained by California-based John Sadler after being purchased privately from Will Farish by Kosta and Pete Hronis late last year. The gray son of Twirling Candy will again be piloted by Joel Rosario, who is fresh off his triumphant ride aboard Sir Winston in last week’s Belmont Stakes and the pair will break from post position six.

“He’s really taken to Churchill Downs well since he’s arrived,” former jockey Juan Leyva, who is now Sadler’s assistant, said. “I absolutely love coming here. With 12 horses entering the Stephen Foster it didn’t come up easy by any means but we’re confident our horse is ready to run a big effort. It’s been great getting him in the (Churchill Downs Stakes) barn. He shows so much grit and determination every time he runs.”

China Horse Club, Head of Plains Partners and WinStar Farm’s Yoshida is a grade 1 winner on turf and dirt, having won the Turf Classic Stakes and Woodward Stakes last year, but unfortunately carries a pair of disappointing sixth-place finishes in the Pegasus World Cup Turf in January and the Dubai World Cup 2 ½ months ago. Trainer Bill Mott gave the Japanese-bred son of Heart’s Cry the entire month of April off and the 5-year-old has been training for this race at Saratoga for more than a month.

“Before we ran him in the Woodward, he never had a start on the dirt but always trained well over it,” Mott said. “He really showed us that day that he can run over it in the afternoon as well. It’s great to have options with him and knowing he’s won Grade I races on both surfaces doesn’t hurt either.”

Seeking the Soul has done some of his best runnings over Churchill’s main track, logging a record of 11-3-2-4 in Louisville, which includes the 2017 Clark Handicap (GI). He’s made nearly $3 million as racing’s most talented runner-up, including in this year’s Dubai World Cup, and he has been training well for this race off a third in the May 3 Alysheba Stakes (GIII) last out. Dallas Stewart trains the 6-year-old son of Perfect Soul for breeder Chuck Fipke and jockey John Velazquez will be back aboard. The pair were given morning line odds of 4-1.

“He’s really been bouncing around perfectly over this track,” Stewart said. “He was doing so well after the Dubai World Cup that we ran him in the Alysheba as a prep for the Stephen Foster. He ran good that day but I think he can do much better in the Foster.”

“Looking at the race I’d expect him to be on the lead or close to the pace,” Bridgmohan said. “(Alkhaatam) has some speed but we can be right there with him early. I don’t expect the pace to be too quick, though.”

WinStar Farm and China Horse Club are represented by another runner (in partnership with SF Racing) in Quip, who will be ridden by Florent Geroux. The son of Distorted Humor got an eight-month break after the Preakness Last year and will make his third start of 2019 and his first since winning the Oaklawn Handicap (GII) in April.

“I think it was the best thing that could have happened to him, getting time off,” trainer Rodolphe Brisset said. “He came back so much stronger and mature. I think he can really make a name for himself in the older horse division this year.”

Winchell Thoroughbreds’ Tenfold won the Pimlico Special (GIII) six weeks ago and looks to give trainer Steve Asmussen his third Stephen Foster, having saddled Curlin to victory in 2007 and Gun Runner year before last. Regular jockey Ricardo Santana Jr. will be back aboard.

The Stephen Foster has been carded as the 9th race with a post time of 9:47 p.m. ET. 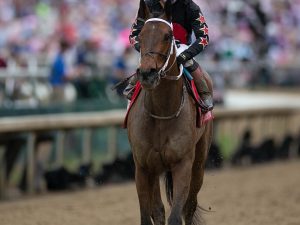 In the 44th running of the $250,000 Fleur de Lis Stakes, Bradley Thoroughbreds, Whispering Oaks Farm, Team Hanley, Madakat Stables and Tim and Anna Cambron’s She’s a Julie, fresh off her stunning win in the La Troienne Stakes (GI) on Kentucky Derby Day, will face off with Adele Dilschneider’s multiple grade 1 winner Elate, who has yet to win in two starts in 2019, and four others.

She’s a Julie is trained by Hall of Fame conditioner Steve Asmussen and is named for his wife, who is a cancer survivor. The daughter of Elusive Quality will have Ricardo Santana Jr. aboard on Saturday.
“I was so proud of her effort in the La Troienne,” Asmussen said. “It was a lot of fun winning that race with such a special filly to our barn and named after my wife.”

Elate is a 5-year-old mare by top sire Medaglia d’Oro, who was third in the Apple Blossom (GI) and second in the Azeri (GII) at Oaklawn Park over the winter. She won two grade 1s last year and was sent to the sidelines for the remainder of 2019 after a second-place finish in the Personal Ensign Stakes (GI) at Saratoga. Jose Ortiz will ride.

Admission Office, who was trained by Chad Brown until his last two starts, finished just a half-length behind multiple graded stakes winner Catholic Boy in the Dixie and seeks his initial career stakes victory here. Joel Rosario will ride the son of Point of Entry.

The Wise Dan has been carded as the evening’s 6th and will break from the gate at 8:37 p.m. ET