Fillies in the Belmont Stakes

Previously I highlighted how fillies have historically fared in the Kentucky Derby and Preakness, but how have they stacked up in the Belmont Stakes?

The Belmont Stakes has produced the fewest filly starters of the three legs of the Triple Crown, yet does have both the highest winning percentage and percentage of fillies finishing in the money.

Unlike the other two Triple Crown races, the Belmont only boasts a 26 year drought between filly starters which is in line with the Kentucky Derby (23 years) whereas the Preakness had a 41 year stint without a filly starter. However, while Rachel Alexandra broke an 85 year filly Preakness winner drought in 2009, Rags to Riches ended a 102 year drought between filly winners in the Belmont Stakes!

102 years. The Chicago Cubs had it worse between World Series wins at 108 years, but not by much. They have won the World Series the same number of times that a filly was won the Belmont Stakes.

So who are the three amazing fillies that bested the boys at Belmont?

The first was actually at Jerome Park in the first running of the Belmont Stakes. In 1867, a bay filly named Ruthless beat her stablemate by a head to capture the first running of the Belmont Stakes at a distance of 1-5/8 miles. She would retire with a seven wins and four places in eleven career starts. Sadly, she would be killed by a hunter in 1876.

The next filly to win “The Run for the Carnations” was the chestnut filly Tanya in 1905. Tanya would be the first of back-to-back Belmont Stakes wins for trainer John W. Rogers and the first of four Belmont Stakes winners for owner Harry P. Whitney. She won the race by half a length and defeated her half-brother, Hot Shot, who finished in third.

The last filly to run in the Belmont Stakes would be Unlimited Budget in 2013. She finished sixth behind Palice Malice for trainer Todd Pletcher with Rosie Napravnik aboard.

The honor roll of fillies to finish in the money at the Belmont Stakes: 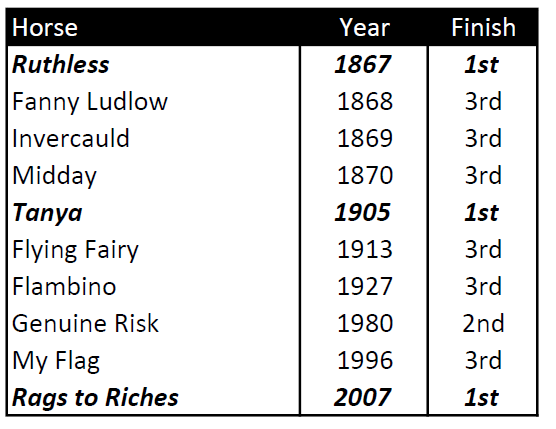 Genuine Risk finished second by two lengths in 1980. This made her the only filly to finish in the money in all three Triple Crown races after having won the Kentucky Derby and placing in the Preakness. In 1988 Winning Colors would be the only other filly to run in all three legs of the Triple Crown, having won the Kentucky Derby, finishing third in the Preakness, and sixth in the Belmont Stakes.

Whether you are a casual racing fan or you make your living playing the races, it is always exciting to see a filly chase history. So who will be the next filly that runs with the boys in the “True Test of Champions”. Looks like we’ll need to wait until at least next year to find out!