For the first time in years, the Spa will go with two dark days – Monday and Tuesday – following the first weekend, and run through Sept. 2. Instead of 40 race days over seven weekends, it’ll be 40 over eight weekends. This is good for restaurants and hotels, and good for the horseplayer with larger fields thanks to one less day of racing each week. 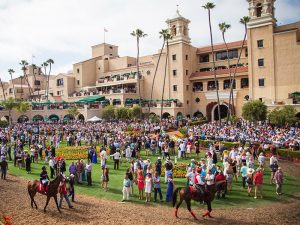 At Del Mar, the goal centers on safety in an effort to steady racing in California following the death of 30 horses – and the worldwide criticism it received — at the recently concluded Santa Anita Park meet. A summer without drama, other than thrilling stretch duels in the big races, would be welcomed by all.

Speaking of California, horse racing needs to keep going – it’s the lifeblood of thousands. Just think what would happen if racing closed down in California … do other states follow suit? What about the entire United States? Look, I don’t think this will happen, but I’m hoping the industry will get out in front of the issues — be proactive in the aftermath of some calling for an end to racing because of all the problems at Santa Anita.

Del Mar, under CEO Joe Harper, believes it has taken the proper initiatives for this meet.  In 2017, a new dirt surface was installed that drastically reduced equine fatalities from 17 in 2016 to five in 2017 and six last summer. More vets have been hired to watch morning workouts and there will be a limit on horses during morning training sessions.  There will be fewer races run each day and perhaps most importantly, there will be a five-person panel that will review horses entered to run each day.

Del Mar and Saratoga are just two of the many tracks running this summer – but they are the headliners. What happens there resonates throughout the entire racing industry. While the big summer races will be televised by NBC and FOX, daily coverage will be intense by the Daily Racing Form, Bloodhorse, and other racing outlets, including usracing.com, and there’s likely to be more interest than usual from other national and international media outlets.

And, there’s sure to be more watchdogs waiting in the wings to pounce on anything that might be considered an issue at the track – and we’re not just talking about whether a horse should be DQ’d or not. Would anybody be surprised if there were organized protests outside the Spa or Del Mar? I wouldn’t. Should there be a fatality, what would the reaction be? Not good.

Is this fair? No. Horse racing has been around forever. It has outlived kings, queens, dukes and duchesses and will likely outlive you and me. Those who think banning the sport is “essential,” don’t understand the economics of the industry; an industry that creates and maintains thousands of jobs.

There’s more to racing than nine races on a Tuesday at Parx or Finger Lakes. It’s an economic engine that would difficult to replace. There’s a trickle down impact with horse racing that stems from farms to breeders, hot walkers, and exercise riders to those that take your bets and clean the bathrooms at the racetrack. If one track closes, hundreds are affected as we’ve see over the past few years – Hollywood Park, Hazel Park, Suffolk Downs, etc.

While fans can get hurt by a foul ball in baseball, or football players can be seriously injured, or racecar drivers can be killed in a crash, horse racing is different – a thoroughbred is perceived to be forced into action while a human can make a choice. Let’s point out thoroughbreds are born to run. If they were set free, they’d run in the wild. There are many who view thoroughbreds as victims — being forced to train and race — but for the most part, they are treated, fed and provided for better than most animals. 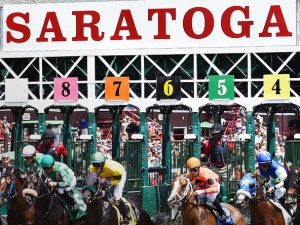 I would never diminish an equine fatality.  To say that’s part of racing comes off as cold and insensitive. Unfortunately, it is part of racing. Nobody is more devastated when a horse dies than those who work with them on a daily basis.  We have people in the sport of horse racing looking for solutions, and as long as this continues the sport should go on.

I trust that Saratoga and Del Mar are ready for the barrage of questions seeking solutions in curtailing or ending horse fatalities. I hope that they have the right people in position to deal with the situation should there be a fatality. This summer, I believe there are two things that will happen– fatalities and questions by the media, activists and public when it occurs. I also believe that the tracks will be prepared for any onslaught of negativity.