At Long Last, You Can Call Jockey Craig Perret ‘Racing Hall of Famer’

To be inducted into the Hall of Fame in any sport not only requires tremendous skill; it also takes a good deal of luck. You must be associated with the right people at the right time and in the proper mindset to rise to the highest level of your craft. This is doubly true for horse racing, where man and animal team up to what so often seems like chaos — a sport in which wins and losses, sometimes coming down to microscopic margins, can be determined by decisions made in a split-second or months in advance.

The fickle nature of racing is not lost on Craig Perret. When the former jockey finally enters the National Museum of Racing and Hall of Fame on Aug. 2 in Saratoga Springs, New York, he will do so because of his undeniable ability as a rider, but also because of the people and animals he was fortunate enough to cross paths with during his career, both of which he is quick to credit with his success. 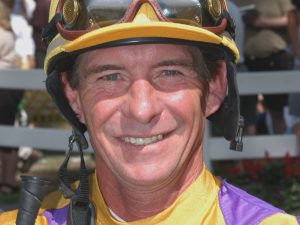 “So much depends on being around the right people; it’s a team job from the backside all the way to the front side,” said Perret. “The greatest thing about my part of it was when I walked out to the paddock and got to see all my friends. Walking out to see (trainer) Jimmy Croll and (owner) Bob Levy, they were like family. Winning for someone that’s so important in your life, that’s pretty special, but I knew when they said, ‘riders up,’ the whole spotlight is on me. That next 10 minutes is just me and the horse. No one else can help us, and that’s a good feeling, too.”

Though it didn’t receive the attention of racing’s Triple Crown drought from 1979 to 2014, Perret had quietly endured a long drought of his own until this year. Since first becoming eligible for the Hall of Fame in 1994, Perret waited patiently to find out if the merits of his illustrious 30-year career  — 4,415 wins, including the 1990 Kentucky Derby aboard Unbridled and the 1987 Belmont Stakes with Bet Twice — were worthy of the honor. In that span his name appeared on the ballot 12 times before voters finally granted him entry in April.

“To get on the ballot, that’s a good deal on its own,” said Perret, now 68 and living with his family in Shelbyville, Kentucky, where he operates a small breeding operation. “I don’t sit back and wait for something like that to happen; if it’s gonna happen, it’s gonna happen. And guess what, the guy upstairs, this is the time he decided for it to happen for a reason. It’s going to be really nice being there because I know so many of the people; it’ll be like a big reunion.

“I’m sure it’s going to be quite emotional for me because I’ll get to look at everyone I know and worked with and be on the big stage again. It’s the top of the line,” he added.

Born in New Orleans, the plucky Perret couldn’t have foreseen how fruitful his career would be, but he did know from a very early age that he was meant to be around horses. He began riding at five years old and by the age of nine was riding in match races in rural Louisiana, which consisted of nothing more than owners driving trailers up to open fields and pitting two horses against one another to see whose was faster.

From those humble beginnings he made his foray into the thoroughbred industry in 1966 at the age of 15, and just a year later he led all apprentice jockeys in the U.S. in earnings. His sudden appearance on the scene proved to be no aberration. Following his 1967 breakout, Perret rode more than 100 winners for the next 15 years, highlighted by a magical run in 1990 in which he took home a career-high $11.7 million in purses, won the Eclipse Award for Outstanding Jockey, and captured American racing’s most coveted prize, the Kentucky Derby.

“With the Derby, just to ride in it was great enough,” said Perret. “It’s the greatest race in the world. My first Derby, even after it was over I felt like I was in a dream somewhere. I was grateful for that, and then I started getting a few live ones and I was second and then third. Then when I finally won it with Unbridled it was like, ‘I don’t know where I go from here.’ I mean, I know I keep working, but it’s not like I have another goal I have to go get. Whatever I got after that was just a gift.”

Though he had reached the mountain top in the Derby, Perret piloted a plethora of other acclaimed thoroughbreds to victory in big races during his career. He won the inaugural Breeders’ Cup Sprint with Ellio in 1984, captured the ‘87 Belmont by 14 lengths with Bet Twice, won the Sprint again in 1990 with the filly Safely Kept and took the Breeders’ Cup Juvenile Fillies with Storm Song in 1996

The litany of Perret’s major wins and celebrated mounts is certainly what one would expect of a Hall of Famer, but his resume becomes even more robust when you tack on his incredible longevity and consistency. Year after year Perret would visit the winner’s circle at a dizzying rate and emerge relatively unscathed from such a dangerous and taxing profession. According to Perret, this was not by accident. Each fall he would take a few weeks off to allow time for his mind and body to recuperate, which in retrospect he believes was paramount to his sustained success.

“Every year I would take a three- to four- week vacation to do the things that I enjoyed, like hunting and fishing, and to be with my family because when you’re young and just starting to be a success you don’t really have the time to put in with the family like you used to. You’re always busy,” said Perret. “I missed a lot of soccer games because your kids are playing sports at the same time you’re riding. You have to make sacrifices, but as I get older I started taking off certain days, and that helped a lot.”

Perret has much more time to spend with his family and indulge in his hobbies. Racing doesn’t dominate the landscape of his life the way it once did, but he still keeps himself busy breaking horses and keeping a watchful eye on the current state of the sport, particularly the riders.

As he is set to become immortalized as a jockey on Friday, effectively closing that chapter of his life, Perret can rest easy knowing his chosen profession, the one he knew was his destiny in elementary school, is in good hands.

“It’s not like an owner has to call up a trainer and say, “get this guy,’ because if he doesn’t get whoever his choice is, there’s another 12 guys he can call up and still get one of the top riders in the nation. The colony is great,” said Perret. “It was just a matter of time when I stepped down, when [Jerry] Bailey stepped down. The young ones coming up, they’re beautiful to watch ride.”

As Hall of Fame voters have unequivocally confirmed this year, Perret wasn’t too bad himself.

The induction ceremony starts at 10:30 a.m. ET at the Fasig-Tipton sales pavilion in Saratoga Springs. The event is open to the public and free to attend.