An Appreciation Harvey Pack, May The Horse Be With You

He promoted gambling but really did bet with his head, not over it. His persona of wise-cracking curmudgeon masked a love of racing. Most of his countless fans never met him, yet they considered him a friend. They knew Harvey Pack was one of them, suffering in the fellowship of pari-mutuel pain eased by those rare scores that keep you coming back.

He always ended his race recap show by hurling the day’s program at the camera in mock disgust and saying, “May the horse be with you,” a takeoff on the “Star Wars” line about “The Force.” Blending frustration with encouragement felt just right to horseplayers, who couldn’t get enough of the odd-looking bald guy with the glasses. 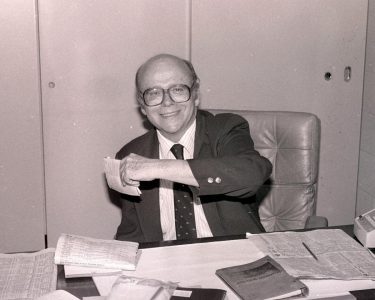 Pack had been retired and out of the public eye for many years, but when the news broke of his death Tuesday at 94, it hit a lot of people hard, including me and two of my horseplayer buddies. Joel Einhorn said, “It feels like I lost a friend.” David Hirsch, my college roommate 50 years ago, said, “Harvey was a big part of my enjoyment of racing, especially at Saratoga. Sorry to hear this.”

Me, too. Forty-five years in journalism hardens you to death, especially when it’s a very old person who had such a full life, but when I saw “Harvey Pack” on the subject line of that email, I dreaded what it would contain. So did so many others.

“Man, this brings tears to my eyes,” horseplayer Bill B. tweeted. “I don’t think I’d be the person I am had Harvey not existed. His interviews and race replays were essential to my early years. He surely wasn’t some suave TV personality, but he was the voice of racing for me when I entered this game.

I never appeared on Harvey’s SportsChannel show, but we did have two brief encounters. He and his wife, Joy, and I were on the same flight from Long Island to the 1993 Breeders’ Cup at Santa Anita. I introduced myself, he politely said he enjoyed my writing, which flattered me immensely, and we chatted before takeoff. Many years later I sat next to him on the dais of the Daily Racing Form’s “Paddock Club” seminar at Siro’s restaurant in Saratoga Springs. After I touted the audience on “a live longshot,” Harvey elbowed me and showed me the program, where the horse was listed at 2-1. Oh. Not only wasn’t he a longshot he would finish last. For some reason, that memory fills me with absurd pride. I’d had a moment with the great man.

Like most who leave their mark, Pack got an early start in what eventually turned into a career. As a teenager he’d ride the subway from Manhattan to Aqueduct on Saturday mornings to save seats for his father and his friends. Four decades later, as part of NBC’s 1985 Breeders’ Cup coverage at The Big A, Pack proudly pointed out the subway stop that was still funneling people to the track.

Pack loved to gamble but never let his passion get out of control.

“A day without betting is like a day without sunshine,” he said in a 2018 interview on YouTube. “I play the races every day, but I never bet big, and I never did.” He advised viewers to keep track of wins and losses and never to put a lot on a short-priced “sure thing.” His mantra: “Hardly is now a man alive who paid the mortgage at 3-5.”

Pack’s endless supply of one-liners and hilarious anecdotes always had the ring of truth about the sport he loved. “What a wonderful life I’ve had,” he told Peter Thomas Fornatale, who co-wrote his 2007 autobiography, “May the Force Be With You: Pack at the Track.” “I was happy.”

Andy Serling, his protege and a longtime handicapper for the New York Racing Association, announced Pack’s death on Twitter. “He was a great and positive influence on my life, both personally and professionally,” Serling posted. “He brought a lot of joy to many racing fans as well.”

To Pack, the pinnacle was the Affirmed-Alydar rivalry of the late Seventies, and 1948 Triple Crown hero Citation was the best he ever saw. Yet his all-time favorite was a former $1,500 claimer he fell in love with as a teenager. Stymie, born in 1941, was an iron horse who had 35 wins, 33 seconds and 28 thirds in 131 starts and retired in 1950 as the world’s leading earner. His career’s progress mirrored his last-to-first charges, because he never won a stakes until his 60th start.

Like Pack, Stymie didn’t hit his stride until later in life, so it’s fitting that this “people’s horse” was the celebrity Everyman’s No. 1. Both were beloved for excelling with a unique style. In 1975 Stymie was voted into the Racing Hall of Fame across the street from Harvey’s favorite place, Saratoga Race Course. The Hall has a Media Roll of Honor, and Pack belongs on it.

Someone with the Twitter handle of Locust-Manor would second my nomination.

“There aren’t many people in racing, or life, for that matter, whose lives impacted so many other lives,” he posted. “Harvey was one of those precious few.”