A Horse Named Little Enis Almost Lived Up To His Namesake

Somewhere in Rockabilly Heaven, the All-American Left-Handed Upside-Down Guitar Player, Little Enis (rhymes with p—-) must be stomping all over his electric GUItar, mad as hell for dying too soon and missing out on the Breeders’ Cup.

We are referring here to the person, not his namesake horse. But come to think of it, if Little Enis the horse had only run fast enough to get out of River Downs, he might have run in one of the Cup races. Dreams are made of this stuff.

Little Enis the man, “an amazing little stud” as his biographer Ed McClanahan of Lexington described him, was dead as a stuck hog’s snout by 1984 when the Breeders’ Cup held its inaugural run. Enis had passed in 1976.

He passed too soon to witness the superstars in Lexington, such as Alydar winning the Blue Grass Stakes and Spectacular Bid’s mouthy trainer, Bud Delp, coming in from Baltimore to raise the hackles of Kentuckians with a crude call to arms from the corner of Spectacular Bid to wit: “Bring on Man o’ War.” Right.

Most of all, Enis did not live to witness the Keeneland bugler and his fellow musician, Buckey Sallee, call horses to the post when the roving Breeders’ Cup finally rolled into Keeneland in 2015, a bit late for Buckey, who had transitioned into bugler emeritus status on retiring after 50 years of bugling horses to the post.

Buckey Sallee gets into this story having played trumpet and tenor sax with Enis, blowing his horn while performing for the Amazing Little Stud’s Fabulous Tabletoppers. The Tabletoppers played in some of the scruffiest, mangiest local bars you could possibly conjure in your modernized, sanitized imagination. Sallee also played with renowned artists such as Duke Madison, Jerry Lee Lewis, Boots Randolph, Charlie Daniels, Fats Domino and Pee Wee King but it was his tenure with Little Enis that people remember most about the Keeneland bugler.

Little wonder. The legend of Little Enis is unforgettable – untouchable — in the lore of horse country, right up there among Blue Grass royalty with Man o’ War. Pictures of Little Enis hang on walls in a lot of places. When a local arts facility held a tribute for Enis some years following his death, the building was so packed they had to turn people away. 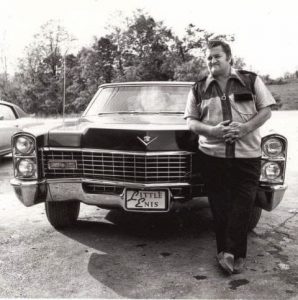 Enis assumed his high place in local culture because he admired race horses and lived large here in the heart of horse country under the heading of “local color.” He was a racing fan by association, because he certainly heard a lot of horse talk in the places where his name flashed from the marquee. He might have seen a few local bookies, too, actively working the audience. Most certainly, a lot of racing people paid to see him.

We’ll begin our story in Hogue Hollow, Kentucky, where Enis (nee Carlos Toadvine) had his named changed by the locals to Toadavinney. When he moved on up to Lexington as a young man, he brought musical talent honed in the holler. He spent most of the remainder of his life in the Bluegrass, impersonating Elvis and flirting with the aging go-go girls at clubs that sank deeper downwards on the scale of class the older he got. He took one side trip to go on the road with Jerry Lee Lewis and Fats Domino but ended up back in Lexington, where he continued to give the locals his Jerry Lee Lewis version of ‘Great Balls of Fire.’ He was made for that piece of music.

Enis perfected a style of guitar playing that was truly bizarre. McClanahan recalled his first sight of our Amazing Little Stud “stomping around atop the bar flailing away at one of those enormous old electric guitars that looked like an Oldsmobile in drag – left landed! He’s playing it left-handed! And upside down besides! – this pugnacious-looking little banty rooster with a skintight gold-sateen cowboy shirt and an underslung lower jaw and a great sleek black-patent leather Elvis Presley pompadour and long Elvis Presley sideburns and a genuine Elvis Presley duck’s ass…this 5-foot-4 watch-fob knickknack of an Elvis up there just a-stompin and a-flailin’, laying down a rendition of “Blue Suede Shoes” that would have done the master proud.”

Eventually Enis’ name was appended with “the All-American” title in recognition of a bar owner’s near-All American status on the University of Kentucky basketball team. This was Linville Puckett, playing like a house on fire until he abruptly walked away from the team in midseason, 1955. Enis was playing at The Palms when the de-frocked basketball star Puckett took over the business. Some joker thought a good promotion for the bar might be Enis designated an All-American left-handed upside down guitar man playing for a guy who might have been All-American if he’d only stuck around. Enis’ title stuck to him the rest of his life.

On a personal note, I saw him perform at Boot’s Bar on South Broadway, across from the trotting track. I don’t recall much about him because I guess my own head was still at the track, not at Boot’s Bar. McClanahan, however, spent what seemed a lifetime in Enis’ company. Thank goodness he did, otherwise Little Enis would be no more than ephemera waning with the passing generations into nothingness.

McClanahan extended Enis’ fame beyond Lexington, with an article published in Playboy, then reprinted in two of several books McClanahan authored: “Famous People I Have Known” and “I Just Hitched in From The Coast. What coast, you ask? The Left One, where a young writer needed to be in the 1960s and ‘70s, honing literary talent with real-life adventures, with Timothy Leary (the LSD man) and sidekick Ken Kesey as guides. McClanahan introduced the two in his living room out there on the Coast.

Back in Lexington following his sojourn Out West, McClanahan followed Enis through tenures at bars where you didn’t dare look up as someone might interpret this as a challenge with The Challenge bringing on a fight. A place called Martin’s, to where I have never been, comes to mind. Enis was bringing them in by the busloads when he played Martin’s, but the place was just a bit too dicey for civilized tourists.

You might be wondering how Carlos Toadvine became Little Enis. This was an easy transformation. An early Enis venue, the Zebra Bar, discovered the name “Carlos Toadvine” was too long to fit on the marquee. You can only imagine what the marquee directors were thinking when the switcheroo took place. McClanahan described the Zebra as “a musty, murky coal-hole of a place across Short Street from the Drake Hotel.” The Zebra Bar and the Drake Hotel, known headquarters of bookies, are haunts long gone, and with them went a big sigh of relief from Lexington’s upstanding set.

So. Little Enis he became, our Carlos Toadvine, and when McClanahan caught up once more with the man upon hitching in from the Coast, Enis was in the decline of his musical career, playing at another dive known as Boots Bar. A sign at the venue announced, “The Man with a Golden Voice, Little Enis!” Someone appended his surname with the letter P. No one bothered to erase the P.

At Boots Bar, next door to unworthy pile of bricks known as the Scott Hotel, Enis found himself competing for top billing with the local go-go girls.

McClanahan was trying to overcome the culture shock of witnessing this frail expression of humanity when it came time for the go-go lady to exit the stage for Little Enis. “And now,” cried out the announcer, “’here he is, the Man with a Golden Voice, and a Million Friends, Little Pee—uh, Little Enis!’”

The bottle got to Little Enis. But in his memory, 12 years following his death, a foal was born in Kentucky. This was Little Enis the horse, son of an Argentine sire named I’m Glad out of a mare named Summertime Dream. The year was 1988. The bay colt struggled to its feet in the foaling stall and grew up to be gelded and running at River Downs and Turfway Park. He won four of 30 starts before breaking down in 1993 at Mountaineer Park.

Possibly only a few at these tracks recognized the name and the man it stood for. But if these tracks were down the road in Lexington, Little Enis the horse would have had a fan club. Here was proof that the All-American Left-Handed Upside-Down Guitar Player had come back, sort of like a reincarnation here in the Bible Belt – as a horse mind you, still a-stompin’ and a-flailin’ away like he always did, our Amazing Little Stud on fire to Blue Suede Shoes. Bring on Man o’ War. It doesn’t get better anywhere than this.